#Giveaway Mayhem and the Marquess by Win Hollows

This post is part of a virtual book tour organized by Goddess Fish Promotions. The author will be awarding a $10 Amazon/BN GC to a randomly drawn commenter. Click on the tour banner to see the other stops on the tour. 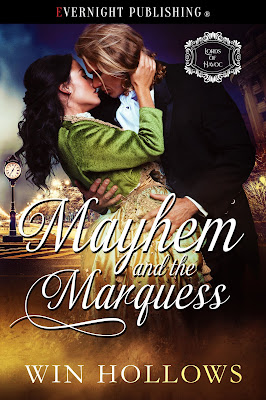 Daughter of an infamous murderer, Ivy Wollard now wields knives instead of needlepoint to survive in a society where no one wants her. When the Marquess of Blackbourne comes along and ruins her chance at a better life, she decides she’d rather have her toes eaten by eels than agree to his proposed scheme. There’s no way her surrender has anything to do with the mesmerizing angle of his jawline or the wicked twinkle in his eyes.


But Asher Blackbourne has a secret. He knows it’s just a matter of time until he goes mad and loses his illustrious title, so when Ivy falls into his path, he realizes he could use her to keep his house of cards from falling down. If every illicit touch between them doesn’t drive him mad first, that is.


Yet Ivy cannot escape her grisly legacy and the dark desires of her father’s admirers. What if violence runs through her veins, and no one who gets close is safe? Mayhem will descend as this rake finally falls for the enigmatic woman who might be just his brand of poison…Er, cure, of course.


Blackbourne came towards the clawfoot tub, running a finger along the porcelain edge.

Ivy shrank back instinctively into the steam.

She inhaled as his eyes flashed promises of things she wasn’t sure she understood.

“Your bathwater is quite thoroughly unrevealing with all those suds. What a pity.” He sighed, pulling the nearby chair closer to the tub and lowering himself down into it. “Will you wash your hair for me?”

Ivy blinked “Right now?” she choked, reaching up to pat her hair, which she’d styled in a high chignon.

He nodded, his posture relaxed, although Ivy knew this to be deceptive. He was waiting to hear her answer with taut focus. When she didn’t move a muscle, Blackbourne interrupted her tumultuous thoughts with a soft suggestion. “Let me help you.”

The words reached out to her with tendrils that wrapped her consciousness in a sensual fog, causing the hair on her nape to rise. This was not done, she knew. A proper lady would never allow a gentleman to touch her hair, much less while she bathed. But what about any of their arrangement was proper in the first place? Who would even know?

So she reached up slowly so as not to disturb the water covering her chest and drew the stickpin from her hair, letting its length fall in a heavy coil down her back.

His sharp intake of breath echoed in the tiled chamber.

Was that a good thing? Ivy’s body trembled as she watched him rise and come towards her through the steam… 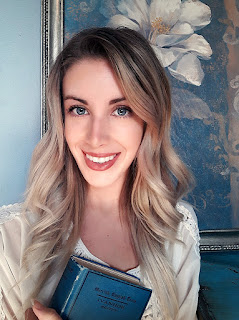 Win Hollows is a multi-award-winning romance fiction writer who still believes that love conquers all. She currently lives in Colorado with her own real-life hero and their three fur babies. Her passion is writing stories about love and intrigue and will continue to do so as long as characters keep having conversations in her head. Hollows’ other interests include traveling to places with delicious food and languages she can’t speak, having wilderness adventures, and, of course, reading! She loves connecting with readers and fans on Facebook, Instagram, and through her website.

Thank you for hosting

Sounds very exciting and I love the cover.

Great excerpt! Thank you for sharing.