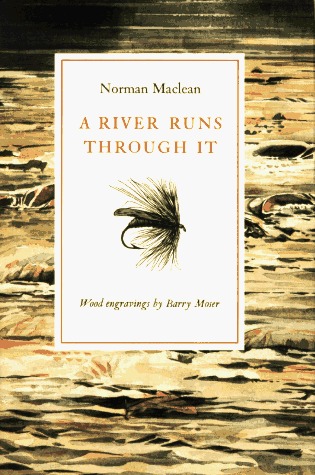 Entertainment Weekly says – In his semiautobiographical story collection, Maclean paints a sumptuous portrait of the state’s beauty.
Summary form Goodreads:
Just as Norman Maclean writes at the end of "A River Runs through It" that he is "haunted by waters," so have readers been haunted by his novella. A retired English professor who began writing fiction at the age of 70, Maclean produced what is now recognized as one of the classic American stories of the twentieth century. Originally published in 1976, A River Runs through It and Other Stories now celebrates its twenty-fifth anniversary, marked by this new edition that includes a foreword by Annie Proulx.

Maclean grew up in the western Rocky Mountains in the first decades of the twentieth century. As a young man he worked many summers in logging camps and for the United States Forest Service. The two novellas and short story in this collection are based on his own experiences—the experiences of a young man who found that life was only a step from art in its structures and beauty. The beauty he found was in reality, and so he leaves a careful record of what it was like to work in the woods when it was still a world of horse and hand and foot, without power saws, "cats," or four-wheel drives. Populated with drunks, loggers, card sharks, and whores, and set in the small towns and surrounding trout streams and mountains of western Montana, the stories concern themselves with the complexities of fly fishing, logging, fighting forest fires, playing cribbage, and being a husband, a son, and a father.
My Review:


Firstly, I did not know this was turned into a movie. Now that is on my list.
The writing in this book was smooth, cohesive, eloquent, and smart. This novella was mixed with sadness of real life as well as the joys. This story has more than one level, at the surface, it is a good and well written story about Maclean and his father and brother; his family. They all have a shared bond of fishing, it is like the air that they breathe, what seems to hold them to hold them together.
However, going beneath this well-crafted story, I think the moral, the reason behind this book is: relationships that we have, memories that we create with those we hold dear, and the bonds that are made. I think the saddest but truest message to take is, from all that we can learn from this book is, those that are the ‘last survivor’ of those memories, those bonds that were made during the yesteryear's, and the relationship that were made before it all changed and while it all changed.
I can definitely see why this is a classic. I’d recommend this to all.
Posted by Elisha German at 12:00 AM