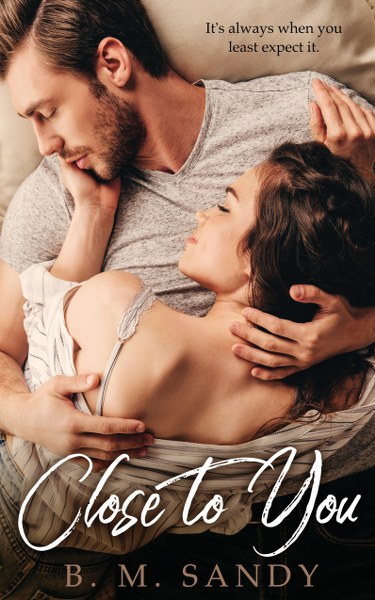 Close
To You
by
B.M. Sandy
Genre:
Contemporary Romance


Michele
Coffey is on the run. After arriving in Brooklyn four months ago, she
perfected the art of looking over her shoulder. Her only goal is to
make it through another day without being discovered.


When
Iain Sheppard unexpectedly walks into her life, Michele’s first
instinct is to retreat. Falling in love is not in her plan, and after
what she’s been through, she’s not ready to trust anyone yet.
Maybe ever.


Iain
is a rugged, sexy freelancer, born and raised in Brooklyn. After
showing up at the bar she works at one night, he leaves a note,
asking to show Michele the city. It goes against every rule she has
set in place for herself. She wants to forget about him and his
offer, but something about him draws her in. She can’t shake it, so
she agrees.


What
Michele doesn’t know is that Iain knows more about her than he’s
letting on.


The
clock is ticking. Michele knows that her time is running out,
especially after a stunning reveal that draws her and Iain even
closer.


As
their attraction grows deeper, she can’t stop looking over her
shoulder, waiting for inevitable disaster. And she can’t help but
ask herself if she escaped one prison, only to lock herself into a
new one of her own making.


Will
she ever be set free?

“Are you lost?”
The sound of a voice, a male voice, snapped me out of my thoughts. I turned to look in the direction of that voice and saw a man staring at me, hands in his coat pockets, blue eyes piercing mine.
“Excuse me?” I asked, trying to add indignation to my question but failing miserably. I knew how I looked: windswept hair and reddened cheeks from the cold, holding a flimsy map of the city. I had been staring at it for too long, like a lost toursit.
“I don’t mean to be rude or anything. You just looked lost. Can I help you find your way?”
My eyes flicked to his full lips, tracing the line of a well-groomed beard, and then finding my way back to those eyes again. He didn’t look threatening, but I was immediately suspicious. He seemed awful friendly for being a perfect stranger, and any thoughts of him being a tourist were lost when I caught his mild accent. I had heard a lot of New Yorker accents since I got here, but for reasons unknown to me, his made me look twice.
He was handsome. Oh, who was I kidding? He was hot. A blush crept up my neck as I felt a strange feeling in my gut, knowing that I was reacting to a stranger in the street.
Jesus, calm down, I told myself. 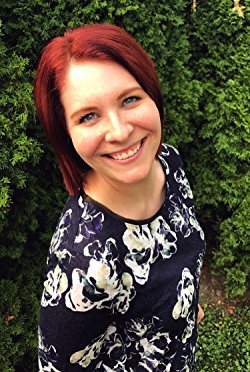 B.
M. Sandy lives in Youngstown, Ohio with her husband, one-eyed cat
child, Maia, and as of June 2017, a rescue dog named Dorothy. She’s
a lover of books, film, and all things imaginary. Someone to Stay is
her first published novel.