#Giveaway Counting on You by Laura Chapman

This is my stop during the book blitz for Counting on You by Laura Chapman. Read on for more information about of this book and there's an US only giveaway. This book blitz is organized by Lola's Blog Tours. The book blitz runs from 27 August till 2 September. See the tour schedule here. 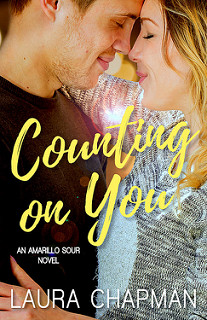 Counting on You (Amarillo Sour #1)

Is love worth the risk?

Math teacher Haleigh Parde has no desire to change her single status until she receives an invitation to her high school reunion. With her ex spreading rumors she needs a date and fast. Desperate times call for desperate measures and Haleigh finds herself meeting a blind date at a neighborhood bar called Amarillo Sour . . .

After watching Haleigh crash and burn, app developer Ian Henning makes her a proposition. If she'll provide honest feedback on his new dating app, he'll guarantee her a date to knock the socks off her former classmates. Even better, he—and the other Amarillo Sour regulars—will help her navigate the rocky road of dating.

Through setups ranging from awkward to absurd, Haleigh discovers her matchmaker might just be better than the matches. And Ian wonders if she's the answer to everything he's worked for professionally. Or is she something much, much more . . .


She must be crazy. While she’d cut someone out of her life for calling her that, it was the only logical explanation Haleigh could come up with as she downloaded a beta copy of XO On Demand onto her phone.
Only the day before she’d been set up on her first blind date ever. Now, here she was, giving online dating a shot.
What a difference a day made.
She’d been completely serious about never considering online dating. She knew people who had tried it—and successfully. Not that she judged, but it seemed like such a direct and confrontational way to meet someone. By putting your profile out there, you were proclaiming to the world that you were on the prowl.
In another five minutes, she’d be one of those people. After she finished the setup and the survey Ian assured her would be fun, she’d have her first string of potential dates. Brought to her through the magic of technology.
All because she couldn’t stand the idea of her classmates judging her.
If she was one of her own students, she’d tell them it didn’t matter. That after high school, no one cared what people thought. And she’d be lying.
The download completed, and the app opened on her screen. She followed Ian’s directions to create her account. His play-by-play wasn’t entirely necessary. The directions were pretty self-explanatory, but he seemed eager to help. It eased her nerves. Some.
“This where it gets interesting.” Ian clicked a button, taking her to the next page. “Instead of having you answer fifty questions about who you are and what you want, we’ve created a quiz of sorts. Would you rather go camping or stay in a five-star hotel? Which breakfast looks most appetizing? What—”
“I’ve got it.” She flashed him a grin to soften her tone, but she needed to concentrate.
There were so many questions. None of them were too complicated or earth-shattering, but she had to choose correctly. Her future lineup of men depended on it.
Question One: Which of these dishes would you order right now?
She selected a basket of chicken strips with fries.
“That’s what I’d pick, too,” Ian said. “What do you use for dipping?”
“Honey mustard.”
“Barbecue.” He shook his head. “I knew there had to be something wrong with you.”
At least his teasing made this a little less nerve-racking. “You guys aren’t going to use these answers and sell my information to restaurants now, are you?”
“Of course not.” But he tapped his chin thoughtfully. “It isn’t a bad idea, though.”
Question Two: Where would you rather spend a Saturday afternoon?
She didn’t even have to consider this one. She picked “Binge-watching TV in my bed.”
“What’s your go-to show?”
“You heard that one last night,” she reminded him. “Doctor Who. But I’ve been known to do a Lord of the Rings or Star Wars marathon from time to time”
“Which episode is your favorite?”
“Five.” That’s what everyone always said. There was probably something about the bad knocking down the good at the end of the Empire Strikes Back that made a person seem deep. After Greg had explained that to her years ago, she’d made it her customary response.
Only when she was being totally honest, she’d admit she liked Return of the Jedi best. She loved those Ewoks.


You can find Counting on You on Goodreads

You can buy Counting on You here: 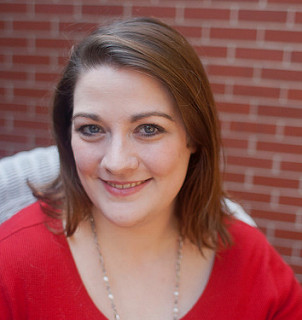 Laura Chapman is the author of sweet and sexy romantic comedies. A born and raised Nebraska girl, she loves watching football, traveling, crafting, and baking. When she isn’t writing her next story, she is probably working at a museum by day and binge-watching Netflix with her cats Jane and Bingley at night. So, basically, she’s living large.

There is a tour wide giveaway for the book blitz of Counting on You. One winner will win a Amarillo Sour Starter Kit, that includes two shot glasses, two coasters, a bottle opener and pens with the bar’s logo on them plus a $10 Amazon card. US Only.

Posted by Elisha German at 9:24 PM