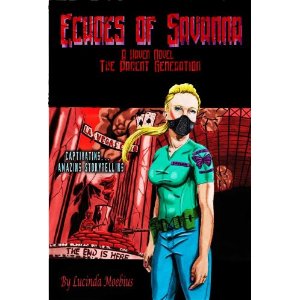 A deadly virus...Is any place safe?
Every generation has their defining moments, events that change history and turn the course of lives. Forever will the children of that generation be defined  by those moments.
Savanna Taylor is a medical doctor in 2036, the same year terrorists release a series of plagues and viruses into the world. She is a nineteen year old Brain Trust whose tasks it is to find a cure for the disease and develop vaccines to prevent their further spread. The world is thrown in turmoil and Savanna needs to find a way to survive  with her sanity and family intact.  She needs to find a safe Haven for herself and for those she loves.
Can Savanna cope in a world in constant flux brought on by war and disease? Can she save the world and protect her loved ones or will she make the ultimate sacrifice? How will she be defined?
*                                             *                                          *
When I first started this book I really liked it. Then it got weird for me at times...Because of the Indian spirituality. Savanna has the brains and the willpower to figure this disease out, and while at the building helping all the sick she gets attached to this one girl who is progressed in the disease. She than got attached to the young girls Aunt and Uncle. The Uncle begins to become like a second father to her; the reason why I say it got weird for me at times is because Savanna is with the young girl and the Aunt when the young dies. She races outside and the Uncle has her close her eyes to have each of the four winds help her emotionally, physically, mentally and spiritually. That got a bit weird for me. But other than that I enjoyed the book and it makes for good discussion. I loved that Savanna's character was so committed to her work and helping people. She put her heart and soul into her work. She put her patients and her work before herself. I also loved the fact that she didn't refer to her patients as patients. She actually got to know them and their names. Which is why she took it so much harder when a patient of hers died. She became emotionally involved with her patients in the sense that she built a friend to friend relationship with them. I loved that about her. It didn't give her that coldness that some doctors have because they won't become emotionally involved.
It also was refreshing to read a book that was based in the future and didn't have to do with aliens or vampires or people that turn into some kind of vampire or something of that nature like so many books and movies out there.
All in all, Echoes of Savanna is a good read. I would gladly recommend this book. I plan on reading this book again. It didn't make my top favorite reads of the year because it did get a little weird/odd for me at times. I would go into more about the book....but I would spoil that and what fun is that...?
I received this book for review from Media Guests
Thank you Cheryl for allowing me to partake in the blog tour:)
Posted by Elisha German at 12:01 AM