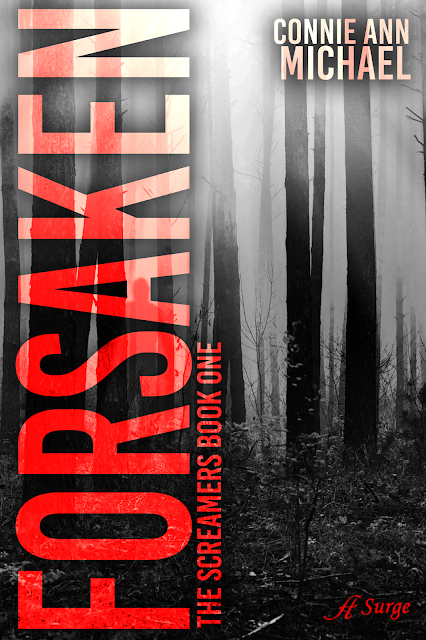 Eighteen-year-old Oli cannot remember life outside the barrier, a life before the oil spill that poisoned human kind, killing half the population and infecting the other half until they deteriorated from the inside out, forced to walk the earth as Screamers. It’s a dangerous new world in which barely anyone makes it past the age of twenty, and Oli’s time is running out.

Studying the Bible, Oli searches for words to help restore faith in a lost world, and when she receives a message from God telling her to leave the barrier, she knows what she must do. There’s only one problem: Her best friend, Coi, doesn’t believe her, and he’s showing the first signs of infection. But before she can convince him to leave with her, the Governor quarantines Coi and orders his execution.
​
Oli risks it all to rescue Coi, and they set out to find sanctuary away from the safety of the compound, not knowing who or what will get to them first: the Governor, the illness, or the Screamers. When they stumble upon a group of uninfected humans hidden among the rubble of an apartment building, they think they’ve found their salvation. But not everything is as it seems, and their enemies are closer than they thought.

I didn’t want to argue the fact that their need to survive was futile seeing as they were as good as dead, infected with a sickness that if there was a chance of a cure, we certainly didn’t have any way of finding it, but I also didn’t want to agree with her. The Governor had been in control for a few short years, and words used when discussing the methods he had for removing those who questioned him had to be chosen more carefully these days.

Bliss stared out into the growing darkness. "She didn’t do anything wrong."

"She questioned," I said quietly.

I shook my head no, but in my heart I knew it was dangerous to question the Governor and his methods. I understood his need to control us. In the beginning, there was no organization and mistakes were made that we continue to pay for today.

"She told the guard she was too sick to work. She snuck out when they were watching the gate." She glanced up at me. "She was with child." Her big eyes blinked and a tear fell. "I would have had a cousin."

I opened my mouth to respond, but words had left me. I wasn’t sure where to start on the list of disturbing questions her words put in my head. The biggest being why she thought her aunt had had a choice in her exile. Finally, I said, "I’m sorry."

"It was her terms not theirs." Bliss let out a long breath, releasing her negativity. "Tell me something good." She wiped at her cheeks with one hand. Her knuckles whitened as she gripped the fence tighter with the other. I placed my hand over hers. When darkness fell completely and the Screamers became frenzied for food, they would come for something as small as a finger. Even the smallest scratch from their infected nails could cause the infection to spread.

"You’re here for a reason. If you weren’t supposed to be here, you wouldn’t be," I said.
The rasps of the Screamers were getting louder as the sky became fully dark and the rain began.

"Please, Bliss," I whispered. "Please. Come to dinner with me."

One of the Screamers came to us, head cocked to the left, jaws chomping at nothing. Bliss took a step back, finally letting go of the fence.

The vacant eyes of the walking corpses drew me in. Many called them lost souls, but they weren’t. These were empty shells of people. People who’d been loved. I’d spent many hours looking into the weeping, yellow eyes of the sick, trying to understand. But when there is nothing in them, there’s nothing to find.

Bliss didn’t divert her eyes from where they stared. "You can go, Oli."

About Anaiah Press: Anaiah Press is a Christian publishing house dedicated to presenting quality, faith-based fiction and nonfiction books to the public. Sign up for our Anaiah Press Reader Newsletter and/or Blogger Blog Tour Signup Newsletter to be entered into our summer giveaway.

Sign up for Anaiah Press Newsletter to take part in sneak peeks, giveaways, author/staff advice and more!
http://eepurl.com/cU-BUf
Posted by Elisha German at 5:00 AM