**Giveaway** Once Upon A Lady by Addie Jo Ryleigh

All it takes is Fate to entice him with the very thing he never wanted.

ONCE UPON A LADY 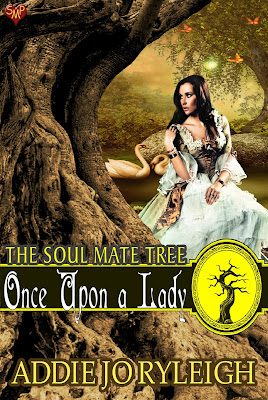 Respectable
Lady Katherine Baxton, striving to meet the requirements of her station, has
become the ultimate dutiful daughter. And now, the Duke of Blackthorn’s
betrothed. Far from a love match, Kate is nevertheless determined to do as
expected and marry. That all changes the night she panics at her impending
future and runs, stumbling upon a private grove, a mysterious tree. . . and a
half-naked man.

The
youngest son of a viscount widely thought to have purchased his title, Jackson
Cooper demonstrates his disdain for the aristocracy by affording himself every
luxury available—drinking, wenching, and gambling—while eschewing anything
representing the ton. Jackson has little care for his reputation and no desire
to marry. His escape from London is all but complete.

Until
fate—in the form of a beautiful, mysterious lady—interrupts his plans, enticing
him with the very thing he never wanted.

Kate felt his approach before she saw him. Which wasn’t all that surprising since her body had remained mindful of his presence. Fighting the impulse proved fruitless.
When his tall frame blocked the sun and cast her in shadow, she knew besides giving him a direct cut, she had no escape. If only she hadn’t ventured from her sister’s side. At the time, abandoning Helena had been her singular option since their slow stroll through the gathering had traveled too close to the very man standing beside her. She’d been delaying the inevitable.
Kate was now alone, as she tried to keep her attention on the lawn activities before her, hoping no one would witness what was about to happen.
“Aren’t sprites confined to the trees?” His deep voice washed over her.
She didn’t turn to acknowledge him. “How nice to see you properly dressed for once.”
His chuckle warmed her. “Are you following me?”
An unladylike snort refused to be repressed. “Hardly. You are rather difficult to overlook, being the only unknown face here.”
“That’s not true. You’ve seen my face . . . as well as other, more interesting parts.”
Kate wished she’d listened to her sister and worn a bonnet. Anything to mask the heat flaring in her cheeks.
Thankfully he remained at her side and hadn’t a clear view of her face. “We have not been introduced. I can’t be seen speaking to you.”
“Then let us go where we can't be seen.”
Her heart raced at his boldness. Why was this man so tempting? She was spoken for, though still unofficially. Proper ladies didn’t follow strange men to private locations, regardless of their marital status. “Absolutely not.”
“Even if I have something of yours?”
Blast! Her ring. Given her luck lately, she would have lost it in the grove of all places. Her aunt would toss in her grave knowing Kate had misplaced her gift.
“A true gentleman would return it.”
His deep laugh caused her pulse to flutter. “I’m no gentleman. Or haven’t you heard?” 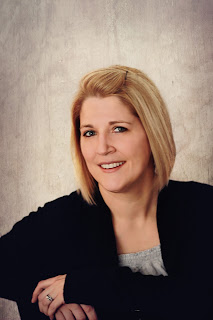 Addie
Jo has lived in the same cold-winter-hot-summer area of Minnesota her entire
life. Sharing in the raising of her three extremely rambunctious boys is her
very understanding husband who endured being dubbed “The Duke” by his
co-workers. Keeping Addie Jo company while she writes (besides her wonderfully
loud children) is her yorkipoo, Bella, who is never far from her side. And
recently the newest addition to their family, a black lab named Max.

Addie
Jo has always had a love and passion for romance books and became engrossed in
historical romance (particularly Regency) soon after graduating from Lurlene
McDaniel’s young adult books. Currently, she reads any genre that has a great
emotional story that keeps her reading into the early hours of the morning.

Addie
Jo has a bachelor degree in accounting and is a financial coordinator when not
playing chauffeur for her hockey-playing boys, cuddled up with a good book, or
writing her next story.