The Day Job is Murder by Carolyn Arnold 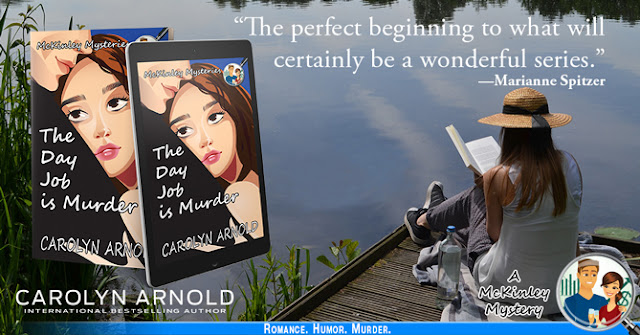 Is it just me or is Netflix addicting? With an endless number of movies and television shows, and no commercials, us mere mortals don't stand a chance. And, I must say that I am happy they're around. In fact, there's one series of shows, I have enjoyed many a night. The show is better than warm milk (and doesn&rsquo;t give me bad breath), but we'll have to become better acquainted before I give up what program I'm talking about. I also usually enjoy a bit of Netflix while I eat lunch, and during many of these, I was exposed to the television show


Maybe you watched it on Netflix, as well, or know the show otherwise, but for those not familiar with it,  was about a self-made millionaire and his wife. They were both beautiful inside and out—but murder was always around them. I fell in love with the couple and the interesting, yet light take on murder solving. This show inspired me to write the McKinley Mysteries with twists thrown in, of course.


Meet Sean McKinley and Sara Cain. Two murder detectives working for Albany PD, who are partners on the job, but long to be far more than that. Unfortunately, love, it can complicate everything, and for these two, it's best they remain friends for the sake of their careers. But, what if, by some miracle they could both walk away from their day jobs... Would that be enough to change everything?


I am tempting you to find out for yourself in <em>The Day Job is Murder</em>. Oh, and did I mention there&rsquo;s a murder investigation sprinkled into this series introductory short story, too? Yep. Romance. Humor. Murder.


Enjoy!
Carolyn Arnold
Book Overv
The bad guys aren't the only ones on his radar


For Albany PD homicide detective Sean McKinley, catching killers is the easy part of his job. Working next to his beautiful partner, Sara Cain, is what is difficult. It might have something to do with the fact that he&rsquo;s fallen in love with her, though. Fortunately, she feels the same way about him. But she&rsquo;s convinced they should just be friends.


If only there was some way to change her mindhelp.


Available in e-book and paperback

For more retailer links visit: http://carolynarnold.net/the-day-job-is-murder
About the McKinley Mysteries:


Romance. Humor. Murder. Are you looking for a murder mystery without all the graphic violence and foul language? Something that you can enjoy in an afternoon and walk away feeling good about afterward? How about a dash of humor and romance? If so, meet former detectives Sean and Sara McKinley. When a billionaire leaves them all his money, they no longer have to work, but they find themselves sticking to what they're good at—solving murders. Undercover, off the books, and around the world, they&rsquo;ll get to the bottom of things…and romance it up along the way.


This is the perfect book series for fans of Hart to Hart
Castle, Colombo, Monk, Rockford


Carolyn Arnold is an international bestselling and award-winning author, as well as a speaker, teacher, and inspirational mentor. She has four continuing fiction series and has written nearly thirty books. Both her female detective and FBI profiler series have been praised by those in law enforcement as being accurate and entertaining, leading her to adopt the trademark, POLICE PROCEDURALS RESPECTED BY LAW ENFORCEMENT&trade;.

And don't forget to sign up for her newsletter for up-to-date information on release and special offers at http://carolynarnold.net/newsletters.
Posted by Elisha German at 5:40 PM