Off the Grid by Randy Denmon 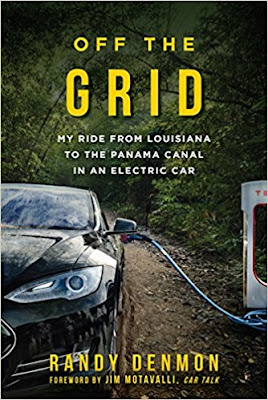 The rollicking tale of a first-of-its-kind adventure—driving a Tesla through Central America.

Only a week after the nation’s newspapers were filled with headlines of the first cross-country trip in an electric car, two Louisianans slip quietly across the Rio Grande in south Texas in an attempt to do the unthinkable—drive a factory electric car across seven Third World countries to the “end of the road,” Panama City, Panama.

Without support and armed only with a toolbox, a bag of electrical adapters, and their wits, author Randy Denmon and his friend Dean trudge on through jungles, deserts, volcanoes, rivers, and crater-sized potholes, all the while trying to avoid the drug cartels and corrupt border guards that could mean a quick end to their adventure . . . and their lives. Through it all, the same enormous problem loomed daily: how to charge the car in such a primitive and desolate setting?

Despite the numerous setbacks, Randy never lost his sense of humor. Off the Grid is as much a spiritual journey as a physical one about two guys who dropped everything for one grand twenty-first-century adventure—traveling back in time in a car that seemed to come from the future.


Excerpt from Off the Grid by Randy Denmon
How had I arrived here? Somehow, my life had gotten too boring, plain. It needed spice. Something more than just producing more goods and services than I consumed. What had happened to that young, adventurous, romantic young man who freely passed the days doing nothing, smiling, enjoying almost anything, even a trip to the grocery or just a beautiful spring day?
Surely, like many urban American men of my age, in the prime of their lives, I wasn’t starting to suffer from that awful disease—having such a vastly inflated opinion of one’s self-worth that my disappearance for just a few weeks would result in a national disaster or cause the Earth to stop spinning. Still, I needed something—adventure, freedom. Maybe this—especially if we succeeded—would appease my trampled, wandering spirit before I looked into the mirror and saw nothing but a nerdy, yuppie robot.
Somehow my life had been transformed into a daily grind of bland social outings and long hours at the office, all without zest. Now in my forties, I seemed to move through the world without meaning or direction. Nothing made the soul explode with anxi­ety or joy as it did in my youthful days, when optimism penetrated everything. I needed to get off the grid, away from the cell phones and emails. I needed some freedom. An overreaction? For sure it would be a hell of an undertaking, worthy of headlines.
Just a few days earlier, the national papers had been filled with stories of the first cross-country trip in an electric car, Los Ange­les to New York. That was peanuts compared to what we were attempting. A few electric vehicle (EV) enthusiasts had plans to drive to Alaska, and message boards across the country were filled with threads discussing how to drive an electric car across rural Wyoming or Texas. But nobody had yet attempted anything this bold. Even if we failed, just trying would soothe my psyche. We had the balls to try if nothing else. 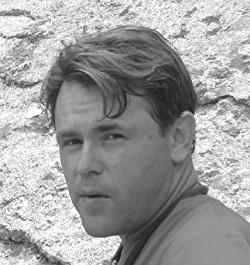 Randy Denmon is a US Army veteran of the Gulf War.  He is also a partner in Denmon Engineering Inc. in Monroe, Louisiana.

Randy’s first book, The Lawless Frontier, published by Kensington, was selected as a finalist for the Western Writers of America Spur Award and the Foreword Magazine Book of the Year Awards.

Denmon is a member of the Western Writers of America and the Writers League of Texas.  Prior to publication, his first book was a finalist for the annual National Writers Association’s unpublished novel contest and the Panhandle Professional Writer’s novel contest.