#Giveawa Off Season: A Novel of Healing by E.S. Ruete 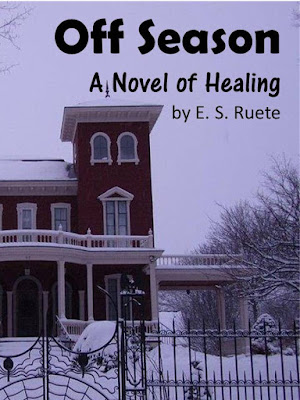 Dottie woke up wondering where she was and why she was so cold. The first thing she noticed was that she must be outside – she was lying on cold ground and snow was hitting her in unusual places. That’s when she noticed the second thing. Her skirt was pulled up past her waist and her panties were gone. Damn those bastards. It started to come back to her.

Dottie is now on an odyssey; a journey not of her choosing; a journey of healing, integration, and reconciliation that will involve her partner, her friends, her enemies, her church, her whole community. And her rapists. As she fights her way through social stereotypes about rape and rape victims, she also finds the strength to overcome society’s messages of who she should be and lays claim her true self. But the memories, the loss, the anger – and the fears – never go away. No woman chooses to be raped. I asked Dottie why she chose to tell me a story of rape. She said that millions of women, hundreds every day, have stories of rape that never get told. She told her story because she could. Because she had to. Because maybe people would hear in a work of fiction a Truth that they could not hear in any other way.

(The font of the following excerpt is to indicate that the character is having a flashback.)

"Now Sheri, we don't use that language here."

"The hell we don't. 'Bullshit' is a lot less dangerous than the language you're using. Telling me that it was my fault, that I wanted it, that I probably enjoyed it. You weren't there. You didn't have some … jock sitting on your belly holding your nose while he poured liquor down your throat. … You didn't get raped. And raped and raped and raped. "

"Recovery, hell...The girl was raped. Rape is not an issue. It’s not an obsession or compulsion or neurosis you recover from. It’s not an addiction that you are in recovery from. It’s not something you own, it’s something that owns you. It’s a violation. It’s a big gaping wound. If you’re lucky you survive it and it heals over, but it leaves a scar that is always there. You don’t recover from it. You don’t even get to the place where you say you’re in recovery. You just is. ‘Raped’ is a part of you the rest of your life. But you wouldn’t know about that, you tight-assed little white male f…”

Now retired, Ned lives in Niantic, Connecticut with his second wife. He continues to offer pro bono group facilitation and facilitation training to schools, churches, community groups and not-for-profit organizations. He has led strategic planning retreats for United Action Connecticut (UACT), Fiddleheads Food Co-op, and ReNew London. He is actively involved in LGBTQIPA+ advocacy and annually attends and presents sessions at the True Colors Conference. He is a member of the International Association of Facilitators (IAF) formerly served on the Association Coordinating Team (ACT, the IAF Board of Directors). He was associate editor of Group Facilitation: A Research and Applications Journal and has contributed articles to Group Facilitation, The Facilitator, and other publications on group facilitation and management consulting.

One randomly chosen winner via rafflecopter will win a $50 Amazon/BN.com gift card.