I was on yahoo news doing my daily news read and I came across this: 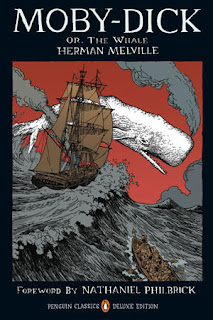 If you're familiar with Herman Melville's classic, "Moby-Dick," you know that the title character -- an enormous white whale -- destroyed a whaling ship commanded by Captain Ahab. That set the obsessive Ahab off on his fabled quest to wreak revenge on the creature that upended his life.
And now it appears that a much-later group of maritime adventurers have uncovered the real-life vessel that served as Melville's inspiration for Ahab's quest. Melville modeled the character of Ahab on one Captain George Pollard, and researchers have found what they believe is the wreckage of the ship Pollard commanded two years after a whale felled his first whaling ship. But Pollard's second ship ran afoul of the weather instead of an enormous symbol of nature's impersonal tampering with human fate (as was the case with Ahab's famed craft, The Pequod). During a night storm some 600 miles off the coast of Hawaii, Pollard's ship --The Two Brothers -- struck a coral reef, capsized and sank.
As the AP's Audrey McAvoy reports, Marine archaeologists who'd been scouring an area 600 miles northwest of Honolulu appear to have uncovered the wreckage of the Two Brothers, which went under in 1823. McAvoy says that the elements have eroded away much of the structure of the vessel -- but "researchers found several harpoons, a hook used to strip whales of their blubber, and try pots or large cauldrons whalers used to turn whale blubber into oil."
In an announcement released today, the Papahanaumokuakea Marine National Monument--which bills itself as "the single largest conservation area under the U.S. flag"--said that the find of "nationally significant wreckage" is "the first discovery of a wrecked whaling ship from Nantucket, Massachusetts."
"For the past 188 years, the wreckage of Two Brothers has been lost on the ocean floor," the group's announcement explained. "The vessel was part of a fleet of several hundred whaling ships that were part of America's economic and political expansion into the Pacific, transforming the region, including Hawaii, both economically and culturally, and resulting in the near extinction of many whale species. The whaling fleets were also greatly responsible for early explorations of the Indian Ocean and the Polar regions."
Melville's novel has been an obsession of history and literature geeks alike for generations. Meg Guroff, a magazine editor and one of the internet's preeminent "Moby-Dick" authorities, maintains a website -- Power Moby Dick -- which features a transcribed and fully annotated version of the entire novel. Guroff told The Lookout that she found news of the apparent discovery of The Two Brothers "amazing."
"This story surprised me in so many ways. There's only one existing wooden whale ship in Mystic, Connecticut, but I didn't know that they hadn't discovered any wrecked wooden whale ship from Nantucket before now," Guroff told us. The whaling industry "was a major economic force of the 19th century that's kind of just vanished."
Guroff added that the find actually makes "Moby-Dick" seem more real: "The most amazing discovery would be the Essex itself"--that would be Pollard's first, whale-ravaged ship. "But to have this ship, the one that Captain Pollard sank after he survived this ordeal ... just kind of crosses the boundary between story and reality."
According to historians, Pollard and members of his crew were adrift in the Pacific for three months after the Essex sank. As later accounts made clear, the ordeal was harrowing, with survivors staving off starvation and mental anguish, and resorting to cannibalism in order to survive. In fact, Pollard was forced to eat his own cousin in the waning days of the shipwreck's aftermath. It's no wonder that he may well have held a grudge against the whale that sank his ship. Nevertheless, Pollard, unlike Ahab, did not surrender his life to the pursuit of whales: After he survived the sinking of the Two Brothers, Pollard retired from the whaling business.
Here is the link to the actual site
I haven't read this book yet (I know....shameful) but I do plan on reading it this year or the next. I would like to read it with my daughter so it will definitely be this year or the next.
Have you ever read this book? What did you think of it?
Posted by Elisha German at 12:41 PM