**Giveaway** Trying it All by Christi Barth **Author Q&A**

Riley’s brain tells him she’s a ticking time bomb—
but
his body doesn’t want to play by the rules. 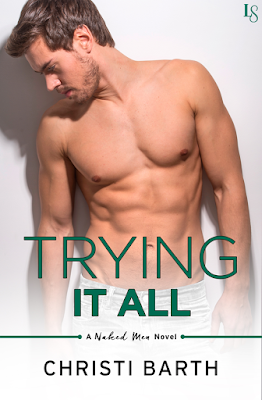 Order.
Attention to detail. Never leaving anything to chance. These are the qualities
that make Riley Ness such a terrific federal agent . . . and a pain in the ass
to everyone else. The only time Riley lets loose is when he’s hanging out with
his closest pals. So when he’s thrown together with gorgeous, flighty Summer
Sheridan, Riley’s brain tells him she’s a ticking time bomb—but his body
doesn’t want to play by the rules.

Riley has
to be the most irritating man Summer has ever met. The brooding hunk thinks he
needs to teach her a few lessons about real life, while she’d rather show him
how to enjoy it. But her BFF’s all but engaged to Riley’s best friend, and
besides, their intense physical chemistry is all too real. Summer just needs
Riley to try to meet her halfway and take a chance with the one thing that
matters: his heart.


Excerpt
“Living forever’s only fun if you truly live.”
That jab stung. Because it was the same riff the guys threw at him, over and over again. “I live. I just follow the rules. Obey the speed limit. Turn off my phone before the plane starts to taxi.”
Summer tossed her cloud of hair back. Gave him a knowing look. No, a knowing smirk. “Oh, I get it now.”
“What?”
“You’re not uptight. You’re chicken.”
The woman had crossed a line. He’d gone through wilderness training and survival training. He’d climbed Mount Kilimanjaro. Become a black belt in Tae Kwon Do. He’d pushed himself to physical and mental limits most men wouldn’t be able to attain. Being sensible? In no fucking way was it comparable to being scared.
Riley’s long strides ate up the distance between them. Furious, he spat out, “You want me to try something risky?”
“Yes. Just once. But I don’t think you’ve got the balls,” she taunted.
Riley grabbed her face with both hands. Her lips parted in surprise. And he swooped right onto them.
Her lips were soft. So soft and pliable it almost deterred him. But then . . . they were so soft and pliable that he couldn’t possibly stop. Instead of holding her still, his hands curved to cup the back of her head, his thumbs caressing those impossibly high cheekbones that gave her the look of someone made to walk a runway.
Riley nipped at her wide bottom lip. Soothed it with a stroke of his tongue that savored the sweet, lingering tang of the orange cream cheese icing on the cinnamon rolls from brunch. He wanted to keep going. To nip and bite and lick down her neck, over the side of the breasts she flashed at him all day. To gobble down her sweetness and spice just like he had those rolls.
Her moan refocused him. This wasn’t just following through on a dare anymore. This was a real kiss. A real moment of pure, physical pleasure. So he dropped his hands to the small of her back and hauled Summer tight against him.
Thanks to her ridiculous—and ridiculously sexy—high heels, everything lined up right. The notch between her thighs ground right against his dick behind the suddenly too-tight fly of his shorts. Breasts plumped against his chest. Breasts he was pretty sure he could fit entirely into his mouth . . . since he might have pictured them a time or ten since meeting her in the spring. Tight nipples insistently poked at his pecs.
The kiss kept going. Ry slipped his tongue in as she let out a kittenish purr. God, it was the sexiest sound he’d ever heard. The soft, tiny mewl fired through his blood. Fired him up. His tongue tangled with hers. Like they were two swords, fencing for the win. Because there would damn sure be a winner. The way they were grappling at each other? It wasn’t just fun. It was about proving something.
Her mouth—made for kissing. And more. His tongue slid deep. Felt her wetness. And Riley couldn’t help imagining how all that warm wetness would feel locked around another part of his body. Summer’s hands came up to fist in his shirt. Shit—for a second, he worried she’d push him away. But then those fists pulled him even closer. One smooth calf twined around his. He wanted to walk her back ten steps to the nearest tree and just sink into her.
Which was crazy. Riley didn’t even like this woman. He’d kissed her to save his pride. To defend his honor. To get her off his back. And now he wanted to put Summer on hers, spread her thighs, and—
That was it. Riley let go. Let go of the sweet ass he didn’t even remember moving down to squeeze. Let go of those luscious lips. Yanked his head back and deliberately stepped out of the semicircle of her curved leg.
“You and I both know that was the riskiest damn thing I could possibly do today.” Riley looked at her still unfocused eyes, her kiss-swollen lips. Proof that she’d enjoyed it every bit as much as he had. “Oh, and you also know now that I’ve got the balls. I’ve got the whole package.”

USA Today bestselling author Christi Barth earned
a Masters degree in vocal performance and embarked upon a career on the stage.
A love of romance then drew her to wedding planning. Ultimately she succumbed
to her lifelong love of books and now writes award-winning contemporary
romance, including the Naked Men and Aisle Bound series.

Christi can always be found either whipping up gourmet meals (for fun, honest!)
or with her nose in a book. She lives in Maryland with the best husband in the
world. 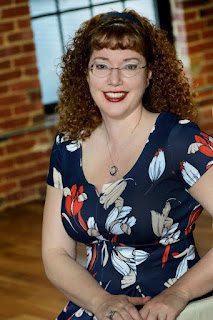 USA Today bestselling author Christi Barth earned
a Masters degree in vocal performance and embarked upon a career on the stage.
A love of romance then drew her to wedding planning. Ultimately she succumbed
to her lifelong love of books and now writes award-winning contemporary
romance, including the Naked Men and Aisle Bound series.

Christi can always be found either whipping up gourmet meals (for fun, honest!)
or with her nose in a book. She lives in Maryland with the best husband in the
world.

a Rafflecopter giveaway
Posted by Elisha German at 8:00 AM