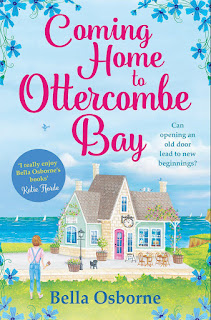 Daisy Wickens has returned to Ottercombe Bay, the picturesque Devon town where her mother died when she was a girl. She plans to leave as soon as her great uncle’s funeral is over, but Great Uncle Reg had other ideas. He’s left Daisy a significant inheritance – an old building in a state of disrepair, which could offer exciting possibilities, but to get it she must stay in Ottercombe Bay for twelve whole months.
With the help of a cast of quirky locals, a few gin cocktails and a black pug with plenty of attitude, Daisy might just turn this into something special. But can she ever hope to be happy among the ghosts of her past?
Excerpt:


No, sorry. I need to leave straight after the funeral.’ Daisy broke eye contact and picked up the delicate teacup. She didn’t know where she was heading next. She had been staying in a hostel in Canterbury, hopping from one job to the next, when Aunt Coral had telephoned. It had seemed like an ideal opportunity to make it a permanent departure from Kent. As to where she was going next, she had no idea, but she wouldn’t be staying in the small Devon town any longer than was absolutely necessary.


‘Well, you can’t leave directly after the funeral, I’m afraid, because there’s the will and—’
A knock at the door was simultaneously accompanied by frantic barking from the garden making Daisy feel she was under attack from two different directions. Aunt Coral calmly got up and headed for the front door. As soon as Daisy heard the high-pitched voice a bell started to ring in the deepest recesses of her mind.
The visitor’s Devonshire accent was strong and her voice got louder and faster as she approached. ‘OhMyGod. I can’t believe it’s actually you. I mean I hoped it was when I saw the bike because I don’t know anyone with a bike like that. Not round here. And it is you, you’re here!’ A young woman with long straight dark hair flung herself at Daisy and hugged her tightly. ‘I’ve missed you so much,’ she said, sitting down without taking her eyes off Daisy, which was quite disconcerting.
‘Tamsyn,’ said Daisy, recognising her. ‘It’s lovely to see you. Do you still live next door?’
‘Yeah, with Mum and Dad. They’ll be thrilled to see you too.’
‘Tamsyn has been a wonderful help keeping an eye on Reg while I’ve been at work. Reg has kept every card or letter you have ever sent from all your travels and I think he’s read them all to Tamsyn a few times over. And you know how he always liked to tell stories and you featured in quite a few of those too.’
‘Not the fantasy ones with dwarves. You weren’t in those,’ said Tamsyn, her face deadpan.
Daisy wasn’t sure how to respond, but thankfully Aunt Coral started speaking again. ‘I don’t know what I’d have done without Tamsyn these last few months. She’s virtually one of the family now. Aren’t you, Tamsyn?’
‘OhMyGod. Does that make us sisters?’ said Tamsyn, jigging about excitedly in her chair – the same action being mirrored at the back door by the dog.
‘I don’t think so,’ said Daisy with a chuckle. Tamsyn was joking, wasn’t she? Here was a prime example why people should leave home and explore the world, thought Daisy. Staying here had turned Tamsyn into Ottercombe Bay’s answer to Phoebe Buffay from Friends, blurring the line between adorable and certifiable.


And thank you for having me on your blog!

Where do you get your ideas?
They are popping up all the time. It’s a bit like Whack a Mole inside my brain! I think everything and nothing can be a trigger for an idea. They usually start small and grow. It can be a conversation I overhear, a person I see or something in the news – there’s no way of knowing where the next one will come from but I am very grateful when they do!
What is your writing process like?
I’m a planner by nature so I’m very structured with my writing. I develop the idea in my head and jot notes and put them in a folder. When I feel ready I sketch out character profiles which I build on and I map out the plot in detail. Only then can I start to write the first draft.
What advice do you have for writers?
Find other writers. They are the only people who truly understand the voices in your head. It is a great support and they’ll give you the kick up the bum you sometimes need too. Also get the book written. You can’t edit a blank page.
What is the first book that made you cry?
The One Hundred and One Dalmatians it was my favourite book as a child and probably because it touched me emotionally.
Do you find it easier to write character and dialogue for the opposite sex because you are the opposite sex? (A woman writing a man’s part and dialogue for example).
I generally find dialogue okay whoever’s perspective it’s from. I spend a lot of time observing speech – for this read she earwigs in coffee shops a lot.
What is your writing Kryptonite?
Anything to do with numbers. Like keeping track of what I spend on my writing and stationery habit. I’m rubbish at it.

Have you ever gotten reader’s block?
Hmmm, I didn’t even know this was a thing. I have a teetering TBR pile so I hope I don’t get it anytime soon.
How did publishing your first book change your process of writing, if at all?
I no longer have the luxury of having as long as I want to write or edit. I think I know a bit more about the publishing process and hopefully I’ve improved as a writer. Otherwise it’s not changed much.
What kind of research do you do, and how long do you spend researching before beginning a book?
It depends on the book. I do some research at the beginning until I feel I know enough to begin and then I’ll do more detailed research as I go along and at the end. I also get my friendly experts to check chunks of the text for any howlers.

Bella has been jotting down stories as far back as she can remember but decided that 2013 would be the year that she finished a full length novel. She’s now written four romantic comedies and been shortlisted twice for the RNA Contemporary Romantic Novel of the Year.
Bella's stories are about friendship, love and coping with what life throws at you.
She lives in The Midlands, UK with her husband, daughter and a cat who thinks she’s dog. When not writing she’s usually eating custard creams and planning holidays. 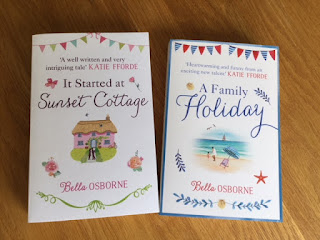 *Terms and Conditions –Worldwide entries welcome.  Please enter using the Rafflecopter box below.  The winner will be selected at random via Rafflecopter from all valid entries and will be notified by Twitter and/or email. If no response is received within 7 days then I reserve the right to select an alternative winner. Open to all entrants aged 18 or over.  Any personal data given as part ofthe competition entry is used for this purpose only and will not be shared with third parties, with the exception of the winners’ information. This will passed to the giveaway organiser and used only for fulfilment of the prize, after which time I will delete the data.  I am not responsible for despatch or delivery of the prize.