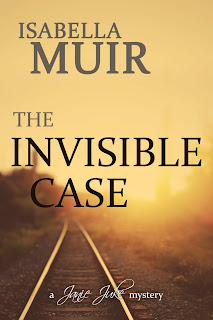 A shocking death turns a homecoming into a nightmare.

It's Easter 1970 in the seaside town of Tamarisk Bay, and for one family the first Easter of a new decade brings a shocking tragedy. Amateur sleuth and professional librarian, Janie Juke, is settling into motherhood and looking forward to spending time with her family. When her Aunt Jessica is due back from Rome after nine years travelling around Europe, she arrives back in town with a new Italian friend, Luigi, and the whole family soon get embroiled in a tangle of mystery and suspicion, with death and passion at the heart of the story.

As time runs out on Luigi as prime suspect for murder, Janie has to use all of her powers of deduction in the footsteps of her hero, Hercule Poirot, to uncover the facts. Why did Luigi come to Tamarisk Bay? What is the truth about his family?
As Luigi's story unfolds, tragedy seems to haunt the past, present and unless Janie acts fast, possibly what is yet to come.


Delving into the past
When I first conjured up Janie Juke I knew that her story had to be set in the 1960s.  It’s an era I have always loved.  My older brother and sister both grew up during the sixties, so I’m lucky to have first-hand memories of all kinds of wild events.  My sister was at the Rolling Stones concert on Hastings Pier in 1964 when tickets probably cost a few shillings.  My brother was a real mod, with a scooter, and the ‘mod’ uniform of a Parka jacket, with fur-lined hood.  He didn’t take part in the crazy event in 1964, when 5,000 mods and rockers planned to storm Hastings sea front to create the ‘Second Battle of Hastings’ and the police had to fly in extra officers to control the crowds, but he may well have inevitably watched from the sidelines.
I remember sitting gazing at my sister when she put on her makeup before a night out.  She aimed for that ‘bare-faced’ sixties look with just a touch of face powder.  All the focus was on the eyes, with white or sometimes bright blue eyeshadow and thick black mascara and eye-liner, trying to emulate the sixties model Twiggy.  She would spend hours back-combing her hair into a bouffant style and then use oceans of hair spray to keep it just perfect.
When we first meet Janie in The Tapestry Bag it’s 1969.  Twiggy is still very much on the scene, but hairstyles are starting to change from that manicured look, to Janie’s more casual style of long, loose hair, pulled back with a headband made from ribbons or scarves.  Mary Quant brought hot pants, mini skirts and plastic macs to the fashion scene, which would have soon travelled down from the King’s Road, Chelsea into boutiques in and around the imaginary Sussex seaside resort of Tamarisk Bay.
It wasn’t just fashion and music I researched for the Janie Juke novels.  In the second and third books in the series Janie looks back to the Second World War in an attempt to solve the mysteries.
In Lost Property,  Hugh Furness, one of Janie’s library customers enlists her help.  Hugh was an RAF pilot in the Second World War.  He was stationed at ‘Longmere’ an RAF base modelled on RAF Tangmere, a place close to where I live.  Some of the pilots based at Tangmere were involved with the Special Operations Executive, flying brave souls into France to help the French resistance.  Tangmere is now a Military Aviation Museum and I was grateful for the advice and feedback from one of the museum’s Trustees to ensure all the details were accurate.
Italy and Italians feature in the latest book in the series, The Invisible Case.  In particular Anzio, a favoured seaside resort for Italian holidaymakers, about an hour from Rome, a place I have visited many times.  Anzio is the present-day home town of Luigi, but also the location for a key part of the plot, when we return to the war-torn Anzio of 1944.  I am half Italian, so was able to enlist the help of my Italian cousins when researching day-to-day life in wartime Italy.  For me the wonderful aroma of Italian coffee is synonymous with all the marvellous family holidays I had in Rome, but during the wartime real coffee was rarely found.  I fleshed out these first-hand memories with plenty of online searching, as well as reading books about Italy during the war.
In the opening chapters of The Invisible Case we meet Janie’s Aunt Jessica travelling from Rome to return to her home town of Tamarisk Bay, after nine years exploring Europe.  As I wrote the opening scenes I was there with Jessica on that long train journey from Rome, which was a trip I did many times with my family.  Again, first-hand memories helped me to picture the scene, with all the smells, sights and sounds of Roma Termini – Rome’s central train station.
It’s been great fun delving into the past and I’m looking forward to doing more of the same as I start to map out the next book in the Sussex Crime mystery series, when Libby Frobisher – Janie’s young journalist friend - takes the lead in the investigation.  Libby is chic, stylish and fun and ever keen for that exclusive that will make her name and give her a chance to head for the bright lights of Fleet Street!
Keep in touch with progress by visiting my website: www.isabellamuir.com or by following me on Twitter @SussexMysteries or visit my Facebook page at: https://www.facebook.com/IsabellaMuirAuthor/ 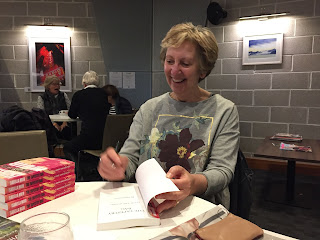 Isabella Muir is the author of Janie Juke series of crime mysteries - all set in Sussex.

'The Tapestry Bag' is the first in the series, followed by ‘Lost Property’. Now - 'The Invisible Case' - the latest in the series is available for pre-order from Amazon.

The 'Janie Juke mysteries' are set in Sussex in the sixties and seventies and feature a young librarian with a passion for Agatha Christie. All that Janie has learned from her hero, Hercule Poirot, she is able to put into action as she sets off to solve a series of crimes and mysteries.

She has been surrounded by books her whole life and – after working for twenty years as a technical editor and having successfully completed her MA in Professional Writing - she was inspired to focus on fiction writing.
Aside from books, Isabella has a love of all things caravan-like. She has spent many winters caravanning in Europe and now, together with her husband, she runs a small caravan site in Sussex. They are ably assisted by their much-loved Scottie, Hamish.

Giveaway – Win a signed copy of The Invisible Case (Open Internationally)
*Terms and Conditions –Worldwide entries welcome.  Please enter using the Rafflecopter box below.  The winner will be selected at random via Rafflecopter from all valid entries and will be notified by Twitter and/or email. If no response is received within 7 days then I reserve the right to select an alternative winner. Open to all entrants aged 18 or over.  Any personal data given as part of the competition entry is used for this purpose only and will not be shared with third parties, with the exception of the winners’ information. This will passed to the giveaway organiser and used only for fulfilment of the prize, after which time I will delete the data.  I am not responsible for despatch or delivery of the prize.
a Rafflecopter giveaway
Posted by Elisha German at 2:10 AM