Everything is not as it seems...Elizabeth's fiancé cheats on her, a studio head and director are hell bent on making her life miserable and it gets harder to keep her secrets protected.

The only good thing in her life is Billy, their budding romance, and connections that give them freedom to do whatever they want in Hollywood.

Will their connections be enough to keep their secrets hidden and Celebrity Status safe or are they doomed to be torn down?


Thank you for having me here today!
Now that summer is upon us I am thinking about what books to read when lying beside the pool in the hot sun.
I could get some new books or I could go with a few of my favorites and re-read them as I love them. What to do? What to do? J
Are you wondering what my favorites are? Okay, let me tell you what they are and then we can decide together if I should re-read them or go with something new J

#1 on the list is Can you keep a secret? by Sophie Kinsella. Oh my this is one of the funniest books I’ve ever read.
I guarantee this book is hysterical and the part about her co-worker’s plant … I laughed so hard I cried. Hmmmm I may have to re-read this one. 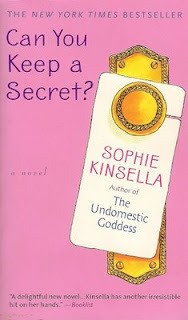 From back of the book:
Meet Emma Corrigan, a young woman with a huge heart, an irrepressible spirit, and a few little secrets: Secrets from her boyfriend: I've always thought Connor looks a bit like Ken. As in Barbie and Ken. Secrets from her mother: I lost my virginity in the spare bedroom with Danny Nussbaum while Mum and Dad were downstairs watching Ben-Hur. Secrets she wouldn't share with anyone in the world: I have no idea what NATO stands for. Or even what it is. Until she spills them all to a handsome stranger on a plane. At least, she thought he was a stranger.…Until Emma comes face-to-face with Jack Harper, the company's elusive CEO, a man who knows every single humiliating detail about her...
***
#2 Next up is Enchanted Inc. by Shanna Swendson
This is such a cute story. It has everything from magic, fairies, toads and romance. I love the premise of this story and the humor contained in it J
It’s the first in a series but by far the best one. I loved this book. I may have to re-read this again J 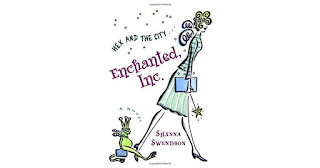 Back of the book:

Katie Chandler had always heard that New York is a weird and wonderful place, but this small-town Texas gal had no idea how weird until she moved there. Everywhere she goes, she sees something worth gawking at and Katie is afraid she’s a little too normal to make a splash in the big city. Working for an ogre of a boss doesn’t help.

Then, seemingly out of the blue, Katie gets a job offer from Magic, Spells, and Illusions, Inc., a company that tricks of the trade to the magic community. For MSI, Katie’s ordinariness is an asset. Lacking any bit of magic, she can easily spot a fake spell, catch hidden clauses in competitor’s contracts, and detect magically disguised intruders. Suddenly, average Katie is very special indeed.

She quickly learns that office politics are even more complicated when your new boss is a real ogre, and you have a crush on the sexy, shy, ultra-powerful head of the R&D department, who is so busy fighting an evil competitor threatening to sell black magic on the street that he seems barely to notice Katie. Now it’s up to Katie to pull off the impossible: save the world and–hopefully–live happily ever after.
***
#3 is Girl’s Guide to Witchcraft by Mindy Klasky
This book was hysterical. It’s about a girl who comes across a powerful magic book and ends up having to learn about witchcraft from her new cat. The cat is an incredibly funny character! This is definitely one of my favorites as it has all the pieces of a great summer read: witchcraft, characters to laugh with and a handsome wizard! 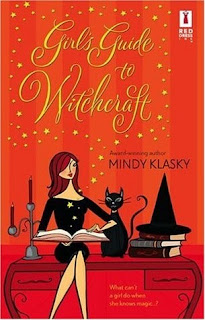 Back of the book:
Which is more unlikely? Meeting a single, straight, reasonably attractive, willing-to-commit man? Or discovering a secret cache of magic books?
For good girl Jane Madison, neither has a shot in hell of coming true--until the day she finds a hidden room....Now she's done a bit of experimenting and found a spell that makes her irresistible to men--even those who have previously ignored her. And another that turns a cat into her witch's familiar (a snarky, critical, self-absorbed man--pretty much a typical male).
Though her impulsive acts of magic have brought a warder (sexy, grouchy, elusive and determined to stop her from using magic) down on her, Jane's not willing to let go of this fantastic new life.
Though she wonders about having things that aren't "real," she's having too much fun to stop. After all, no one ever said being a witch was easy....
***
There you have it three great summer reads! I do believe I will re-read these this summer! All are perfect for those lazy summer days!
***
Angela Scavone is the author of two Soulmate novels, Love by the book and A Journey Home. Her Latest novel Celebrity Status is now available from Pearman Literary Publishers on Amazon. 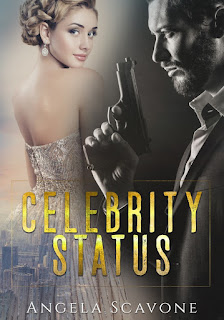 Famous Hollywood actress, Elizabeth Stanfield, has a glamorous lifestyle with a lavish house, glittery parties, a people magazine's fifty most beautiful people fiance and best friend Billy Stone - Famous actor, producer and secret organized crime enforcer.
Everything is not as it seems...Elizabeth's fiance cheats on her, a studio head and director are hell bent on making her life miserable and it gets harder to keep her secrets protected.
The only good thing in her life is Billy, their budding romance, and connections that give them freedom to do whatever they want in Hollywood. Will their connections be enough to keep their secrets hidden and Celebrity Status safe or are they doomed to be torn down?
Buy now on Amazon: Celebrity Status
Find Angela at any of her social media places (she’s usually lurking around somewhere J)
angelascavone.com | Facebook | Twitter | Goodreads  | Pinterest |


I had my driver take me back to the hotel. I went straight to the restaurant inside the lobby and ordered spaghetti with meatballs.
“Where’s your boyfriend?” Sonny asked as he sat down next to me.
“Miami.”
“Not that boyfriend,” Benny Micheletti said as he sat on the other side of me.
“Billy is at a meeting, what do you two want?” I asked, in a snarky tone. I was exhausted from the tension on the set and all I wanted to do was wait for my meal in silence.
“We need to speak to Billy and thought you would know where he is,” Sonny said.
“Like you talked to him the night before the hit on Trassari?”
Both men stared at me without saying a word.
“Leave him out of shit like that,” I demanded.
“Mind your own business,” Sonny threatened.
The waitress came over with my meal. I ignored Sonny’s threat and dove into my meal.
“Is there anything else I can help you guys with?” I asked. “If not, I’d like to eat in peace.”
“Hard day on set?” Benny asked as he went to take a meatball off my plate of spaghetti.
I smacked him hard on the hand with my fork.
“Ow,” he yelled.
“All those meatballs are spoken for, get your own, and yes every day is a hard day on set with Antonio Suarez.”
“Need us to take care of anything?” Sonny asked, becoming serious.
“No, but thank you for the offer.” I sarcastically answered.
“Well isn’t this rich.” Elena materialized at the table. “I came to drag you back to the set and here you are with your friends.” She practically spit out the word friends.
“Who is this stunning vision of beauty?” Sonny stood up from the table, taking Elena’s hand in his and kissing it.
I gagged on a mouthful of food.
“I’m the studio head in charge of the film Elizabeth is supposed to be working on right now.” She blushed as he kissed her hand again.
“Well, Bella, you are quite the sight,” Sonny continued to fawn. “But I’ve never heard of a studio head on set.”
“Unfortunately, the director is having a hell of a time with his lead actress.” She glared at me. “So, I have to stick around and babysit.”
“Do you mean Elizabeth?” Sonny asked, as if he was truly concerned.
“Yes, Elizabeth and the director, Antonio, don’t get along.” Elena answered, in a softer tone, no doubt falling for Sonny’s charm.
“Perhaps, Bella, then you need a new director because Elizabeth here is the best in the business.”
Elena ripped her hand out of his grip as I gave her a smug smile with a mouthful of food.
“Yeah, Elena, why don’t we get a new director?” I asked sarcastically.
“My brother Benny and I could help with that if you want?” Sonny propositioned Elena.
She blanched at his words.
“Sonny,” I blurted out. “Seriously?” I couldn’t believe he had offered his services.
“The offer is on the table. Let’s go, Benny.”
“Sorry about that, they’re idiots,” I apologized to Elena after the two men had left.
“Yet you were having lunch with that sort of people. I should’ve known.”
I glared at her in response.
“I expect you back on the set in thirty minutes,” she demanded as she haughtily turned and walked out of the restaurant.

Angela Scavone is the author of two Soulmate novels, Love by the book and A Journey Home. As well as,  a contributing author to the Christmas anthology, ‘A Soulmate for Christmas’. Her latest novel Celebrity Status is now available from Pearman Literary Publishers on Amazon. She lives in Ontario, Canada sharing her home with her father and much-loved trio of pups. Apart from her avid love of story telling, she likes to read, spend time with family and friends and concoct dairy free recipes from scratch. Sometimes she wins and sometimes she loses – tofu, banana and peanut butter pudding we are looking at you