Life in Death by Harlow Coban REVIEW and Giveaway! 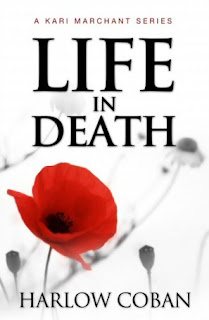 Let me start off by saying I didn't like the cover. It didn't do the story justice. The story was well written with well developed charachter. Harlow Coban keeps you thinking on your toes wondering what in the world is going on. What may be a small mistake by a coworker may have hindered the chances of survival for the troubled Patience Dolo; a foster child who is supposed to be cared for by Andrea and Scott Frost. When the two detectives show up and tell Andrea that Patience has been found dead, she isn't reacting or taken by the news as typical parents are. In fact, she is  appearing to be putting on an entire act for the two detectives. What I found odd is the fact that Andrea didn't ask questions about Patience or if she could go see her...nothing. She seemed on the defensive. Ansty. Nervous.
And even though I feel bad for April, I don't care for her. She is loose, doesn't dress appropriately for her job, or any job for that matter. She is nosy and rude.  She seems to try too hard to be the IT girl.
There were parts of this book that were a little challenging for me to read; only because I don't do the blood and gore. Though I still have a hard time watching Jurrasic Park. Yes, I can be that sensetive; not by choice. Harlow Coban had great detail and it wasn't over done; I personally just didn't like it when it came to Saura and Edvard (their alto egos) and their long time ago ceremony, I had a twinge of oh yuck. But probably for most everyone else, this wont be a huge issue, espeically if you watch any of those crime shows.
I liked Kari Marchant, Pateience's social worker. She is someone I could see myself being friends with. Having a great cup of coffee and great conversation. I felt bad for her though, not only because she had to turn in her friend/coworker because she forgot to give her the note about Pateince running away, but because she was with a man who had incriminating evidence on his computer and she threw him out because of it. He threatened that if she told that she would "regret it". She found out he was running for office and sent him a letter; but then he is missing then found dead with her letter on him. Making her look very guilty.
I really enjoyed the fact that even though this story had  a few underlying stories, they akk tied into one and it wasn't hard to follow. I also enjoyed the fact that even though this story is only about 60 pages long, Coban doesn't race through it. She kept good suspense, making you read on to find out what is going to happen next.
I have been luckjy enough be read yet another good book by a really good writer. Again, I can honestly say I do look forward to her next book. I do recommend this book; but I also advise parental discression, becasue there is a little colorful language and some adult content.
I received this book for review from CBLS.
As I stated in my title, there is a giveaway! The winner will recieve a copy of this great read in e-format. Fpr a chance to win this book, leave a comment here telling me you want to enter. That's easy, right? And for an extra point each, follow my blog as well as on twitter. Let me know in your comment that you are a new follower of mine on twitter and/or here and if you already are following me then let me know:) Good luck all and happy reading!
﻿
Posted by Elisha German at 12:03 AM

I enjoyed your review. Sounds like an interesting book. Please enter me in the giveaway. Thanks.

This sounds like an interesting book. I don't mind a bit of gore. I don't read horror as much as I used to, but I still enjoy it.

Thanks for the chance to win.

This book sounds intriguing! Thank you for entering me. I do follow your blog:)

Thank you for posting this review - I thoroughly enjoyed it!

Could you please cross post on goodreads and amazon if you haven't had a chance to already?

Hope you have a gr8 weekend :D