US of Books Tour - The Wapshot Chronicle by John Cheever - **REVIEW** 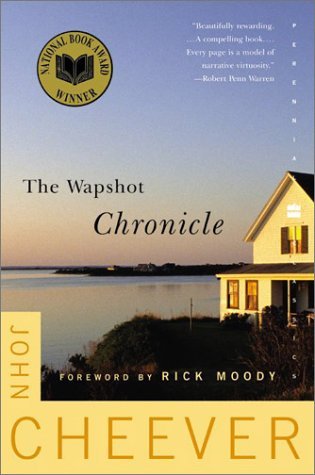 US of Books Tour hosted by:
Laura at 125pages.com

Based in part on Cheever’s adolescence in New England, the novel follows the destinies of the impecunious and wildly eccentric Wapshots of St. Botolphs, a quintessential Massachusetts fishing village. Here are the stories of Captain Leander Wapshot, venerable sea dog and would-be suicide; of his licentious older son, Moses; and of Moses’ adoring and errant younger brother, Coverly. Tragic and funny, ribald and splendidly picaresque, The Wapshot Chronicle is a family narrative in the tradition of Trollope, Dickens, and Henry James.
Review:
I was hesitant to read this book even though the author is obviously talented, because the title threw me for a loop. However, the author proves himself to be quite the eloquent and talented writer.  You can tell the timeframe of this book by not only the syntax but by how and why Cheever framed the story.
There were themes within this book that were very relatable to any family in this story. Even in today’s modern and fast paced world, and I think that takes some talent when this story was not written for today’s world because our world today was only thought about futuristically.  I enjoyed the fact that Cheever gives the reader a chance to get to know the characters within the story without giving it all away and instead lets us read the characters and learn about them and what makes them an individual through our reading.
I was surprised to see quite a bit of lust and fantasizing in the story, but it wasn’t graphic. But I also found that perhaps lust was equated to love in this story. Because of this, whenever a person was fulfilled in their love, I found myself smiling. The older wealthy ladies on the other hand, Honora for example, I found a little irritating. Their way of thinking is almost the exact opposite of mine and because of this I would find it difficult and challenging to be around them on a daily basis.
I would recommend this story, not simply because it is a classic but, because the story between Captain Leander Wapshot and his sons as well as Lender’s diary, make this a very interesting read.