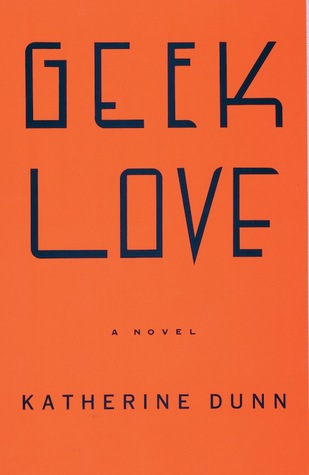 Entertainment Weekly chose Geek Love for Oregon. The magazine said, "A twisted couple populate their freak show with their own children in this modern classic. It's weird, carnivalesque, and unnerving: not unlike Portland on a given night. Need more? Kurt Cobain was a fan." 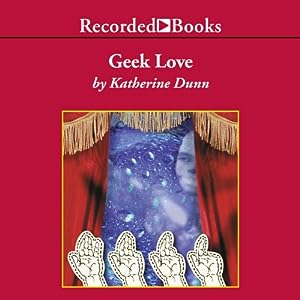 Geek Love by Katherine Dunn, narrated by Christina Moore, is a family saga of love, obsession, and revenge among the freaks at the Binewski traveling show. In many ways this novel reminded me of American Horror Story: Freak Show. Al and Lil populate the show with their own children, those they have disfigured by ensuring Lil drinks and subjects herself to all manner of poisons, insecticides, and other torturous devices. Their efforts to save the traveling carnival from bankruptcy requires more than traditional dwarfs and extraordinarily tall men and women. The Binewskis have concluded that the rise of basketball and other entertainments have made these traditional freak show
participants obsolete.
Much of this is narrated by Oly, an albino hunchback, as she recalls the past and her brother Arturo the Aquaboy, who became so consumed with jealousy, that he would do anything to be on top and take over the carnival from his father. Oly, despite being a hunchback, is on the outside of the clan, and she's treated more as a servant than a family member, even by the brother she loves beyond all reason. While her relatives seek to get by under Arturo's reign or escape it, Oly seeks to bind herself to him in the only way she knows.
Dunn's novel examines the love inside an family of freaks, but it really could apply to any family, especially if jealousies are allowed free reign and grow out of control. What's interesting is how much Oly is unlike her family in that she sees the "norms" as not something to be despised, but as something that could be loved. Her transformation and distance from her family is complete later on in the novel when she gives birth.
Christina Moore does an admirable job with the narration, and it is easy to follow each character. However, the setting in Oregon is not front-and-center and many times, readers will forget that the carnival is even in the state, particularly when other cities in other states are more frequently mentioned like Spokane. Geek Love by Katherine Dunn, narrated by Christina Moore, takes a while to get used to, and there is some very strong language and sexual content that some readers would not prefer. Overall, the novel was just plain odd.

Katherine Dunn is best known for her beloved novel "Geek Love," which was a finalist for the National Book Award in 1989. She is also the author of the novels "Attic" (1970) and "Truck" (1971). A fourth novel, entitled "The Cut Man," has been in-progress for decades and was purportedly scheduled for a September 2008 release.
Dunn is also known as a prolific sports journalist in the field of boxing, and has written several articles on the subject.