This post is part of a virtual book tour organized by Goddess Fish Promotions. Kayden will be awarding a $10 Amazon or B/N GC to a randomly drawn winner via rafflecopter during the tour. Click on the tour banner to see the other stops on the tour. 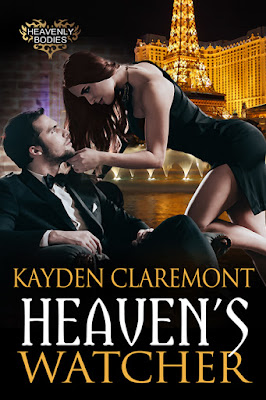 Leather-wearing, motorcycle riding PI Heaven Vaughan is working undercover in a Las Vegas casino for the DA. She must find the evidence to convict the casino boss of ordering her brother killed, but the tall, dark, sex-on-a-stick head of security is constantly watching her. Just knowing he’s got his monitors focused on her makes her hot, and she can’t help but make sure he has something as equally arousing to look at.

Straight-arrow Darius Turner has one job—to safeguard the people in the casino. The feisty redhead dominating his viewing pleasure is playing havoc with his duties and with his libido. All he wants is to take her up on her teasing invitations, but he can’t let her get too close. If Heaven discovers his true identity, there’ll be hell to pay.

Darrius stepped closer to Heaven. His scent of musk and hot male surrounded her as if for protection.

“Are you all right?”

No way would she believe Darius was concerned for her.

She raised her chin so she could meet the head of security’s eyes. “I’m fine.”

“I think you should come with me to the office.” Concern laced his words.

Heaven licked her dry lips. Because the behemoth noticed her, she now had to deal with him. “Said I’m fine.”

The corner of his mouth turned up into a generous smile. “Humor me.”

Some might consider him as handsome, but his seven-foot-tall frame and stern expression made him appear menacing.

Could the goliath be swayed with a smile?

She followed him toward the door leading to the private elevator. He slowed his gait until she walked beside him. As they approached the door, it opened. She knew he’d pressed the switch in his pocket.

He controlled everything in the building. He enjoyed being in charge. So did she.

In the elevator, he gazed at her as his scent permeated the small space, sending a pulsing electricity down her spine. She shifted her weight from her left foot to her right and back again, trying to ease the need building between her legs. Being so close to him suddenly caused the air to escape her lungs.

“You realize this isn’t necessary.”

She hopes you enjoy her other books, Hell’s Bounty, Timeless Passion, Red Hot and Tartan Temptation, all published by The Wild Rose Press.

Posted by Elisha German at 2:18 PM