#Giveaway The Making of Daisy Hart by Karen Tjebben


Cassie Bowmont had what it took to succeed, at least that’s what she told herself. Hoping a change of pace and new scenery would get her creative juices flowing, she rented a beach cottage in the small town of Avenel where she could dip her pen into the steamy depths of adult romance. She didn’t need or want any distractions to thwart her progress, but she hadn’t counted on Chris Walker. After deciding that he would be a great muse for the hero in her book, she realized that a summer fling with him was just what the Book Gods ordered.


When Chris Walker spotted the small car on the shoulder of the road, his hero complex kicked in. Unable to ignore a damsel in distress, he pulled over to be a knight in a Ford F-150. He stomped through the flooded road and convinced Cassie to follow him to safety. After a goodbye wave in the parking lot of a Piggly Wiggly, he figured he’d never see her again, but Fate had other plans. When their paths crossed once more, he paused long enough to notice the delight in her eyes, the playful smirk on her glossy lips, and the determination of her spirit. His heart stuttered. His brain flooded with need, and a crack penetrated the wall around his heart.


They knew the summer was all they’d have but falling for each other was inevitable. The pleasure of lust somehow transformed into the contentment of love. When a jilted lover returns and sabotages their relationship, they must decide if they will be prisoners to the past or sail into their future.


“Are you published?” Chris asked.
“Yes.” She nodded and added, “Self-published.”
“What genre?”
Pink heated her cheeks. She wasn’t about to tell him that she wrote romance and was considering erotica. She hadn’t decided yet. She read both, but she wasn’t sure she wanted to be an erotica writer. She wasn’t sure she had enough sexual experience or creativity to write a book that needed eight to ten sex scenes. She thought she could handle two or three at the most per book, which was what most of the romances she’d read had.
“I’m debating between writing contemporary romance or romantic suspense. You know, chick lit.” She did her best to make that sound boring and uninteresting.
“Chick lit,” he repeated. The corners of his mouth turned up. Was that code for mommy porn? His cock perked up at the news. What kind of naughty thoughts went through her mind? Damn, she was already hot, but that information made her down right volcanic. He’d have to get his hands on one of her books to check it out.
“You know, books you read at the beach, while waiting in line at the grocery store. Something with a Happily Ever After. Feel good books,” she added with a casual shrug. Then she cursed adding that last part.
His green eyes darkened with lust. Feel good books. He knew what that meant. Women all over America read books at night to ‘feel good’. Was she into that? Damn, his pants were getting tight in the crotch just thinking about the ways she could make him feel good.
She wanted to roll her eyes. Men were so predictable. They couldn’t help but think with their cocks. She should have known the man sitting across from her would be no different. He’d been a gentleman last night and had been polite so far, but the heat in his gaze betrayed the truth that his cock had taken over his brain once the conversation shifted to something that hinted at the notion of sexuality.
When would her bacon and eggs get here? She needed to finish this impromptu breakfast. She leaned closer to him and shook her head. “I don’t write about sex,” she stated matter-of-factly and a little annoyed.
It didn’t matter that she was going to write about sex. He didn’t need to know that was what she was considering. The way he looked at her suddenly made her feel dirty. Like she was some porn queen who’d fucked an entire town or a sports team. She wasn’t into group sex or even banging strangers. She liked to be wined and dined. She had high standards for men she’d be with romantically. But if the look he was giving her was typical for how men would approach her once they knew that she wrote romance, she’d have to come up with a pen name. It was becoming clear that keeping her writing persona separate from her true identity would be the best plan.
Chris leaned back in the booth and waved his hand as if wiping away dirty thoughts. “Of course not. I didn’t think you did.”
She raised an eyebrow.
“Look, you don’t owe me an explanation. I love books. The only bad book is an unread book, right?” Hopefully that appeased her.
Thankfully the waitress set their plates on the table in front of them at that moment. Clearing his throat, he thanked the waitress and grabbed a piece of bacon and shoved it into his mouth before he said something stupid.


Cassie picked up her fork and jabbed the liquid center of her egg. The yolk spilled out and flowed over the egg white. Would everyone look at her like she was a weirdo if they knew what she wrote? Could she live with that?

Karen Tjebben lives in central North Carolina with her wonderful husband, twin daughters, and two hamsters. When her girls left for kindergarten, Karen discovered that she needed to fill her days with something, and that was the beginning of her writing career. She loves to create worlds filled with unique characters that she hopes will delight and raise goose bumps on her readers. In her free time, she enjoys traveling with her husband and seeing the world through her daughters' eyes.

#Giveaway #CoverReveal Death at the Dakota by M. K. Graff 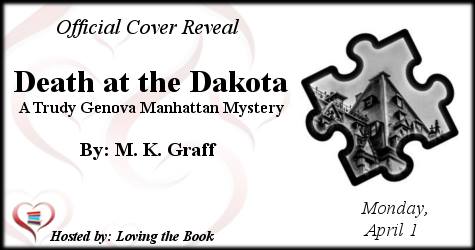 Nurse Trudy Genova is making plans to take her relationship to NYPD detective Ned O'Malley to the next level, when she lands a gig as medical consultant on a film shoot at the famed Dakota apartment building in Manhattan, which John Lennon once called home. Then star Monica Kiley goes missing, a cast member turns up dead, and it appears Trudy might be next. Meanwhile Ned tackles a mysterious murder case in which the victim is burned beyond recognition. When his investigations lead him back to the Dakota, Trudy finds herself wondering: how can she fall in love if she can't even survive?

Readers of Death Unscripted, the first book in the Trudy Genova Manhattan Mystery series, will find the same pleasures in this sequel: fast pacing, engaging characters, twists and turns on the way to a satisfying close. Once again M.K. Graff reveals her talents in crafting this delightful mix of amateur sleuth and police procedural.

First, let's Find out what others are saying about the book:


I fell in love -- not only with co-protagonists, Trudy and Ned, the richly detailed and historic setting of The Dakota, and the unique cast of characters, but with the unusual plot of Death at the Dakota. Sherry Harris, Agatha Award nominated author of the Sarah Winston Garage Sale Mysteries

And now for the Cover 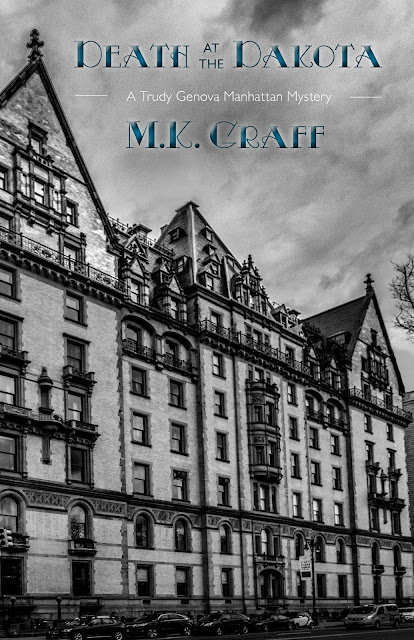 Posted by Elisha German at 4:35 PM No comments: