Juniper Smoke has been optioned to be a major movie!

Hollywood, CA – January 26, 2017 Juniper Smoke, a fresh new series about a nerdy curator, will now be optioned as a major film by Cinespots, Clover Entertainment Inc. and two other production companies (TBA). The Juniper Series is written by Sadia Ash and edited by Beth Bruno. The trilogy consists of JUNIPER SMOKE and KYLE & JUNIPER (Book I & II in one 700 page e-book $1.99, Paperback $17.99) and the upcoming, FINDING JUNIPER.

“Juniper Smoke cuts a sweet story of love and nostalgia with the razor edge of modern dating,” says producer Stephanie Johnson of Clover Entertainment. “It blends stark reality with the fun of a romance universe.” Johnson was key in bringing the Crossfire Series by Sylvia Day to Lionsgate and says in a film world lacking diverse female voices, Juniper Smoke is a welcome addition.

Juniper Smoke centers on the quirky affair of Juniper Mills and Kyle Paxton, who are as different as Red and Blue America. He is a micro-camera inventor from San Francisco and she is a sassy museum curator in Michigan. The sole caretaker of her autistic twin and comatose mother, Juniper was raised to hate all men. Haunted by Chloe’s ghost, a girlfriend who commits suicide, Kyle schedules dating with clockwork precision. When he falls for Juniper, his life spins off its axis.

“The series is an edgy drama with dark secrets, complex characters, mystical elements, and more plot twists than a Six Flags roller coaster ride,” said Tedd Faraone, President of Cinespots. “We look forward to seeing Juniper Smoke in theaters.” Cinespots is a distribution company that ran the novel’s book trailer in 108 theaters across America.

In an age of casual hook-ups, can love survive the test of time?

Juniper and Kyle meet when she is dangling forty feet from a museum scaffolding.

Juniper Mills is a straitlaced but sassy curator at a History Museum. Raised by her mother to hate men, she worries she’ll die a frigid scholar in a musty house with an army of cats and a lake of books.

Kyle Paxton is an intense and intimidating inventor of a successful micro camera from San Francisco. He schedules dating like his work—with robotic precision. This helps him cope with the dark memories of his ex-girlfriend, who still haunts him. Not looking for love, he only hooks up with Amazonian models.

When he joins the museum board, Juniper falls for him. She wants him, but knows it's going to be as hard as catching the ocean in a teacup. Juniper becomes Kyle’s obsession, but the tragic secrets of his past cloud his feelings.

Juniper manages to knock Kyle’s world off its axis and their galaxies collide in this very unfairy tale. But can they overcome their differences and stop a hateful and vindictive person from tearing them apart?

Juniper Smoke is a smoking hot read with fun twists, dark secrets and edge-of-your-seat drama. Nothing is as it seems and no one behaves as you would expect.

Sadia Ash is an art and history obsessed geek who loves all things British and literary. She has held jobs that always involved writing (and never math) in some way. She is currently working on two other novels and a film script. She lives in sun-drenched Cali with her husband—who is her best friend—and two bright kids.

Posted by Elisha German at 9:49 PM No comments: 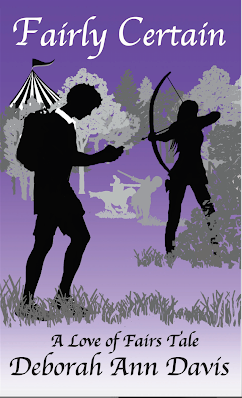 Synopsis:
What happens when a Computer Geek challenges a Medieval Outlaw?
PETIR TAKES A ROUGH TUMBLE IN THE CONNECTICUT WOODS, and awakens in the middle of old England. His instinct to freak out is tempered by the arrival of a fair maiden wearing a bow… and arrow. In his college world, fair maiden types don’t ordinarily go for computer geek types, but for some reason he is no longer in his world. Petir is fairly certain he can try whatever he wants without consequence.
WITH THE CONFLICT BETWEEN THE ROYALS ESCALATING, MAID RIANNE has joined the outlaws hiding in the woods, outwardly defying the handsome and accomplished knight to whom she is promised. She is fairly certain she is simply flattered by Lord Petir’s uncensored admiration of her skills with the staff and bow, the same unmaidenly pursuits disdained by her knight. But, that does not explain her reaction to Lord Petir’s unguarded gaze.
TO PETIR’S DELIGHT, AND MAID RIANNE’S DISMAY, the outlaws invite him to join their merry band. What better way to get close to her? Throwing caution to the wind, Petir decides he has nothing to lose by pursuing Maid Rianne, until she is captured by the enemy. Now, a geek with no ability to defend himself must find a way to rescue the fair maiden.

Review:
The author has a really unique and different way of writing that brings in different genres while not confusing the reader but instead, making the reader excited to turn the page to see how a scene is going to play out and how the plot thickens. She is able to mix what seems to be historical (from falling out of a tree and waking in a different time), sci-fi / fantasy (strange realm he has found himself in), and romance (wanting to puruse the young maiden). I started out reading this book thinking I would simply be filling in any possible holes from the other book in this set (This is the first book in the Love of Affairs series, the first book Fairly Safe by Deborah Ann Davis.
You can find my review, here. ) . And although these two books could be read as stand-a-lones, I prefer and recommend reading them together simply because they are both pretty good reads (sort of like reading Nancy Drew books- all stand-a-lones but awesome as a series in order).  I really like how she did Petir. He is from a different cut of cloth. He's the cute guy who is really smart and nerdy. As to not give any spoilers, the one negative thing I have to say about this book is the explanation of the character Petir. It felt unsettled and rubbed me the wrong way. However, that said, I did enjoy this read and would recommend it.

I received this ARC in exchange for an honest review.

About the author:
I currently reside in lovely Connecticut where I enjoy dabbling with living a sustainable life, developing my Girl’s Guide To Good Guys: The Power of Being Patient & Picky program to promote an empowering way for teenage girls to see themselves, writing novels for my Love of Fairs series (Fairly Obvious will be out in 2017), dancing, playing outside, and laughing really hard every day. I promote increasing the amount of movement throughout your day via Wiggle Writer posts on my blog, Merry Meddling, and on Twitter @WiggleWriter and @DeborahAnnDavis.

Posted by Elisha German at 3:12 PM No comments: