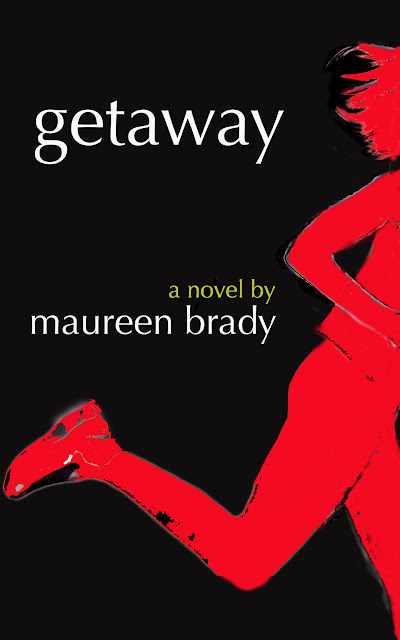 After stabbing her abusive husband and leaving him dying on the
kitchen floor, Cookie Wagner flees to remote Cape Breton, Nova Scotia.
For a moment, she seems to have gotten away with murder. But, consigned
to a secretive life with a new name and the need to be on constant
alert, she faces all she has not gotten away with. She is helped by the
recently widowed Mrs. Biddle, who offers her a place to stay, and the
lobster fisherman Butch, who gives her a job and later falls in love
with her. Walking the cliffs and beaches, taking in the scruffy
windblown plants that survive the buffeting wind by growing at an angle,
she begins to heal.

Yet, there is no leaving behind the notion that Warren is dead as the result of her action.
Or is he? And if not, will he one day come to find her?

Sexual harassment and abuse are all over the news these days, often
involving celebrites and other well-known figures, but Cookie, the
protagonist of Getaway, is no celebrity. She’s an ordinary
woman married to a working class guy who drinks too much and resorts to
violence. Their story reveals how endemic the phenomenon of abuse is,
and the quandary Cookie lands in when she fights back.

Praise for Getaway:
“Sensitive, sensual, and stirring. “Getaway” is a true page-turner,
but one with heart and with context. I couldn’t put it down until I got
to the end, not just to find out what happened, but also to
discover who these intriguing and complex characters would develop into.
An extremely satisfying read!”
Danielle Ofri, author of What Patients Say, What Doctors Hear, Editor-in-Chief, Bellevue Literary Review.
Amazon
Link:
https://amzn.to/2JSN0Yx


Review:
This is a moving and tension filled read about Cookie, a battered wife desperate to get away from her abusive husband. You sympathize with her and for her. For her situation, what she feels is necessary to get her out of her situation...So, in a plight to get away from her husband, she stabs him and runs off to start a new life with a new name. But her fear an guilt is keeping her from moving on and keeping her alert of her surroundings. Will she ever find peace?
This was a well-written story that some may find difficult to read due to the context. I was pulled into the story from the very beginning and empathized for Cookie. Trying to find her inner strength to get away from a dangerous situation. Brady writes a tantalizing, thought-provoking, yet entertaining read that will not bore you.

Cookie dove between the tall grasses, jarred with adrenalin.
In the gloom, she could barely make out the blue cottage on the other side of the
lake, but her eyes clung to it desperately. It was up for sale and she thought,
unoccupied. Maybe if she bushwhacked around the lake and found her way there
without being seen, she’d be able to hide behind it.

The air sparkled. Everything around her seemed to vibrate
with too much life. When a bullfrog glugged in the reeds, she jumped, stood
still, then made herself get moving again. This was no time to try to
understand what she had done.

She inched along the shoreline, her feet sinking into the
mud.

Her foot slipped off a root and twisted painfully. Damn weak
ankle, she muttered, working it before she pushed on.

A three-quarter moon came up to light the way a bit, but it
was getting cold. She stopped to put on her windbreaker, the one thing she’d managed
to grab from the hook by the door. A good thing she had, even though it was a
bright aqua, too colorful for someone
who wanted not to be seen.

Squatting, she buried her face in her hands. Her stomach roiled
and she thought she might throw up. My God, Warren,
why did you have to come after me like that?

She was struck by the sound of twigs breaking underfoot. A bear
or a coyote? Someone coming after her? That got her moving again, making low,
humming noises to keep whatever it was at bay.

When she finally came out to the clearing, she scooted
through tall tufts of grass in front of the blue cottage and crept around back.

The building blocked the moonlight as she huddled against
the cinderblock cellar wall, her arms wrapped around her legs, her feet wet and
freezing. She stared into the night as the fireflies spit tiny patches of light
before flickering out.

As she adjusted to the dark, she noticed a hump a few feet away,
a rounded Bilco cellar door. She stood and lifted the handle.

Detecting a little give, she lifted again, hard, and one
side came up. Three steps down, there was a wooden door. It, too, had been left
unlocked, so the knob turned and she was in.

She sunk to the cellar floor and wrapped her windbreaker around
her wet pant legs but couldn’t stop her teeth from chattering. Trying to still
her jaw only made her whole arm shake. She remembered once as a child when her
teeth had rattled on this way. It had been fear, not cold that time her father
had raised his large square hand but stopped just short of slapping her across
the face.

When she finally found the remains of a matchbook in her pocket,
the first match she struck crumbled. She stood up and struck another. The light
flared up shockingly fast and extinguished itself before she’d seen a thing.
She caught a glimpse of a stairway, which she shuffled toward, hands out ahead
of her, searching for a light switch.

In the flare of the last match, she spotted a worktable
under the stairs. Patting along its surface, she touched something soft and
squishy, almost like human skin. She jumped back, horrified.

Gathering her courage, she reached out again but she must
have turned when she jumped back because, where the squishy thing had been,
there was nothing, not even the bench. She made a quarter turn and reached out
again. Still nothing! At least it wasn’t the squishy thing, but where the hell
was she and what was that anyway? 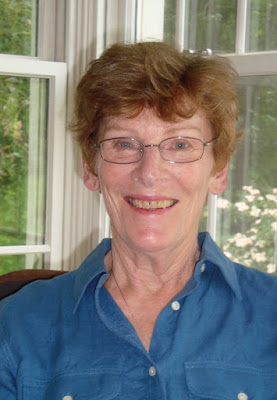 Though Maureen Brady wrote the humor column of her junior high school
newspaper, she didn’t actually comprehend that she was a writer until
after she had moved to New York City in her twenties, where she began
taking writing workshops at The New School and then fell headlong into
the consciousness raising groups of the early 1970’s.

She published her first novel, Give Me Your Good Ear, in 1979, and it was published by The Women’s Press in England in 1981. Her novel, Folly,
was excerpted in Southern Exposure, received wide critical acclaim, was
nominated by Adrienne Rich for an ALA Gay Book Award and was reprinted
as a classic by The Feminist Press. She published a collection of short
stories, The Question She Put to Herself, in 1987, then turned to writing nonfiction in the ’90’s, publishing Daybreak: Meditations for Women Survivors of Sexual Abuse and Midlife: Meditations for Women. She returned to fiction with the novel, Ginger’s Fire, and her most recent novel, Getaway.

Her recent work has appeared in Sinister Wisdom, Bellevue Literary
Review; Just Like A Girl; Cabbage and Bones: Irish American Women’s
Fiction, Mom, In the Family, and Intersections: An Anthology of Banff
Writers. Brady’s essays and stories have been nominated for the Pushcart
Prize and were finalists for the Katherine Anne Porter Fiction Prize
and the Nelsen Algren Short Story contest.

An Adjunct Assistant Professor, she teaches creative writing at New
York University and New York Writers Workshop @ the Jewish Community
Center, and works as a free-lance editor and tutor, helping writers
across the spectrum take their writing to the next stage.

A co-founder of Spinsters Ink, Brady edited such books as The Cancer
Journals by Audre Lorde and The Woman Who Breathes Fire by Kitty Tsui.
She also served as a panelist for The New York State Council on the Arts
Literature Program and as a fiction judge for Oregon Literary Arts. She
is a founding member of The New York Writers Workshop and has long
served as Board President of Money for Women Barbara Deming Memorial
Fund.

She has received grants from the Ludwig Vogelstein Foundation; New
York State Council on the Arts Writer-in-Residence; New York State
Council on the Arts CAPS grant; Holding Our Own; Briarcombe Foundation;
and The Virginia Center for the Creative Arts Fellowship to The Tyrone
Guthrie Centre, Ireland. She was the winner of the Saints and Sinners
short story contest for 2015 and is also a Saints and Sinners Hall of
Fame winner.

She lives in New York City and Woodstock with her long term partner, Martha, and their joy dog, Bessie.

Posted by Elisha German at 3:42 AM