The Illusion of Certainty by Greg Messel REVIEW 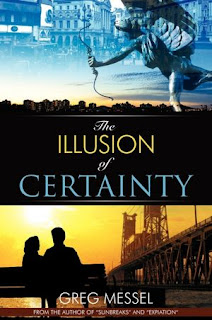 "The Illusion of Certainty" follows two parallel story lines. Marc is a successful businessman who seems to have everything-a great job, a beautiful wife, a house in an upscale neighborhood of Portland, Oregon and two great kids who are preparing for college. But something is not right. Marc is unsettled by the sudden change in his wife, Aimee, who seems distant and unhappy. What is going on with her? The second storyline involves a successful young attorney Alexandra Mattson. Alex, as she is called by her friends, meets a handsome young cop, Sean, during an unexpected crisis in her neighborhood. Sean and Alex seem made for each other and begin to merge their futures in a world of uncertainty. The only certainty in life is that we will face uncertainty. Despite all of the technology and controls available in the modern world, sometimes the only comfort comes from the human touch.

This book was so good and realistic. And even though it was two story lines it was easy to follow. It starts off with Marc going on a trip to "get away from it all and clear his head" after a string of bad events happened in his life. It then jumped into the explanation to why he was going away; the string of bad events.
In the end, he realized his best friend wasn't really his best friend but his wife's lover. The same man he poured his heart out too about his marital problems on Sundays; why his wife was always so cranky and short tempered with him, why she never seemed interested anymore. How embarrassed, infuriated, hurt, betrayed, angry, confused, etc Marc must have felt when he saw Aimee and John kissing.  But before he found them kissing  he already has a job he loves and makes good money but he gets offered another great job with triple the money plus nice bonus(es). The downside? A lot of traveling. He didn't want to be away from his wife that much. But after finding out about Aimee and John it worked out perfectly for Marc.
Around the time of this first storyline is when the second storyline comes into play.
An tall attractive red headed woman name Alexandra, Alex for short is a lawyer and just recently moved to Peacock Lane, a touristy place during Christmas. As she is leaving for work one day there is a bad accident and she stops to help, that is how she meets her cute boyfriend cop, Sean. On New Years Eve, Alex and her best friend Monica Lee meet for drinks at the same Starbucks Marc is at. Marc accidentally leaves his blackberry on his table and Alex sees that and catches up with Marc and gives it to them. Of course neither of them realize this chance meeting with each other is only the beginning.
At Alex's Christmas part, Sean proposes. And as they begin to try to merge their life together there is a lot of uncertainty.
There is so much more I want to say about this book. But I don't want to give it all away! I loved reading this book; partly because it is a bit challenging for me to read a book with more than one storyline going on and me not get lost and confused. But the author did an excellent job and I truly had a hard time putting this book down. I also think that this is a book that would be great as a movie. But I am one of those book lovers that feel that a lot of the great books I/we read should be turned into a movie. I know people who hate having books turned into movie but I love it.
I also recently found out from the author that he has another book coming out in the Spring (I hope I remembered that correctly) called Expiation; Greg Messel's second novel. I personally cannot wait to read it.
I really enjoyed reading The Illusion of Certainty and recommend this to everyone out there.


I received this book for review from Pump Up Your Book

"Expiation" is my second novel and is now available. "The Illusion of Certainty" was my third novel. Thanks for the review and the opportunity to be on your blog. I'm currently nearing completion of my fourth book,which will be a mystery series.

What a wonderful review! Thanks so much for reviewing his book, Elisha!