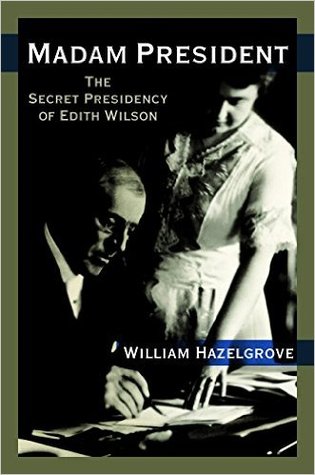 Peek behind the scenes at Edith Wilson, the first woman president.
After President Woodrow Wilson suffered a paralyzing stroke in the fall of 1919, his wife, First Lady Edith Wilson, began to handle the day-to-day responsibilities of the Executive Office. Mrs. Wilson had had little formal education and had only been married to President Wilson for four years; yet, in the tenuous peace following the end of World War I, Mrs. Wilson assumed the authority of the office of the president, reading all correspondence intended for her bedridden husband and assuming his role for seventeen long months. Though her Oval Office presence was acknowledged in Washington, D.C. circles at the time--one senator called her "the Presidentress who had fulfilled the dream of suffragettes by changing her title from First Lady to Acting First Man"--her legacy as "First Woman President" is now largely forgotten.

William Hazelgrove's Madam President is a vivid, engaging portrait of the woman who became the acting President of the United States in 1919, months before women officially won the right to vote. A Selection of the History Book Club, Military Book Club and Conservative Book Club.

This was a fascinating read. I am so happy I had the chance to review this book. This story is about Woodrow Wilson's second wife Edith Wilson and how she took the role or job of keeping the government running smoothly as possible after her president husband, Wilson, was incapacitated after his stroke. Basically behaving as the President. I loved the history of this book, the page turning quality this book had, and showing that the right woman can be in the role of presidency.
I personally tend to be analytical, and this book not only took my on an analytical exploration of this time in history, inside the white house, but allowed me to tap into my analytical side while reading the book. And lastly, I loved the twists and little pinch of secrecy that this story held, and not the secret that Wilson's wife basically held office...

I recommend this book!

I received the unedited ARC of this book in exchange for an honest review.

Posted by Elisha German at 1:24 PM