**Giveaway** The Truth Inside

This post is part of a virtual book tour organized by Goddess Fish Promotions. Trish Edmisten will be awarding a $20 Amazon/BN to a randomly drawn winner via rafflecopter during the tour. Click on the tour banner to see the other stops on the tour. 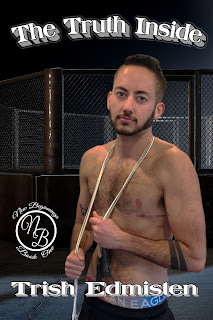 For as long as he can remember, Nate’s dreamed of being an MMA fighter. Nothing is going to stand in his way and no one is going to distract him. Everything is going according to plan when Natalie comes along. Even though he wasn’t looking for love, Nate can’t help falling fast and hard. Smart, sweet and supportive, she seems too good to be true, but it’s actually the other way around. Nate isn’t good enough for her, and he’s keeping a secret that will change everything between them. One day, she’ll see the truth inside of him. Until then, Nate’s determined to keep Natalie in his life for as long as he can.

Scooting forward until their knees touched, Natalie reached up and framed his face with her hands. “It doesn’t change anything between us, Nate.”

“The only thing that changes is now I know. That’s it, nothing else.”

“It really doesn’t matter to you?”

Nate still looked doubtful, but she wasn’t surprised. Having spent his whole life being confused by and ridiculed for what he was, she knew better than to expect it to be easy to convince him it wasn’t a deal breaker.

“It matters, but it doesn’t change the way I feel about you.”

A hint of wonder sparked in his eyes. “How is that possible?”

“Would it matter to you if I’d been born male?”

“No, but that’s different.”

“It’s really not. I fell in love with who you are, not what you are. You may have been born a female, but you’re not. You never have been.”

Natalie pressed a finger to his lips, cutting off his words. “What’s between your legs doesn’t make a difference to me. It isn’t what I fell in love with.”

Tears glistened in his eyes as he took a shaky breath. “You say that now, but you haven’t seen what’s under my clothes.”

“I don’t have to see what’s under your clothes to decide how I feel about you. The only parts of your body I care about are the parts that make you who you are,” Natalie said softly. “Your heart and your mind are what matters.”
About the Author: Trish Edmisten is the author of several novels, including Extraordinary Will, a Reader Views Literary Award Winner. Her work has appeared in Writer’s Journal, Creative With Words and A Long Story Short. Besides being an author, she holds a degree in criminology. Trish lives in Fresno, California with her husband and their teenage daughter.

Buy the book at Amazon.com.

a Rafflecopter giveaway
Posted by Elisha German at 4:00 AM