Once Upon a Christmas by Christina George 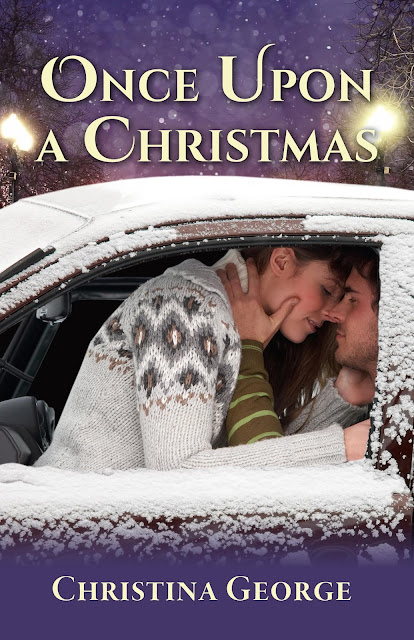 Is it ever too late for happily ever after...?
Callahan is one of the hottest guys to move into Harper’s Corner in a long time, partly because he’s also a complete mystery.
He keeps to himself and leads a quiet life, rumors swirl around that he used to be in the military...but no one knows where he came from, or what brought him to their small town.
When Stevie’s parents have a health crisis, she’s forced to take leave from her very New York existence: including a high-powered job at a big publishing house and explosive sex life with her wealthy, handsome and appropriately pretentious boyfriend, to step in and ensure the preservation of the family’s longstanding bookstore.
With the first order of business being to fire Callahan, the unqualified shop assistant her dad hired.
Though as many women from Harper’s Corner can tell you, things change when you come back home.
So firing this attractive, brooding, secretive man turns out to be much harder than she originally planned…
And when his past comes back to challenge him, he can’t keep hiding from what happened.
I invite you to tuck into another Harper’s Corner story about finding love when you least expect it…once upon a time in a bookstore…
Excerpt:


Stevie looked at her phone for probably the fifth time in as many minutes. The text string remained unanswered.
Where areyou?? she tapped quickly into her phone, then looked up at the woman sitting opposite her, reading glasses perched on her nose, a pad in her hand. She appeared deep in thought while writing something down.
“I’m so sorry about this,” Stevie tried to sound calm rather than annoyed, as though she was not at all aggravated that her boyfriend was missing their therapy session.
Again.
Not surprising that the edge in her voice was unmistakable.
Dr. Ruth Ann Wilson, therapist extraordinaire although wildly unconventional, was one of the best therapists in New York. Stevie met her a few years back, when the good doctor released her first book. They’d become somewhat friendly, and when Stevie’s boyfriend suggested therapy, Ruth Ann Wilson was the only therapist who came to mind.
Ruth Ann looked at Stevie and smiled. “Stevie,” she said, “what does your boyfriend call you?”
The question caught her off guard. Stevie slipped her phone back into her purse, having officially given up on waiting for him to text her back.
As she did, a message pinged in.
I’m so sorry Stephanie darling, I got busy at work. I’ll call you later.
Stevie let out a sigh and held it up for the therapist. “He’s held up at work.”
“His job must be very important to him,” Ruth Ann observed, setting her notepad down. “This is the third session he’s missed.” The reminder was unnecessary. Stevie was painfully aware of how many sessions her boyfriend had missed.
Stevie could only nod. Her boyfriend, Gable Pierce, was beyond busy. Stevie got up and paced over to the tall windows lining the wall of Ruth Ann’s office. Down below, the New York city streets were teeming with people.
What am I doing here? She really had no idea. Not that the doc wasn’t helpful, but these sessions weren’t her idea to begin with.
She tried to ignore the tendrils of a headache gathering around her temples, and she unpinned the bun at the back of her head—the style Gable preferred—and shook out her light brown hair.
“Isn’t he the one who suggested these sessions?” Ruth Ann asked.
Stevie nodded.
“But he’s been unable to show up for any of them,” Ruth Ann added gently.
Stevie started to say something, but the therapist held up her hand. “It’s time to stop making excuses for him, Stevie. He’s not interested in these sessions, and, I need to tell you, I think the same goes for you, my dear.”
Stevie blinked and let the reality of what the doctor was saying sink in.
“I’m sure that’s not true. I know him.”
Ruth Ann only nodded, “Maybe it is true, but tell me, what does he call you?”
That damned question again.
What the hell did it matter what Gable called her?
“Stephanie, he calls me Stephanie,” Stevie finally answered.
“Why is that? Doesn’t everyone else call you Stevie?”
Stevie shrugged. “He prefers it, I guess.”
Ruth Ann leaned closer.
Stevie knew that lean well. It meant Ruth Ann preparing to deliver some bit of earth-shattering wisdom. Or maybe it was semi-wisdom. Stevie still wasn’t sure.
She already had two prior sessions with Ruth Ann, which Gable had pushed her to set up to help “further their relationship.” Further to what Stevie wasn’t sure, but Gable kept pushing, and she finally agreed. Not that she had anything against therapy, per se. Stevie just wasn’t sure they needed it. They never fought. In fact they agreed on most things. But, as the good doctor had helped her discover during therapy, those were mostly things Gable wanted anyway.
“Stevie, when you first came to my sessions, I asked you to call me Ruth Ann, and you complied. During that session, I also asked you how you preferred to be addressed, and you told me. I call you Stevie, and you call me Ruth Ann. It’s basic mutual respect.”
Stevie narrowed her eyes and looked away. “So you’re saying Gable doesn’t respect me?”
Ruth Ann let out a braying laugh. “I should think that’s pretty damned obvious. I mean, he hasn’t showed up for three sessions he suggested and paid for, and he calls you by a name none of your friends use. Sorry, dear, but what would you call it?”
When Stevie didn’t answer, Ruth Ann forged on. “Listen, therapy is all about helping a patient discover things on their own, but sometimes ‘things’ need a little nudge, if you know what I mean.” Ruth Ann gave her a small wink. “So here’s your nudge: people will tell you how they feel about you, but you have to be willing to listen. I think Gable is telling you, in the loudest passive-aggressive voice that he can, that he’s not really interested in you. Well, except as a social trophy, given your job and how established and respected you are in the industry. Gable wouldn’t associate with anyone who didn’t have chops, and I’m sure he wouldn’t be caught dead with mere arm candy.”
As Ruth Ann’s insight sank in, Stevie felt the splash of cold truth hit her. Despite her protests, despite having invested two years of her life in this relationship, she had a creeping conviction that Ruth Ann was right.
Gable didn’t care.

About Christina George
I’ve worked in publishing for twenty years and I sincerely love books and authors. I started this journey with my own books planning to write just one, and then well – all I can say is the stories kept coming. My original series The Publicist, follows Kate, Mac, Nick, Vivienne and a host of other awesome characters as they make their lives in New York, amidst the chaos that publishing often brings with it.
I am now exploring a fictional small town called Harper’s Corner. This series is so fun, because there are so many characters in this town, from sexy firemen and hot Army guys, to an awesome group of women that I affectionately call “the coven.” These books will explore each of these characters, and their journey to finding the loves of their lives.
I love writing, and I love reading and if I’m not actively writing a book, I’m probably dreaming of what I’ll write next.
Please feel free to email me at authorchristinageorge@gmail.com with your thoughts on any of my books.
And if you'd like to connect on social, here are my details:
Instagram: Publicistgal
Twitter: Publicistgal
Facebook: facebook.com/christinageorgeauthor/
Website: www.christinageorgeauthor.com
Posted by Elisha German at 2:30 AM