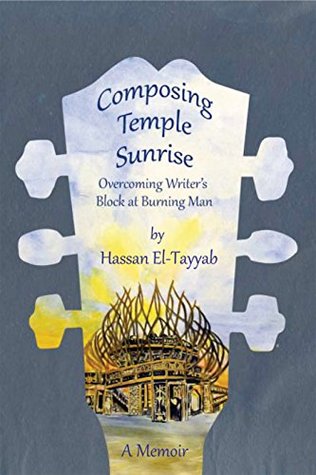 In this candid, inspiring memoir, singer-songwriter Hassan El-Tayyab of American

Nomad takes us deep into the heart of what it means to chase a creative dream. After experiencing multiple losses (family, home, love, job, self-confidence), El-Tayyab sets out on a transcontinental quest that eventually lands him in Nevada’s Black Rock Desert. His vivid descriptions, paired with artist’s renderings, capture both the vast, surreal landscapes of the Burning Man festival and the hard practice of art-making. Composing Temple Sunrise is both a page-turning adventure and a road map for anyone struggling to forge their way.

This memoir read like poetry, which made it so eloquent and inspiring to read. The author has an art with words that make his memoir like velvet to read. His prologue is enticing and vivid, as though it were a painting. He tells his story about being fired as a special education teacher due to budget cuts that leads to his trip across country.  I did find his attitude toward being fired interesting...He was fired due to budget cuts, ans they chose him because of his lack of initiative and focus, and he didn't fight for his job because he wasn't going to fight for a job he only half wanted anyways. However, the explanation afterwards makes sense. Anyway, this memoir as a whole is inspiring and well-written. However, there were parts for me that seem to drag on (too wordy) for me; but that really is my only complaint.

I do recommend this memoir to others, it is a quick read, easy read, and maybe will inspire others to look at their own life and think about tuning the areas that may need help.

I received this book from the author in exchange for an honest review as part of the Poetic Book tours
Posted by Elisha German at 4:06 PM