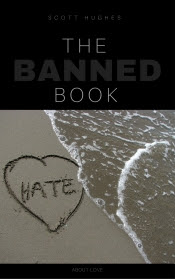 This booklet was not quite what I expected. At all. In fact, it was the exact opposite. It was great. Below I have left the message from the author for clarification.  This is a good and quick read with a good and clear point of view.
There was one point in this booklet I didn't quite agree with, and that was from page 3:
"Hate isn't a means. It just is what it is. That may sound like meaningless poetry or platitudes, but it's not. Hate doesn't work as a means. It doesn't have desirable ends." I can't say I agree with this. How many people commit crimes in the heat of the moment out of hatred?

Aside from my disagreement of this portion of the booklet, this is a good read and I recommend it to all. It really makes you think.

Message from the Author
On June 13th, 2016, I released this short booklet for free through Amazon. I pledged to donate 10 cents per copy downloaded through Amazon to a charity that helps victims of sexual assault. The winning charity was RAINN. Because the book is free, there were no proceeds from which to make the donation, but rather I took a financial loss to give to charity and to spread my message--a message I passionately believe in and hope will change hearts and help make the world a better place, especially a better place for victims and would-be victims of sexual assault or other violence.
In just a few days, the booklet earned over a thousand downloads. It became the #1 bestseller in the entire Philosophy category on Amazon.
The booklet was nearly unanimously well-received by those who actually read it.
However, there was quick outrage from people who did not read the book but who judged the book by its cover and title (the original ones) and jumped to the conclusion that the book was pro-rape or that I wanted violent criminals to not be put in jail. Both of those things are absolutely false. Both the booklet and I are clearly anti-rape and supportive of incarcerating dangerous offenders.
The booklet is not really about the people who we hate at all. It is about me and about the reader. It is about how hate doesn't help victims and doesn't protect future would-be victims. It's about something that cannot be described in a blurb or a tl;dr summary (too long; didn't read).
Nonetheless, the outraged people who believed utterly false things about the book viciously attacked me publicly and spread false rumors about the book, especially via Twitter. For just a few examples, I was told publicly on social media to "burn in hell". People who did not read the book said things like, I will spit in your face if I have the chance. That's not the worst of it, but the worst of it and the much more vulgar of it would not be good to repeat. At least one person attempted to hack my Twitter account. Ultimately, the passionately outraged people got the book abruptly banned from Amazon, only a few days after release.
How can a book about love result in such vicious outrage from people who did not even read it? Well, remember love challenges hate, and hate is irrational and vicious. The haters react that way not because of what's wrong with love and what lovers believe; they react that way because of what's wrong with hate. For instance, only two people were quoted in this short booklet. Both of those people were killed for what they said. So, if I merely had my book banned when quoting much greater minds and much greater words than my own, I suppose I got off easy.

I recommend this read!
Posted by Elisha German at 8:24 PM