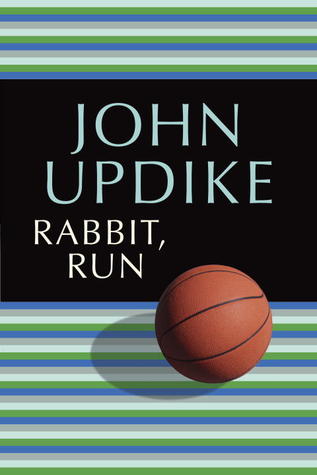 Rabbit, Run is the book that established John Updike as one of the major American novelists of his—or any other—generation. Its hero is Harry “Rabbit” Angstrom, a onetime high-school basketball star who on an impulse deserts his wife and son. He is twenty-six years old, a man-child caught in a struggle between instinct and thought, self and society, sexual gratification and family duty—even, in a sense, human hard-hardheartedness and divine Grace. Though his flight from home traces a zigzag of evasion, he holds to the faith that he is on the right path, an invisible line toward his own salvation as straight as a ruler’s edge.

Review:
Throughout the book I kept hoping that Rabbit would find himself and become a man, husband, and father but he just kept getting more confused. It was apparent that this man couldn’t make up his mind about anything and that he would drift forever lost. Also what was abundantly clear was that he had no conscience. He just couldn’t figure out what was right and what was wrong nor would he take responsibly for his part in any of the events that lead to his babies death, his wives destructive life, his son’s feeling of loss or his mistresses pregnancy.

Reverend Eccles was the one of two redeeming characters in this book. He tried really hard to help Rabbit but in reality Rabbit starts to lead him astray no matter how hard he continually tries to help. Ruth, his mistress, well she was someone to be admired. She understood who Rabbit was, stood firm and strong about them ending their relationship with her taking care of the baby they would still have.

The book ended just as I thought. Rabbit is so confused. STILL! Bye bye Rabbit! Keep running away from life but realize you will never have one you love till you confront yourself.

I give this 1 star. I just disliked the main character, Rabbit, too much to find any value in this book.
Posted by Elisha German at 5:48 PM