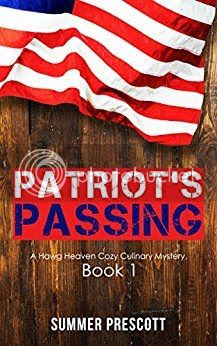 The indomitable widow of a Marine sniper is faced with the reality of starting a new life with her teenage son, after hearing the awful news that her loving and brave husband was killed in the line of duty. Drawn back to her childhood home, Rossalyn Channing meets up with old friends and begins her healing process, safe in the loving company of her parents.
Irresistibly drawn to a mysterious little building in a small town, Rossie impulsively buys it and makes big plans for an eatery that her late husband would have loved. Things are not always as they seem in quaint small towns, however, and she begins to wonder if the challenges that she faces are insurmountable. The determination of the fearless military wife is strong, but will she prevail as a stranger in a strange land?
Add to the mix a body found on her property, and scary strangers randomly appearing to torment her, and you set the stage for the first book in the Hawg Heaven Cozy Culinary Series. This poignant tale of courage in the midst of adversity will inspire you, and leave you hungry for more.

Other Books in the Hawg Heaven Cozy Culinary Mysteries Series:

Rossalyn Channing’s savory new bacon-heavy business in a small town is booming, and she, along with son Ryan, is settling in quite well, until one of her favorite television shows comes to town wanting to film nearby. Rossie directs them to a place that she knows and is dismayed when her location turns out to be tragic. Sinister character emerge on all sides, and Rossalyn fears for her life and Ryan’s safety. With the help of some unexpected friends, will she manage to solve the murder before it’s too late? Find out in this next exciting installment of the Hawg Heaven Cozy Culinary Series!

Rossalyn Channing's world is rocked when a stalker gets up close and personal. She receives surprises visits and surprise bouquets from a would-be suitor who was recently released from jail. Things take a dramatic turn for the worse as she becomes the suspect in a local murder, and everything turns upside down when a close ally seems to suddenly be acting suspiciously. Will the events that occur be enough to drive the newcomer Rossalyn, and her son Ryan out of their small town? Or will Rossie figure out who's been lurking in the shadows, before it's too late?

Rossie’s accountant confesses a possible connection to the untimely demise of her coworker, and Rossie fears that the woman’s life might be in danger. Meanwhile, the single mom wonders if she’s losing her mind, or if there really is a stranger lurking about. Throw in a heaping helping of Jose’s amazing cooking, and a love triangle that just might be the end of her, and you have a hearty recipe for a good old-fashioned mystery, filled with action, drama, and suspense.

Summer Prescott is a best-selling Cozy Mystery author. Her highly regarded INNcredibly Sweet series continues to be a reader favorite, and The Hawg Heaven series has been tremendously well-received. The author spends her days creating new and inventive ways for her characters to solve crimes and save the day.