**Giveaway** Where it All Began by Lorana Hoopes 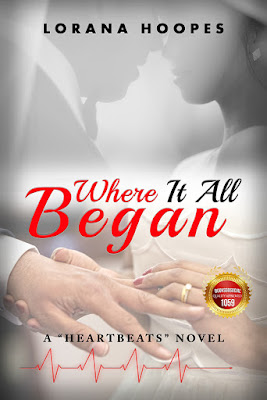 Where it All Began
by Lorana Hoopes

Sandra Baker thought her life was going in the right direction until she ended up pregnant. Not ready for a baby, her boyfriend pushes her to have an abortion. After the procedure, Sandra spirals into depression losing her relationship and turning to alcohol. Then she meets Henry, a strong Christian man, who shows her God's love. Will she accept God's forgiveness and more importantly, will she forgive herself?

I pulled four festively colored mugs down from the cabinet and filled them each with the creamy liquid. Handing two to Raquel, I picked up the other two, and we returned to the living room where we chatted idly as Christmas music played in the background.

When I could contain my joy and curiosity no longer, I clapped my hands and surveyed my friends. “Okay, who’s ready for gifts?”

They smiled, laughing at my exuberance, and I handed out a gift for each person. The little red box from Henry I picked for myself, holding it like a cherished toy. “Open yours first,” I nudged him.

He smiled and unwrapped the gift I had gotten for him. As he pulled out the book he had wanted, his smile deepened. “You remembered.”

“Of course I remembered.” I swatted him playfully on the arm. “You didn’t already buy it for yourself, did you?”

“No, I was hoping my very attentive girlfriend would cover that base.” He laughed and kissed my nose. “Okay, now you.” He stared at me as I began to unwrap the little box.

Beneath the red paper was a small black jewelry box. A lump formed in my throat, and I raised silent eyes on him.

Get a free novella or audio reading of The Wishing Stone by filling out the contact form at http://authorloranahoopes.site123.me/