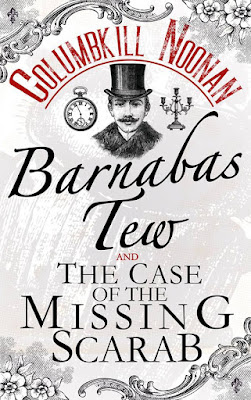 Barnabas Tew is a private detective struggling to make a go of it in Victorian London. Fearing that he is not as clever as he had hoped to be, he is riddled with anxiety and plagued by a lack of confidence brought on in no small part by his failure to prevent the untimely deaths of several of his clients. Matters only get worse when Anubis, the Egyptian god of the dead, is referred to Barnabas by a former client (who perished in a terribly unfortunate incident which was almost certainly not Barnabas’ fault). Anubis sends for Barnabas (in a most uncivilized manner) and tells him that the scarab beetle in charge of rolling the sun across the sky every day has been kidnapped, and perhaps dismembered entirely. The land of the dead is in chaos, which will soon spill over into the land of the living if Barnabas (together with his trusty assistant, Wilfred) cannot set matters to right. Pulled from his safe and predictable (if unremarkable) life in Marylebone, Barnabas must match his wits against the capricious and dangerous Egyptian gods in order to unravel the mystery of the missing beetle and thereby save the world.

“Perhaps there’s been a mistake,” he said. “Maybe I’m not really dead. Is there someone I could talk to? Someone who could straighten out this mess?”

“I just would have thought that dying would be, well, more noticeable,” said Barnabas sadly.

“So does everyone,” said Anti. “Almost no one really believes they are dead at first. And it must be especially hard for you, to have gone in such a, well, an unexpected way.” Columbkill Noonan has an M.S. in Biology (she has, in turn, been a field biologist, an environmental compliance inspector, and a lecturer of Anatomy and Physiology).
When she's not teaching or writing, she can usually be found riding her rescue horse, Mittens, practicing yoga (on the ground, in an aerial silk, on a SUP board, and sometimes even on Mittens), or spending far too much time at the local organic, vegan market.

Columbkill Noonan will be awarding a $25 Amazon/BN GC to a randomly drawn winner via rafflecopter during the tour.