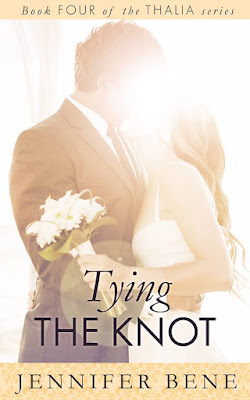 Title: Tying the Knot (Thalia Book 4)
Author: Jennifer Bene
BUY LINKS:
Amazon → http://amzn.to/2t4Zqni
(Also available in Kindle Unlimited)
***
“What does happily ever after look like after so much darkness?”

Blurb
What does happily ever after look like after so much darkness?
Over two years after the trauma of her kidnapping, and the auction that brought them together, Thalia and James are finally getting their happily ever after! Celebrating their love is a piece of wedding cake, but with the help of their wild and crazy friends from Purgatory, it’s destined to be a wedding day no one will forget.
A thrilling mix of kinky fun, laughter, surprises, and the same sexy heat you’ve come to expect from James and Thalia — Tying the Knot is the perfect conclusion to this series that has brought readers to the darkest of lows, and the highest of highs.
Now, it’s time for the light. It’s time to celebrate. It’s time to get married!


EXCERPT:
“Ye okay?” Kalen asked as James tossed back the whisky in his glass, the large cube of ice rattling against the sides.
“Of course, why wouldn’t I be?” Reaching up, James tugged at his collar, undoing another button as a flush of heat made him start to sweat.
“Well, ye look like yer about to faint. Should I bring over a pillow for ye to swoon on?” With a grin, Kalen ignored the steady glare his old friend returned and simply poured another two fingers of whisky into the glass. “Talk to me.”
“I’m fine,” James insisted. Turning, he leaned back against the table to watch the other men running a game of poker. They were chatting quietly, circled around the coffee table in front of the sofa, random taunts and laughs cutting in and out of the buzz. He knew he should be sitting with them, playing cards as they waited for Thalia and the girls to be ready, but every time he sat down his entire body thrummed with the urge to move.
And drink.
Which, he promptly did.
Letting the gentle burn of the whisky Kalen had brought from Scotland settle in his stomach, he found himself fidgeting. Circling the ice in the glass, spinning it around, and around — until Kalen grabbed his arm.
The other man looked at him stolidly, releasing his arm to sigh. “I’d ask ye if ye were having second thoughts, but I’m pretty sure ye would hit me.”
A frisson of anger pulsed through his veins. “You would be right about that.”
“Then will ye just tell me what it is?” Kalen crossed his arms, stepping back towards the windows to force James to face him. “What do ye need, brother? Want to shout at me? Go for a walk? A fight to burn off some energy? I promise I won’t hit yer pretty face.”
“I do not want to fight you, Kalen, don’t be a bastard.” Stealing another drink, he shoved a hand through his hair and walked past the man to stare out the windows at the sprawling grounds. He felt, more than heard, his friend approach.
“Is it about the deal between you and Jake?” For once, Kalen managed to keep his voice hushed, and for that James was grateful, because he’d hit the nail on the head.
Setting his glass down on the table beside the radiator, he leaned on it, flattening his other palm to the surface just so he wouldn’t clench his fist again. The dark, half-moon shapes he’d dug into his hands earlier couldn’t be there when he was putting a ring on Thalia’s finger.
He needed to get his bloody head on straight.
“No update?” Kalen asked.
“No update.” Shaking his head, James growled low in his chest. “I finally agreed to let Peter and the damn security detail go after the wedding. She’s been begging me for months, telling me she just wants to feel normal, and — bloody hell — I want that for her too.”
“But?” Kalen prompted, keeping his eyes on the men playing cards.
“But the only reason I agreed was because Jake told me a year ago that he could handle it if I asked him to.” James tapped the glass on the table before lifting it to his lips for another long drink. The beginning of a haze was forming in his brain, which was foolish. He had to be sober today of all days, but the ache in his chest was like a slowly twisting piece of shrapnel.
A keepsake from their history that he wanted gone.
“So, what will ye do if Jake’s people can’t come through?” The question hung in the air between them, and James felt the shrapnel dig a little deeper.
Glancing over at his friend’s stoic profile, he knew Kalen wouldn’t judge him if he backed out on the deal he had made with Thalia. Kalen would understand his need to know she was safe… but what kind of start was that for a marriage?
She had been overjoyed when he’d finally relented, and he had done it gladly. Partly because he was tired of the little arguments the subject caused, but mostly because he could see how miserable she was. How much she resented being followed everywhere, having to check-in like a child before she made a move, constantly having to explain her detail to friends and employees.
And, as she had said, it was a constant reminder for her.
“I can’t break my promise.” James finally spoke, chasing the bitter words with another drink.
“I agree.” Kalen shrugged. “But ye can’t keep brooding on yer wedding day. Let it go, brother. It will all work out.”