Every addict has their relapse.


CONFESSIONS OF A FORMER PUCK BUNNY 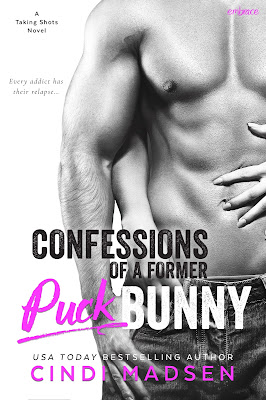 I used to be a puck

bunny, but after a hockey player broke my heart, I gave up all things hockey.
Now I’m just focused on finding a way to pass my math class so I can graduate
college.

deep, sexy voice sends fuzzy tingles through my entire body, and I’m powerless
to stop it. Which is a big problem since the hot, surprisingly funny hockey player
is my new math tutor.

thinking about how ripped Ryder is from all his hockey training, and how fun
it’d be to cross lines with him.

Confession #4:
I kissed a hockey

player and I liked it.


Confession #5: If I’m not careful, I might relapse
and fall for Ryder, and then I’ll be totally pucked.

Every
thought turned to how strong he was. How much I’d like to see all those muscles
without a shirt in the way.

Once
he’d counted off twenty-five, he stood and, as if he’d been reading my mind,
peeled off his shirt.

I
stared. Not subtly, either. Nope, totally unabashed, taking in every dip and
groove of his sweat-glistened skin.

“Since
we’re playing dirty,” he said, shooting his wadded shirt over to his bag. He
grabbed my hand. “Last machine. I’m not sure you can handle it, though.”

“I’m
not sure you can handle it.” As far
as comebacks went, not my best, but I mentioned he was shirtless and crazy
ripped, right?

He
sat down on the leg machine, the one where the seat reclined at a forty-five-degree angle, and then he lifted the weighted bar
that rested at shin-height with his legs.

He
reached for my hand, and since I’d already talked trash, I took it, even though
I was starting to think I wouldn’t be
able to handle it. He pulled me toward him, and I had no choice but to run my
shins into the weights or to straddle the machine. I chose straddling, but kept
space between us like I had earlier.

My
heart hammered against my rib cage, beating in time with his leg lifts, the
steady clink of the weights filling the air. Ryder’s eyes remained locked on
mine, and energy crackled in the air between us. He sat up enough to run his
hands up my thighs.

A
dart of heat shot through my core, and my breath lodged in my throat. Ryder’s
fingertips skimmed the skin between my pants and shirt and desire danced across
my nerve endings. Still our eyes remained
fixed on each other, and I wasn’t sure I was taking in oxygen anymore.

A
distant part of me whispered that if I didn’t stop this…whatever we were doing,
I’d be in trouble. But fighting my attraction to him was exhausting and the
ache that’d formed between my thighs grew more persistent, drowning out silly
things like common sense.

I
leaned over like I had before, my hands braced on either side of him. He lifted
the weights again, and then he brushed his lips against mine. Just a quick
slide of soft lips.

My
throat went completely dry. I pressed my palm flat against his stomach and
slowly slid it up, feeling his firm chest and the hammering of his heart, which
echoed mine.

Ryder
gripped my hips and pulled me down to sit on his lap, eradicating the space
between us. He lifted the weights with his legs a few more times, each rep
bumping me tighter to him. Friction was definitely happening, and with each
lift, it became clearer and clearer how much it was affecting him as well.

The
tiniest whimper escaped my lips and he raised an eyebrow that added even more
smugness to the curve of his tempting mouth.

Two
could play dirty. So I sank farther into his lap and he groaned.

Of
course, all it did was give me dirty thoughts and turn me on that much more.

He
lifted his legs two more times, the movement shaky. He slowly ran his
fingertips up my arm, across my collarbone, up my neck, and then he reached
back and tugged my hair free of its ponytail.


He
drove his hand into my hair, cupped the back of my head, and for one torturous
moment, time stopped, both of us suspended right there on edge of crossing
lines. Cindi
Madsen
is a USA Today bestselling author of

contemporary romance and young adult novels. She sits at her computer every
chance she gets, plotting, revising, and falling in love with her characters.
Sometimes it makes her a crazy person. Without it, she’d be even crazier. She
has way too many shoes, but can always find a reason to buy a pretty new pair,
especially if they’re sparkly, colorful, or super tall. She loves music and
dancing and wishes summer lasted all year long. She lives in Colorado (where
summer is most definitely NOT all year long) with her husband and three
children.

You can
visit her Website, where you can sign up
for her newsletter to get all the up-to-date information on her books.

a Rafflecopter giveaway
Posted by Elisha German at 2:43 PM