**Giveaway** I Knew You Were Trouble by Lauren Layne **Exclusive Excerpt**

A feisty beauty must choose between
winning back Mr. Right

or giving in to Mr. Wrong.


I KNEW YOU WERE TROUBLE

New York City’s hottest bachelors are stirring up trouble in this fun, flirty Oxford Novel, as a love triangle forces a feisty beauty to choose between winning back Mr. Right or giving in to Mr. Wrong.

Taylor Carr has it all—a sleek job in advertising, a stunning Manhattan apartment, and the perfect man to share it with: Bradley Calloway. Even after Bradley dumps her for a co-worker on move-in day, Taylor isn’t worried. She’ll get her man eventually. In the meantime, she needs a new roommate. Enter Nick Ballantine, career bartender, freelance writer—and longtime pain in Taylor’s ass. Sexy in a permanent five-o’clock-shadow kind of way, Nick knows how to push Taylor’s buttons, as if he could see right through to the real her.

Nick’s always trying to fix people, and nobody could use a good fixing more than Taylor. Sure, she’s gorgeous, with mesmerizing silver eyes, but it’s her vulnerability that kills him. Now that they’re shacking up together, the chemistry is out of control. Soon they’re putting every part of their two-bedroom apartment to good use. Then Taylor’s ex comes crawling back to her, and Nick figures she’ll jump at the chance to go back to her old life—unless he fights for the best thing that ever happened to him.

Bradley froze when he saw her, and she was pretty sure she saw the urge to turn and run flicker across his face.

Again she felt a stab of disappointment. In him. And in herself for apparently having misread him. She’d thought he was better than this.

Bradley’s eyes moved between her and Nick, and though he didn’t look all that surprised at seeing them bickering, his gaze grew hard as he saw Nick’s hand on Taylor’s face.

Nick, naturally, took his sweet time removing it, and she resisted the urge to kick his shin.

“Morning, Bradley,” Taylor said, pleased that her voice sounded calm and friendly. As well it should. She’d had plenty of practice over the better part of a year pretending that she and Bradley were nothing more than colleagues.

Other than a few close friends who knew they were dating, they’d done a mostly decent job of hiding their romantic relationship from coworkers. Better than she and Nick had done hiding their antagonistic one.

He entered the room and reached for a coffee mug, turning his attention toward the other man. “Didn’t realize you’d taken on another assignment. What for?”

“Not sure,” Nick said, checking his watch. “Have a meeting with Cassidy in a few to find out.”

“Here’s hoping it’s an offsite gig that takes you far, far away. Maybe he needs someone to cover Siberian winters,” Taylor said to Nick, even as she watched Bradley out of the corner of her eye.

“Don’t need to travel to find severe winter. It doesn’t get any chillier than right here,” Nick retorted, waving his hand over her head in a storm cloud gesture.

She shoved his hand aside, her attention still on Bradley, who was determinedly avoiding her gaze.

It was going to be darn hard to get him to see reason when he wouldn’t even make eye contact.

Nick, ever too perceptive for his own good, noticed the tension and gave a quick look between her and Bradley, his gaze turning speculative.

She shot him a warning look that clearly said, Don’t.

He shot an answering smile that clearly said, Watch me.

“Bradley, don’t suppose you’re in the market for a roommate?” Nick asked, his voice deceptively casual.

Bradley’s head snapped up, and finally, finally his blue gaze collided with Taylor’s. Dammit. Why did he have to be so beautiful? He was like a mischievous angel, all twinkling blue eyes, dimples, a sexy cleft in his chin, dark blond wavy hair . . .

“What?” he asked Nick distractedly, still looking at Taylor.

“Taylor here wants to share her original crown molding with someone.”

Bradley winced, and Taylor felt a little surge of gratitude toward Nick. He couldn’t have known it, but it was the perfect jab. She and Bradley were both into prewar architecture—had eaten up the broker’s description of all the building’s original elements.

Taylor should be sharing that crown molding with Bradley. And he damn well knew it.

His eyes met hers in silent misery—an apology that she wasn’t quite ready to accept. Heck, she wasn’t even ready to acknowledge it, because she had no intention of being dumped. Not by him, not by any man.

Taylor ignored the guilt written all over Bradley’s face as she held his gaze. “Yes, it seems I unexpectedly have a free bedroom and more rent than I can afford. If either of you knows anyone looking for a roommate . . .”

Bradley’s handsome face twisted regretfully, and he set his coffee aside, taking a step toward her, apparently forgetting—or not caring—that Nick was still in the room.

“Actually, I do,” Nick said, interrupting.

Taylor forced her gaze away from Bradley’s pleading face toward Nick’s smug one. “You know someone who needs a roommate?”

“Yup.” He crossed his arms and watched her.

She made an impatient gesture with her hand. “Who? It can’t be one of your ex-girlfriends—I don’t want to inadvertently hear any gross details about you. And not one of your frat-boy guy friends—my living room isn’t cut out for Call of Duty.”

“Yeah, because that’s all I do all day.”

His grin was slow, sly, and the very definition of trouble. “Me.”

Lauren
Layne is the New York Times bestselling author of over a dozen
romantic comedies.

A former
e-commerce and web marketing manager from Seattle, Lauren relocated to New York
City in 2011 to pursue a full-time writing career.

She lives
in midtown Manhattan with her high-school sweetheart, where she writes smart
romantic comedies with just enough sexy-times to make your mother blush. In
LL's ideal world, every stiletto-wearing, Kate Spade wielding woman would carry
a Kindle stocked with Lauren Layne books. 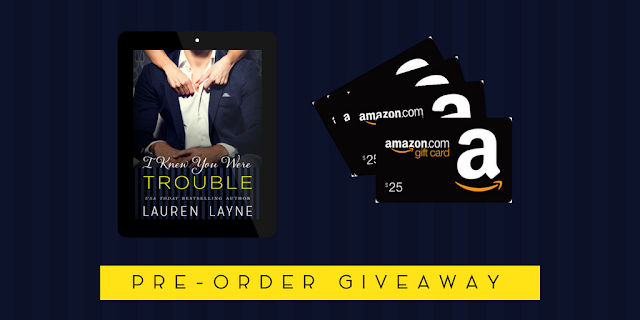