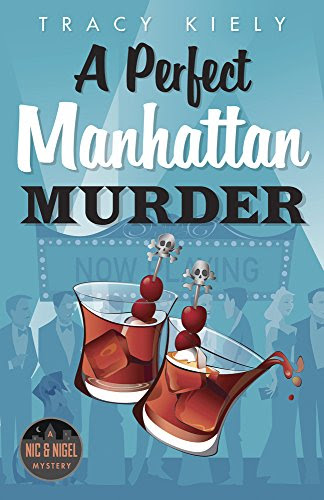 The play’s the thing, but it’s the star-studded after-party that sends sparks flying
Thrilled that their friend’s Broadway debut was a rousing success, Nic and Nigel Martini, along with Nic’s college pal Harper, are trying to enjoy the exclusive after-party. Unfortunately, all the champagne and repartee in the world aren’t enough to overlook the churlish behavior of Harper’s husband, Dan. Nic is shocked the next morning when she learns that Dan’s been murdered. Nigel thinks the world may be a better place without him.
Still, Harper’s their friend and they’re intent on helping her any way they can. The Martinis will stop at nothing—with the possible exception of cocktails and walks with their bull mastiff Skippy—to see that the killer ends up behind bars.

REVIEW:
Although I am fully enjoying cozy mysteries, the cartoonish  covers throw me, lol. However, I was locked in at the blurb. I did enjoy that (even though I am going to go back and read the other installments) even though this is the third book in the series, I wasn't lost or confused while reading the book. It can be read as a stand-a-lone.
This was a fun, light and breezy cozy mystery that doesn't leave you feeling heavy afterward. I liked the dynamic between Nigel and Nic, very much about love and respect and evening out the other. Nigel is loving and protective and rolling up his sleeves and Nic is loving and about getting to the bottom of issues and getting dirty. The situation(s) they find themselves in and how they get out of it will keep you turning the pages. 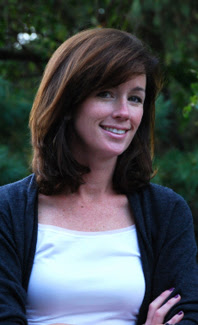 Tracy Kiely is a self-proclaimed Anglophile (a fact which distresses certain members of her Irish Catholic family). She grew up reading Jane Austen, Agatha Christie, and watching Hitchcock movies. She fell in love with Austen’s wit, Christie’s clever plots, and Hitchcock’s recurrent theme of “the average man caught in extraordinary circumstances.”
After spending years of trying to find a proper job that would enable her to use her skills garnered as an English major, she decided to write a book. It would, of course, have to be a mystery; it would have to be funny; and it would have to feature an average person caught up in extraordinary circumstances. She began to wonder how the characters in Pride and Prejudice might fit into a mystery. What, if after years of living with unbearably rude and condescending behavior, old Mrs. Jenkins up and strangled Lady Catherine? What if Charlotte snapped one day and poisoned Mr. Collins’ toast and jam? Skip ahead several years, and several different plot ideas, and you have her first mystery Murder at Longbourn.
While she does not claim to be Jane Austen, Agatha Christie, or Hitchcock (one big reason being that they’re all dead), she has tried to combine the elements of all three in her books.

May 9 – Escape With Dollycas Into A Good Book – REVIEW

May 17 – The Pulp and Mystery Shelf -SPOTLIGHT

Have you signed up to be a Tour Host?