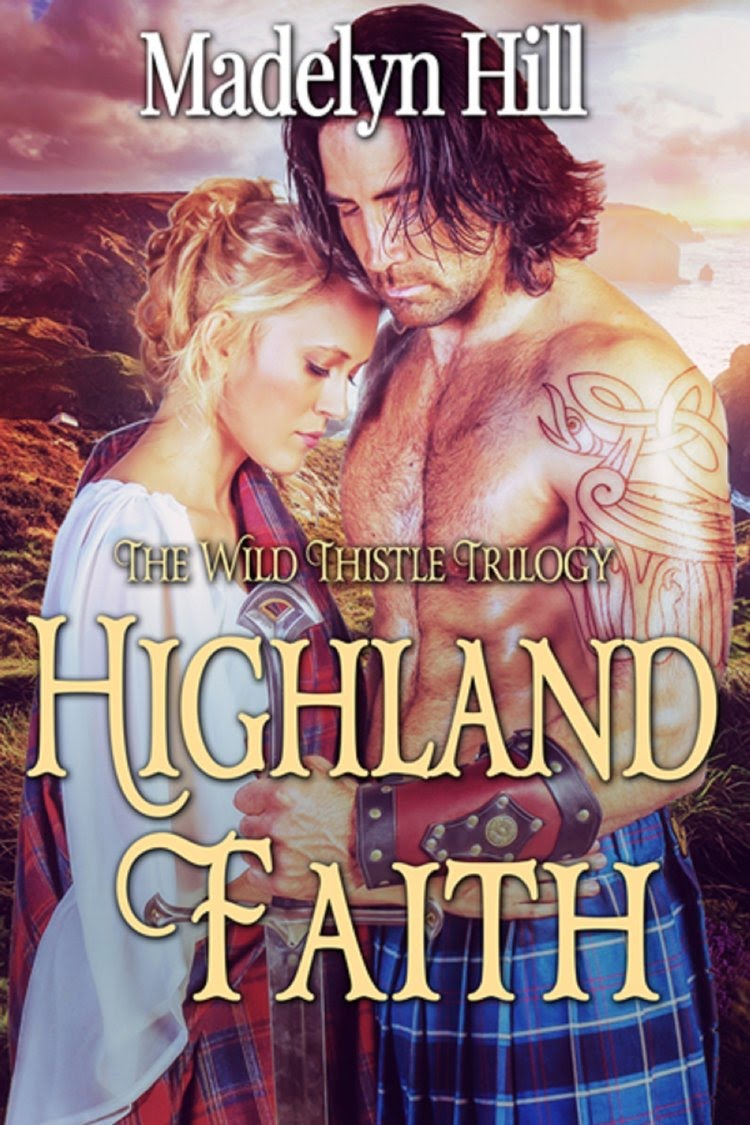 Lady Faith MacAlister lives to provide for her clan with a skill she honed while hunting with her father. Since his death and final pledge, “Through Hope, Faith, and Honor, ye can rule” she proclaims herself as clan huntress. She loves the quiet of the woods, the thrill of the hunt and the exhilaration of a perfectly placed arrow. If only she could travel further than MacAlister lands to experience adventure. When an intruder interrupts her hunt and steals her away from MacAlister land and out to the sea—she may just experience the adventure she craves.
Graeme Ross must save the family home his father gambled away and regain the respect of his father and clan. When he stumbles upon a lovely lass in the forest, he secures her for ransom. He knows she was one of the MacAlister sisters, those who pledged to rule the clan. What Graeme didn’t expect was how this beautiful woman would entice him with her strength and determination. Graeme’s attraction to Faith cannot interfere with his quest to save his home, redeem his image in his father’s eyes. Graeme lets her go—worse he betrays their growing affection by feigning she means nothing to him.
Devastated, Faith goes back to her clan with a secret she must keep until Graeme comes back to her. Graeme travels to his father with the ransom money weighting his pocket and heart. Faith is better off without him, his vagabond ways and the loathing of his father and clan.
Can Graeme reconcile with his clan and have Faith as his?
Can Faith keep her secret until Graeme comes to his senses and realizes he loves her?
Separately, they yearn for one another, together their love will take them on an adventure of a lifetime.
EXCERPT:
’Twas her sister’s fault.
Hope had married Aidan MacKerry, leading the MacAlister Clan together, and now they were acting like lovesick cows. Aye, they’d recently had another bairn and ’twas why they were smiling like amadans. But Faith MacAlister had enough of the cooing and kissing.
She had to leave the Wild Thistle Keep or go mad.
Hunting was the only option.
The size of the MacAlister Clan dictated hunting trips each fortnight to keep the larder full. Faith grabbed her quiver and bow, left word with the guards at the palisade to inform the lairds Aidan and Hope her direction, and left to find sustenance and peace.
And now, three days later she continued stalking the elusive stag. She kenned her sister would be close to sending a group of men to look for her in a day or so. Luckily she’d managed an agreement with her sister whom was also her laird. An agreement between sisters proved hard to negotiate, but she’d won in the end. And she hunted without escort as long as she never left without telling the guards her direction.
A sun filled day, just cool enough not to need too much clothing that may hinder her movement, but warm enough she didn’t need to start a fire to warm herself. She stretched in the britches she’d stolen from one of the stable hands. Aye, she’d tried the tartan her sister Hope loved to wear, but found it too revealing as she moved and climbed to find her prey. And a gown, the devil take them, ’twould make it nigh impossible to hunt and secure meat for the clan.
She moved quietly through the woods. Each footfall, purposeful, silently brought her closer to her elusive prey.
Aye, there he stood. In the morning mist that hovered just above the low foliage, a proud, beautiful stag who’d avoided her arrow for too long. Huge, with several points on his rack and a cocksure stance stating, I’m king of the forest. She hated to take down the magnificent animal. But he’d provide for her clan and her duty dictated securing meat for those who depended on her.
She drew her bow, stretching the sinew, straining her arm muscles as she prepared to let the arrow fly. The feather fletching grazed her cheek as she held her breath waiting for the perfect moment to release. She’d traveled far for this chance, stalked her prey as her father had taught her so many years ago with her so wee she could barely hold a bow, much less draw and aim. And today, her size may well again thwart her hunting. ’Twould be problematic once the massive stag was felled. She’d have to dress him in the field and lug the meat back with her. No matter, she’d manage as always.
Two more steps forward. Stared down the length of the arrow past the head, ready to release.
“Well, well, well. What have we here?” a man said.


Author Bio:
Madelyn Hill has always loved the written word. From the time she could read and all through her school years, she'd sneak books into her textbooks during school. At the age of 10 she proclaimed she wanted to be a writer. After being a "closet" writer for several years, she sent her manuscripts out and is now published with Soul Mate Publishing.

A resident of Western New York, she moved from one Rochester to another Rochester to be with the love of her life. They have 3 children and keep busy cooking, movies, and of course reading!