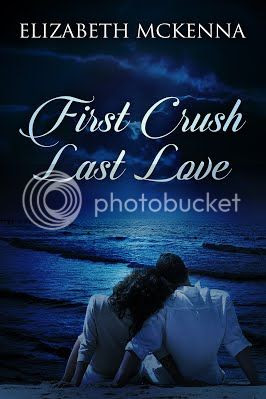 Remember your first crush? How your heart raced and your cheeks flushed whenever you saw him? Jessie Baxter does, and it’s happening again. Ten years ago, despite her best efforts, Lee Archer wanted to be just friends. Now, he wants more, but Jessie's still recovering from a psycho ex-husband. Can she learn to trust again and make her first crush into her last love?


Elizabeth McKenna’s latest novel will have you remembering the angst of high school, the grief of a failed relationship, and the happiness of true love.


The smell of bacon roused Jessie from an early morning dream of being chased across a cold, moonless beach. The feet that carried her for miles on her runs were useless in the deep sand. Every time she stumbled, her panic grew until her body no longer responded to commands. Rubbing at her heavy eyelids, she blew out a deep breath, and the last remnants of the nightmare faded away.

She squinted at the clock on the nightstand and groaned. It seemed like she had been asleep for mere minutes. After saying goodnight to Lee, she had stared at the dim stars on the bedroom ceiling and waited for sleep to bring her a needed reprieve from her messed-up life. Instead, her mind had bounced between Billy and Lee, wondering what either of them was up to and why she had to be involved.

When her stomach rumbled in appreciation of the smoky sweet smell, she sat up with a jolt. Lee Archer was in her mother’s kitchen making breakfast, and it smelled damn good. She jumped out of bed and twirled in a circle, unable to decide what to fix first. Her frizzy curls stood out in every direction, and her breath reeked from last night’s garlic-laced meal.

She grabbed a pair of running shorts and checked the hall before dashing to the bathroom. A few minutes later, she emerged with her hair in a messy bun and her teeth scrubbed to the point of drawing blood.

In the kitchen, Lee stood at the stove pushing eggs around a pan and wearing last night’s rumpled clothes and a shadow of a beard. Jessie clamped down on her bottom lip. It was too much to take in.

“You’re awake. I left you some coffee.” He gave her a crooked smile before turning his attention to the frying bacon.

She eyed her morning drug on the far side of the kitchen and willed her legs to move in the direction of the coffee maker. After dumping three sugar packets into a cup, she poured the heavenly brew with a sigh. Looking up, she frowned at Lee’s amused expression. “What? I like sweet coffee.”

“Breakfast will be ready in a minute. Can you put down the toast?” He nodded with his chin at the toaster.

While she slept in, Lee had set the table, cooked eggs and bacon, poured juice, and cut three mums from her mother’s garden for a centerpiece. Yeah, making toast was the least she could do.

“What do you do for a girl the next morning when she actually sleeps with you?”

Lee’s eyes ran up and down her body, and then something akin to a growl came from his throat. Maybe she should have put on sweats instead of shorts.

“I like cooking. Remember Denny’s restaurant? I think if I hadn’t become a cop, I would have been a chef.”

They settled at the table and ate in silence for the first few bites.

“Is it OK?” He pointed at her plate with his fork.

She nodded in appreciation. “Better than OK. I usually grab a granola bar for breakfast. This is a real treat.”

“I was thinking we could swing by my place so I can get cleaned up before heading to the station. I’ll need you to make a statement before I can run the knife for prints.”

Her gaze went to the kitchen island where the hunting knife sat wrapped in the plastic bag. “Billy was arrested for a bar fight in college. Would his prints be in the system for that?”

“We’ll bring him in for questioning.”

“Can you hold him? Like put him in jail?”

“That will be up to the DA and the judge.”

Putting her fears into words would make them too real, but from the grim look on Lee’s face, she didn’t have to.

“You could file for a restraining order,” he said.

“Would that help?” She wasn’t sure she had the strength for more legal action against Billy. Like most divorces, theirs had been ugly, full of half-truths and name-calling. She had even secretly wished him dead at one point to put an end to it all.

“To be honest, probably not, but it would make arresting him a lot easier if he keeps stalking you.”

Stalking her. She hadn’t thought of it like that, but it was what Billy was doing. Her knuckles whitened as she gripped her fork. Three years. Before this weekend, it had been three years since she had talked to her ex-husband. Why couldn’t he move on? If their love had been so wonderful—if they had been soulmates—he never would have cheated on her. That was the one thing she had never understood when he fought the divorce. It was obvious they weren’t right for each other. Why couldn’t he see that?

She nibbled on a piece of bacon, while her mind searched for new answers to old questions. After a few more bites, she pushed her plate away.

“Changed your mind about my cooking?”

“It was wonderful. I guess I don’t have much of an appetite this morning.”

“How about I clean up while you shower?” Lee gathered their dishes and headed for the sink.

She shook her head in disbelief. “How are you not married?”

Over his shoulder, he gave her a smile that ignited small fires in several sensitive areas of her body. “I have no idea.”

“Well, the cockiness might be a turnoff,” she said, covering her desire for him with a dose of sass.

He looked down at his crotch. “There’s nothing wrong with my—.”

His low chuckle sent flames over her cheeks. He turned on the kitchen faucet and squirted dish soap into the sink. “Go take that shower.”

Jessie darted from the room. It would need to be a cold shower, she thought, as she pounded up the stairs.

Elizabeth McKenna works as a full-time technical writer/editor for a large software company. Though her love of books reaches back to her childhood, she had never read romance novels until one Christmas when her sister gave her the latest bestseller by Nora Roberts. She was hooked from page one (actually, she admits it was the first love scene).


She had always wanted to write fiction, so she combined her love of history, romance and a happy ending to write Cera's Place and Venice in the Moonlight. Her short story, The Gypsy Casts a Spell, is available for free on her website http://elizabethmckenna.com/. She hopes you will enjoy her first contemporary romance novel, First Crush Last Love, as much as others have enjoyed her historical romances.


Elizabeth lives in Wisconsin with her understanding husband, two beautiful daughters, and a sassy Labrador. When she isn't writing, working, or being a mom, she's sleeping.