**Giveaway** A Mind To Kill by John Nicholl **Guest Post** 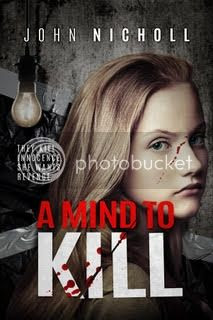 The hunters become the hunted…


When Rebecca's childhood abuser avoids prosecution, it sets her on a path to revenge, revenge on any man who preys on the innocent.

Twenty-three-year-old Rebecca poses as a child online and sets her trap, luring one predatory sex offender after another to their deaths.

When a severed head is found washed up on a windswept estuary beach, the police begin their investigation.


The internationally bestselling author of White is the Coldest Colour is back with a heart-racing, electrifying psychological thriller packed with suspense.

Brilliantly gripping, A Mind To Kill will have you hooked from the very first page and holding your breath to the heart-stopping and shocking ending.

‘And are you likely to?’


Grav shook his head, wishing he had a different, more optimistic reply to offer. But he had to tell it like it was. The man deserved the truth. However unwelcome. However unpalatable. ‘I can’t see it happening.’
Smith was on his feet now, his voice raised and reverberating with raw emotion. ‘He touched her. He made her touch him. My little girl. It went on for months. She’s six years old, for fuck’s sake. The dirty bastard violated her, and you’re telling me he’s going to get away with it! How the hell am I supposed to tell Jan? It’ll break her heart.’
Grav looked on, temporarily lost for words as the father disintegrated in front of him.

‘Refreshments coming up. Here you go boys …’ She stopped and stared. ‘What is it, Dai? What’s happened?’
‘I’ll uh … I’ll tell you later.’
‘Dai?’
He opened his mouth as if to speak, but then closed it again, unable to find the words.
She shrieked, dropped the tray to the floor, turned away from the two men and ran upstairs to Rebecca’s bedroom, where she clutched a soft toy to her chest and closed the door against the world.
‘Did you see the state she’s in?’
‘Yeah, I’m sorry.’
‘You’ve let us down, Sergeant. You’ve let me down. You’ve let the missus down, and worst of all you’ve let Rebecca down. You do realise that, don’t you? This is real life, not some fucking game.’
Grav reached out and placed a hand on one of Smith’s broad shoulders, reluctantly choosing to ignore the wailing coming from the first floor. ‘I gave Sheridan a seriously hard time, if you know what I’m saying. We kept him at the station for as long as the law allowed, but he just sat there in total silence with a smirk on his ugly face, refusing to answer a single question for hour after hour.’
Smith pulled away, his face contorting as he choked back his tears. ‘You’re telling me you did your best. You’re telling me you pulled out all the stops. But it wasn’t good enough. It wasn’t nearly good enough.’
‘No, it wasn’t. Not even close.’
‘So how’d it go so horribly wrong?’
‘Sheridan’s one clever bastard. He knew there was no unequivocal forensic evidence; he knew his wife had given him alibis for some of the relevant dates and he knew the only witness was a six-year-old little girl. He believed he had a good chance of walking away if he kept his mouth tight shut, and he was right. The bastard knew exactly what he was doing.’
‘So he’s free to get on with his life as if he did nothing at all?’
‘Look, Dai, I’d slice the cunt’s balls off if it were up to me. But, yeah, that’s the crux of it. In the eyes of the law, he’s an innocent man.’
David Smith screwed up his face and spat his words. ‘I’ll tear the dirty bastard apart if I see him.’
‘And I wouldn’t blame you, Dai. Honestly, I wouldn’t. I’d want to do much the same thing myself in your place. But Janice needs you here. Rebecca needs you here. What good would you be to them banged up in prison for fuck knows how long?’

10 Things You Didn’t Know About Becoming a Published Author

2. 80 per cent of the world’s books are sold on Amazon

3. While a small number of authors make a fortune, most earn a very modest income.

4. Signing with a publisher is no guarantee of financial success.

6. Most major publishing houses will only accept submissions via a literary agent.

7. Agents receive a sea of submissions, most of which are never read.

8.The publishing world has changed.  It’s never been easier to get your work out there via platforms like Kindle Direct Publishing.

9. It’s far easier to get a quality agent and a publishing deal if you prove yourself as an independent author first. Demonstrate that
your books sell, and proceed from there.

10. If it goes well and you sell a ton of books, you may decide that being independent isn’t such a bad thing after all.


What people are saying about A Mind To Kill:

‘It chilled me to the core.’ Book Reviews To Ponder

‘Don’t miss out on this gripping page-turner of a psychological thriller.’

‘A very dark psychological thriller fraught with tension and the sense of evil radiating from the pages.’ The Book Revue Cafe

‘This is an author who likes to write and jump just a little over the edge to keep his readers gasping.’ Read Along With Sue

‘Packs a punch between the eyeballs that will keep you reeling all the way to the end.’ Ann Girdharry - Bestselling author

‘Brilliant, emotionally charged story telling that will leave readers on their edge of their seats until the very last page.’ Tome Tender Book Blog

‘Another superb read by John Nicholl.’ Cheekypee Reads And Reviews

John Nicholl, an ex police officer, child protection social worker and lecturer, has written three dark psychological suspense thrillers, each of which have been Amazon international bestsellers, reaching # 1 in multiple categories in the United Kingdom, France, Spain, Australia, Canada and the USA. John is always happy to hear from readers, bloggers or the media, and can be contacted via his author website at: http://www.johnnicholl.com. Rights enquiries should be directed to Mr Toby Mundy - Literary agent at TMA. A Mind To Kill was published on 5 August 2017.