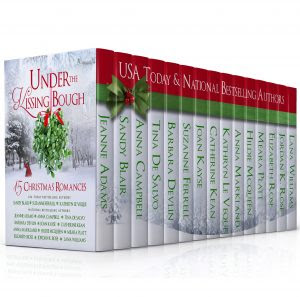 15 brand-new novellas. 15 best-selling romance authors. A holiday-themed collection like no other.

According to lore, the origins of which date to the late 12th century, no lady should refuse a kiss beneath the mistletoe, else she will not marry in the next year. In exchange for the kiss, a berry is removed from the sprig until all of the berries are gone and no more kisses can be stolen. Some also believe that a sprig of mistletoe collected from a local church and placed beneath a maiden's pillow will inspire dreams of her future husband.

What happens when fifteen daring heroines pin their hopes on mistletoe, a little luck, and a kiss in this multi-genre, limited edition holiday collection from 15 bestselling authors? Pure holiday magic! 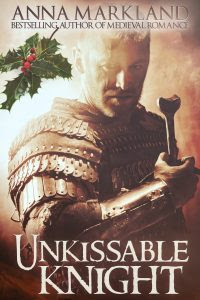 Dervenn de Roure is a hero of the Battle of Hastings, the same conflict that left Victorine de Toeni orphaned and facing poverty. She must marry to survive. Dervenn's scarred face bears testimony to his sacrifice, but the haughty Victorine cannot overlook the fact he is a Breton, not a Norman. It might take the scheming of an unlikely matchmaker like William the Conqueror to make her see Dervenn is the man she needs. 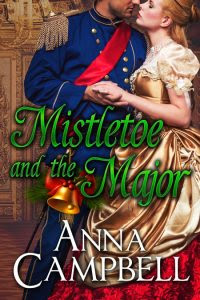 MISTLETOE AND THE MAJOR BY ANNA CAMPBELL

After eight tumultuous years of war, Major Lord Canforth returns to England a hero. But now his greatest battle awaits – the fight to win the heart of the wife he hasn’t seen since their wedding. DANCING UNDER THE MISTLETOE BY LANA WILLIAMS

A woman running from her past...

Katherine Flemming gratefully accepts an invitation to spend Christmas at a new friend’s country estate, allowing her to escape London with her secrets still intact. Her past has caught up with her, and she must leave everything behind to start over. Again.

A man unwilling to face the future...

Cole Dumont takes one day at a time, spending his days seeing to the needs of his tenants but never his own. Unable to bear the idea of enduring another Christmas alone, he gratefully accepts an invitation from a neighboring estate with the fleeting hope of surviving a holiday filled with too many memories.

A stolen moment under the kissing bough...

Well aware of the trouble chasing her, Katherine avoids forming connections with others but something about the quiet baron tugs at her. Cole’s guilt convinces him that he doesn’t deserve happiness, yet the woman he kisses beneath the mistletoe makes him wonder if fate has something else in store.

Can one kiss and the magic of Christmas unite two lonely souls?