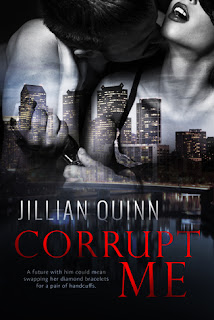 
Izzie Rinaldi has everything going for her. All she has to do is make it through her senior year of college, and then she’ll be off to law school, one step closer to assuming her position at the head of her family’s empire. After a chance encounter with the campus bad boy, Izzie can’t get him out of her head.

Luca Marchese, the smooth-talking son of the most notorious man in Philadelphia, is used to getting what he wants. He hasn’t forgotten the girl he knew as a child, and now that he has Izzie’s attention, Luca will stop at nothing to have her.
Luca’s defiance of the law turns Izzie on more than she cares to admit. She wants Luca to corrupt her in every way possible, despite his reputation as the king of one-night stands. Their attraction is undeniable, but their desire for one another isn’t enough for Izzie to overlook visits from federal agents and the potential ruin of her family.
Linked to Luca and a criminal underworld, Izzie discovers she’s more like him than she thought. But a future with Luca could mean swapping her diamond bracelets for a pair of handcuffs.
*Corrupt Me is a standalone novel that is the first book in the Philly Corruption series.

—
EXCERPT:
Most of the guys on campus, my brothers included, would give their right nut for one night with Izzie. I’d been waiting for a shot with her for years, and I wasn’t about to waste this opportunity.
Mark threw his hands out at his sides, as if saying, I don’t know. “You were a mess last time, Luca. When your families stopped talking to each other, I thought you were going to lose your shit. You were heartbroken over Izzie when we were kids.”
“That’s why I’m not letting her go this time.”
He ran a hand through his spiky auburn hair. “That girl is nothing but trouble. I’m just trying to look out for you. Do what you want, but we both know how this is going to end.”
I reached for my door at the end of the hallway and turned until I was facing Mark. “I’m taking a shower. Meet me downstairs later, if you wanna come.”
I thought I heard Mark sigh, and then his door closed.
Now that I’d made up my mind about Izzie, I couldn’t turn back. We’d met years ago, long before college, at a fundraiser our families attended, and even as a little girl, Izzie was gorgeous. She obviously forgot about it. Either that, or she preferred to believe we weren’t cut from the same designer fabric.
I had to see if she would give me a chance. What was I thinking? She’d yelled at me one time, and I was already stalking her. I did not stalk women, especially not to get laid.
But Izzie was so much more than that. She deserved better than my usual treatment.
Author Bio:
Jillian Quinn was born and raised in Philadelphia, Pennsylvania and currently lives in sunny Cape Coral, Florida where she still pretends it’s okay to drink hot chocolate and curl up on the couch with a good book, even when it’s ninety degrees outside. From an early age, writing and storytelling have been her passion. In her spare time, she loves creating fictional worlds and living inside the minds of her characters as well as reading and watching hockey.
Jillian is also a successful book blogger, dubbed by her followers as The Queen of Rants after making her blog, Rant and Rave About Books, a popular destination in the bookish community because of her honesty and passion for books.
Corrupt Me is her first novel with other young adult and new adult titles to follow.

Of the three, Luca was the most attractive. And, judging by his cockiness, that wouldn’t be news to him.
Luca cleared his throat, a smirk tugging at his mouth. “Twice in one day.”
He tapped his knuckles on the table. It drove me crazy—the air of confidence he exuded, the whole I-own-the-school mentality. What a pompous ass.
I rolled my eyes and chugged the last sip of my soda. “Yay for me,” I deadpanned, holding the straw to my lips as I fought a smile. “Now, I know you’re stalking me.”
“Where are you really going tonight, bella donna?”
As much as I wanted to smirk, I liked hearing him tell me I was beautiful. Somewhere in the back of my mind, I struggled with my feelings for Luca. The butterflies doing somersaults in my stomach churned up acid from my picked over mystery dinner.
“Bella—” Luca said, breaking the silence.
“That’s not my name,” I just about spit the words. Even though Bella was a nickname for Isabella, I never liked that name much. Luca’s older brother, Mario, always called me Izzie when we were kids, and I thought Izzie better suited me. “You’re an ass, you know that?”
Luca ran his fingers through his dark hair, flashing a very Preston-like smile. “Let me take you out.”
“Not a chance.” My first thought at his words, “take you out,” was that he wanted to whack me, and that provided me with my own personal entertainment. But I knew he’d be pissed if I mentioned that aloud.
I almost felt bad when he frowned, but he recouped quickly. His looks made it so hard to hate on him for too long. Still, I couldn’t allow myself to become involved with someone like him. In some ways, it was a conflict of interest. There was a reason our families severed ties over the years even though I suspected Grandfather had kept in touch with Luca’s father.
I leaned on the table, meeting his gaze. “Is that part of your winning charm? You think you can give me that shit-eating grin, and I’m going to drop to my knees? Like I said, I’m not interested. If this is about earlier, I’d rather give you the money and be done with whatever this is we’re doing.”
He laughed. “I’m not that bad, babe.”
I snorted at his comment, annoyed by his pet names.
He scratched his jaw, the corner of his mouth opening a little bit. He didn’t need game. He had that crooked smile and that sexy mouth I wanted to smash my lips against.
Posted by Elisha German at 1:00 AM