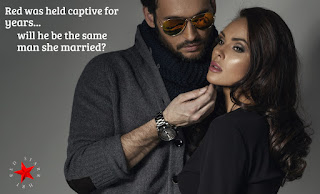 It has taken Catori Starr years to come to terms with the death of her husband during a failed hostage rescue mission.   She’d overcome her tragedy better than anyone could expect, but no one could truly understand the crushing black hole left in her grieving heart.  She’d moved on to the best of her abilities, even reopening the doors to their business and operating a hostage rescue team she’d personally recruited.

Brendan “Red” O’Neill’s last mission didn’t go as planned.  He’d ended up becoming a political prisoner to a fragmented national government in a country that was supposed to be an ally to the United States of America.  He lost count of the endless days spent wasting away throughout his years in captivity, but never once had he forgotten the vision of his wife’s beautiful face.  She was the only motivation he’d managed to keep for his own sanity as he clung to life.

Breathe.  That’s what Starr had to keep telling herself over and over as she discovered the closely held secrets surrounding the facts of that fated mission.  Her husband had been captured alive and she would move heaven and earth to bring him home, even if that meant sacrificing everything they had—including her own life.

Series Description: Red Starr HRT is a paramilitary hostage rescue team that was originally formed years ago by two retired Marine Master Sergeants. Upon the death of Catori Starr's husband, Brendan "Red" O'Neill, she took a much needed hiatus to deal with her guilt and all consuming grief. Two years later Starr is clawing her way back and ready to lead a fresh team of five cherry-picked former Force Recon Marines. Red Starr HRT takes cases the FBI and other agencies won't touch, from domestic assignments bordering on the grey edges to missions abroad against savage terrorist regimes. Follow along as Kennedy Layne conveys each of their stories as they work together on high risk rescues that lead them down perilous paths of passion, intrigue and suspense...

Get your hands on RED’S SALVATION now:


Kennedy Layne is a USA Today bestselling author. She draws inspiration for her military romantic suspense novels in part from her not-so-secret second life as a wife of a retired Marine Master Sergeant. He doubles as her critique partner, beta reader, and military consultant. They live in the Midwest with their teenage son and menagerie of pets. The loyal dogs and mischievous cats appreciate her writing days as much as she does, usually curled up in front of the fireplace. She loves hearing from readers--find out how to connect with her at www.kennedylayne.com.