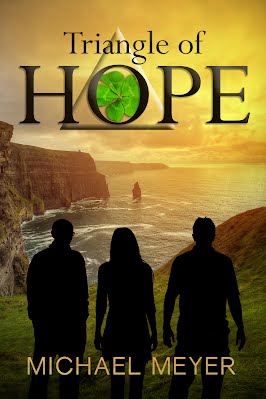 Life grinds you down, but there's always hope--and sometimes it can come in the strangest of ways....

After being battered by life's cruelness, three unlikely friends find themselves drawn to a small Irish town seeking something--anything. Finding solace in one another, their quest throws them together and they make a courageous stand.

Clint Westerly was a success until a choice he makes blows his world all apart. Tanya Wilshire is broke and hell-bent on committing to her mother's final deathbed request. 84-year-old Seamus Harrington needs to right an ancient wrong before time runs out.

Together, this unlikely trio of unexpected allies forms a Triangle of Hope against all odds, their disparate stories uniting for a thrilling conclusion that will leave the reader breathless.

Excerpt:
1 – Los Angeles, California
His impending death hung in the air like thick smog, smothering everything in its path, obscuring a parade of ups and downs, the unevenness of thrills and chills that defined his life’s existence. It was eerie and scary, but also rather comforting, much like being in a warm bed on a cold night, like shivering while being filled with excitement at what was going to happen next. The news could very easily have been broadcast to those of his past and present, but he had made certain that all the speakers had been turned to mute. He had made the firm decision to meet his destiny without any chance of intervention by anyone. He was all alone in this, his final act.
The hotel room was a bit dark with all the lights switched off, but outside the window the sky was as bright blue as Cinnamon’s eyes had been. At least that’s the way it looked to Clint Westerly. For some reason his mind had suddenly flashed on Cinnamon of all things. Cinnamon had been the perfect cat. Paul Newman eyes, he had called them, which sparkled in the sunlight and glistened in the dark. Such beautiful eyes. Such a wonderful cat. Such a pity that eighteen years was all the time he had had to frolic through the world. Cinnamon had been the perfect cat, the perfect companion. The little cat had been much more than a friend. He had actually been like a son to both him and Sheila. Anybody who knew them would surely concur. That’s just the way things were in their wonderful world.
Their world. What a crock! What world? Everything gone now, vanished, disintegrated into thin air, the tiniest particles vaporized into non-existence.
Review:
Boy does this story work your emotions! It took me on a roller-coaster of emotions. But this is also a beautiful story of insight and inspiration. this story definitely makes you look at yourself in the mirror at how you treat others and to be more mindful of your actions. I also think people will react to his story and the three characters differently; depending on their own life - like I said - emotional roller coaster and insight. Great writing and talented author. Be forewarned - this story is about grief, sadness, and tough times... but there is a light at the end of the tunnel. This is a good read that I recommend.

As a recent retiree from a forty-year career as a professor of writing, he now lives in Southern California wine country with his wife, Kitty, and their two adorable rescue cats.