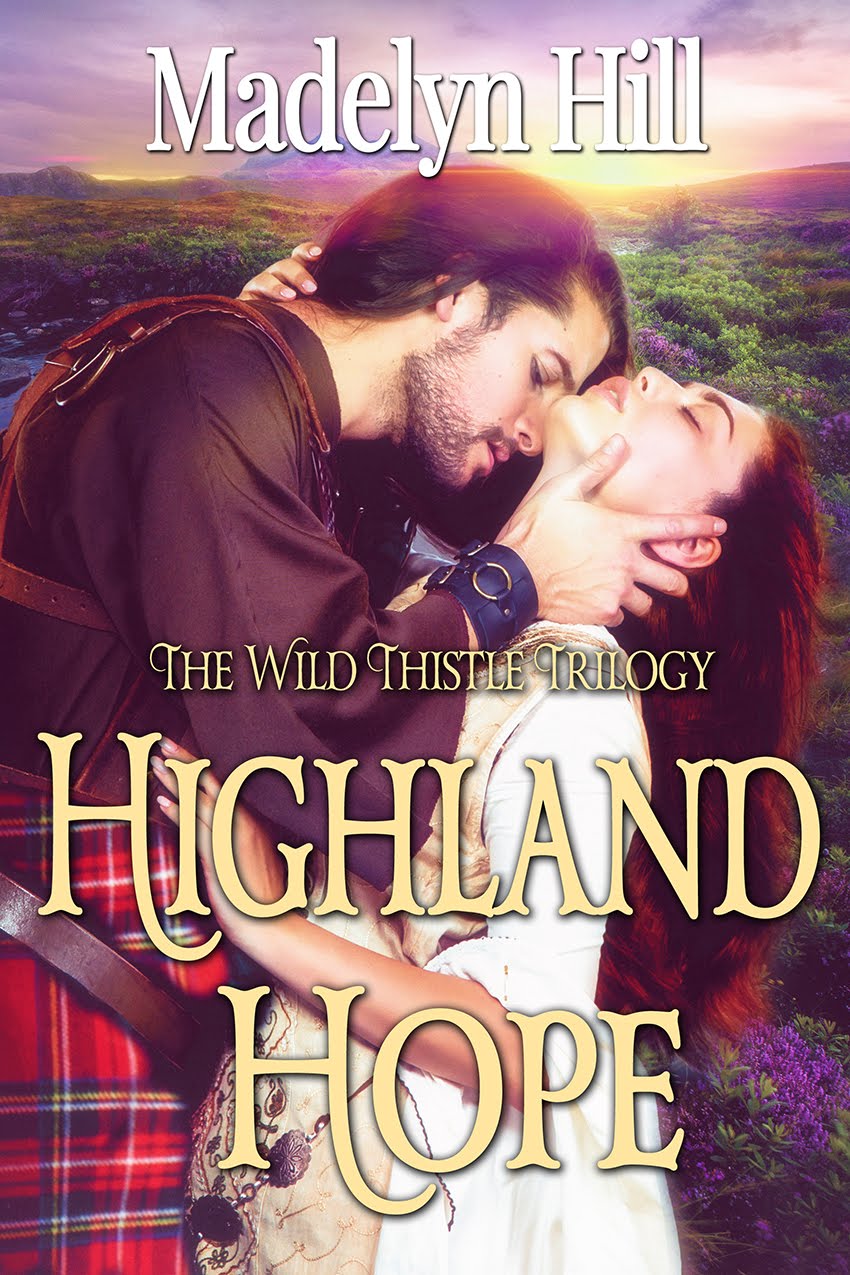 Her clan was her everything—until he walked in~

“Remember, lasses. Through Hope, Faith, and Honor, ye can rule,” were the last words Lady Hope MacAlister’s father spoke before dying. Those very words direct her every action and thought. Sword fighting and leading the men of her clan was second nature to Hope and she has little time for herself or any thoughts of love. Until Aidan MacKerry is captured spying on the clan.

She is beautiful, strong, and quick to pull a sword. But when he kisses her, all thoughts of the lairdship Aidan MacKerry seeks flee his mind. When the enemy continues to undermine Hope, Aidan is determined to aid her—only he didn’t think he’d lose his heart to the Laird of Wild Thistle Keep. When the enemy reveals Aidan’s secret, he must fight for his right to be laird and prove, despite their differences, he loves Hope.

The enemy refuses to back down and continues to threaten not only Hope, but the security of the entire clan. Only together will they be able to save the clan and save their love.

Madelyn Hill has always loved the written word. From the time she could read and all through her school years, she'd sneak books into her textbooks during school. And she devoured books daily. At the age of 10 she proclaimed she wanted to be a writer. After being a "closet" writer for several years, she sent her manuscripts out there and is now published with Soul Mate Publishing. And she couldn't be happier!

A resident of Western New York, she moved from one Rochester to another Rochester to be with the love of her life. They are busy with their 3 children and a puppy named Cannoli! They love to cook, go to the movies, and hang out with friends.

#1 – Do You See Writing as a Career?
Absolutely! While I do have a “day” job, my writing has created another career for me.

#2 – What was the Hardest Part of Your Writing Process?
I think having the confidence to trust my voice and story writing capabilities to send my novels out there for critique, contest, and to publishers.

#3 – Did you have any One Person Who Helped You Out with Your Writing Outside of Your Family?
I’ve had some great critique partners, however my friend and author Misty Simon has been a wonderful sounding board and cheerleader! Without her encouragement, I wouldn’t have sent Wolf’s Castle to Soul Mate Publishing.

#4 – What is next for your writing?
I have sketched out 2 series. One set in the Highlands featuring five heroes who may not be kin, but are brothers. The other is a Cozy Regency with a strong female heroine and an American hero.

#5 – Do you have an addiction to reading as well as writing? If so, what are you currently reading?
Absolutely! I just finished Only You: Duke of Rutland Series III by Elizabeth St. Michel and Releasing the Demons (The Order of the Senary) by L.D. Rose. Both wonderfully written and engaging books.

Her clan was her everything, until he walked in~
#meninkilts #ScottishRomance #Highlanders

Amazon
Barnes and Noble: (paperback only)