When wealthy brewery owner Austin Fitzgerald meets sexy saleswoman Evelyn Benedict, angry sparks fly. They seem destined to clash, until a hot hookup in a cold beer cooler changes everything.
For Austin, it's a life-altering moment that sets him on a path away from his birthright, while Evelyn must face her fears about committing to a man considered the playboy of the micro-brewing world.
The power of preconceived notions nearly tears them apart—until they meet up with brew master Ross, who opens their eyes to a deeper, even more erotic connection.
But three strong personalities don’t always make for the best emotional mix and when a simple misunderstanding causes chaos, it’s up to Ross to somehow repair the tattered shreds of their relationship.
Goodreads- https://www.goodreads.com/book/show/33398179-tapped
Amazon: https://www.amazon.com/dp/B01N0XLM0E/ref=cm_sw_r_cp_ep_dp_oerHyb84ZBD1S
Totally Bound: https://www.totallybound.com/book/tapped

A hot hookup in a cold beer cooler changes everything… 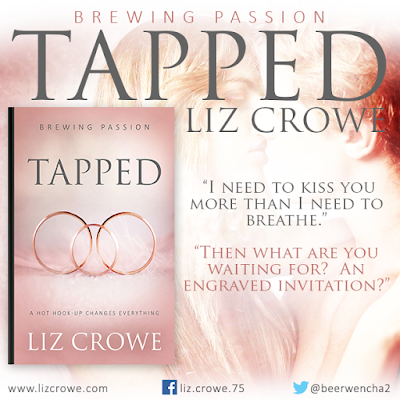 About the Author
Amazon best-selling author, mom of three, Realtor, beer blogger, brewery marketing expert, and soccer fan, Liz Crowe is a Kentucky native and graduate of the University of Louisville currently living in Ann Arbor. She has decades of experience in sales and fund raising, plus an eight-year stint as a three-continent, ex-pat trailing spouse.
Her early forays into the publishing world led to a groundbreaking fiction subgenre, “Romance: Worth the Risk,” which has gained thousands of fans and followers interested less in the “HEA” and more in the “WHA” (“What Happens After?”).
With stories set in the not-so-common worlds of breweries, on the soccer pitch, in successful real estate offices and at times in exotic locales like Istanbul, Turkey, her books are unique and told with a fresh voice. The Liz Crowe backlist has something for any reader seeking complex storylines with humor and complete casts of characters that will delight, frustrate and linger in the imagination long after the book is finished.
Don’t ever ask her for anything “like a Budweiser” or risk bodily injury.

Excerpt:
“Austin?” Her voice behind him made him stand and stretch, his cock already tingling in anticipation. “Where did you go? Jesus, what time is it? Get your ass back here.”
He grinned. “Think you can just boss me like that, woman?” He leaned on the door frame, drinking her in with his eyes. “Because you can’t.”
“I’m not bossing, dear. Just suggesting.” She let the sheet fall aside, revealing her completely naked body. His smile widened when she bent one knee and reached down to touch herself. “You know, only suggesting that you get your sweet self over here and help a girl out.”
He grinned, yanked off his shirt and shorts, and dove into the warm nest of sheets and Evelyn. The frustration at her most recent rejection was already forgotten in the amazing smell of her skin and the lovely sound of her moans as he did what she suggested, for an hour or two.
Later, when they lay tangled in damp sheets, catching their breath, their fingers clasped together between them, Evelyn sighed. “So, tell me something,” she said. Austin forced himself up to full consciousness as best he could.
“Hmm,” he said, turning to face her, taking in the flushed, well-fucked look on her face with more than a little self-satisfaction.
“How is it…I mean, with two, um, guys and a girl?”
Austin hesitated, then put her knuckles to his lips, buying himself some time.
She pulled her fingers free of his, sat up and wrapped the sheet around herself. One thing about his Evelyn, he mused, watching her. He would never accuse her of being indirect. About anything.
“Don’t baby me, Austin. I mean it. I want to know.”
“I have no doubt that you want to know, my love.” He propped himself on one elbow and ordered his thoughts.
“Don’t think about it, damn you. Just…tell me.” She swept her hair up off her neck, making his mouth water at the sight of her flushed skin. Making him want to grab her, hold her down, lick the sweat droplets and lose himself in her all over again. “Yo, earth to lover boy,” she demanded, snapping her fingers in front of his face. “Spill it. What’s it like? I mean do you… Would you… Oh hell, never mind.” She turned and started to climb out of bed before he reached out and grabbed her arm.
“Hang on a second. I don’t mind telling you. I guess I didn’t expect you to want to know. Most…women…aren’t that into it.”
She let him pull her back into the warm bed and curled into him so he was pressed up against her back, his lips on her bare, delicious shoulder. “Stop it,” she whispered. “Tell me what it’s like to have sex with a woman with another guy in on the act.”
He sighed and held onto her. “It’s…pretty amazing,” he admitted. “I mean, I can’t speak for the women I’ve… We’ve…well, you know what I mean.”

Posted by Elisha German at 2:25 PM