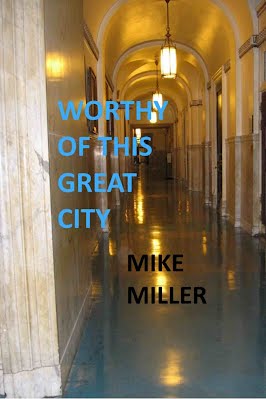 
Ruth Askew, a minor celebrity, is spouting some highly incompetent philosophy about the end of virtue. Con Manos, a journalist, is attempting to uncover a political scandal or two. Add some undistinguished members of City Council, an easy listening radio station, a disorganized charity, a prestigious Philadelphia newspaper, and any number of lawyers and other professional criminals. In Worthy Of This Great City the compelling stories of two stubborn individualists intertwine in a brisk, scathing satire that invites you to question everything you think you think about today's most discussed issues: populism and elitism, the possibility of truth, the reach of profound stupidity, and the limits of personal responsibility in these post-truth, morally uncertain times.


Author Bio
If you know my website and Twitter addresses (asmikemiller.com and asmikemiller, respectively), you must realize Mike Miller is only an author name. It's not a matter of privacy
or secrecy; anybody can find me with minimal effort. It's about keeping things separate. My writing is about what appears on the page. It's not about my personal politics or religion or history.

Worthy Of This Great City is a B-game book. I'm ambiguous about this, being interested in money like most people, but I don't want to compete with a slick professional cover or smooth editing so I've stuck to a sort of reasonable, human middle ground. I value those things for what they are, of course, but I see them as artifacts, part of a system of publishing that fought like hell for a week's worth of shelf space, that fought to catch the eye, not the mind or heart.

As my character Con Manos says: "It's a revolution, isn't it?" I say: Why fight on the side of the enemy? Why imitate and thus perpetuate a business model that stifles originality? Just to show you can? Unless, of course, you're fighting to attract the eye, not the mind or heart.

I've played a joke with this novel - my first, incidentally. Played with the idea of narration and who can be speaking after all. It's all very literary.


Q.  What inspires your writing?
A. A lifelong search for the words I need. That’s a combination of enormous need or ambition and an appreciation of language. Words are my power; I’m certain that once I  figure out the right ones, juggle the concepts with sufficient expertise, I can master my life. It’s the great quest, the great illusion.

Q.  What is your favorite thing about being a writer?
A. Getting something right. Those breakthroughs when you see where you’ve been going, when you understand what you’re been writing about all along.

Q.  What is the toughest part of being a writer?
A. The waiting for ideas to come together. Waiting to move forward.

Q.  If you could not be writer, what would you do/be?
A. I think I’d be working in fine arts or at least crafts. I love sculpting, painting.

Q.  What would the story of your life be entitled?
A. Forward

Q.  What is your favorite book of all time?
A. Franny and Zooey. When I first read it as an adolescent I was astounded that a book could express my private questions and concerns, could consider such matters important in life and in literature. It set me off on a different course, and for that I’m incredibly grateful.

Q.  Which character from ANY book are you most like?
A. Maybe Alyosha from The Brother Karamozov. I’m hopeful, maybe naïve. I want to believe. I want answers.

Q.  What character from all of your books are you most like?
A. Ruth Askew. I’m impulsive, proud, stumbling clumsily around looking for ideas about God, all that. Like all of us, Ruth is essentially blind, eager to take pride in her gifts but gifted at avoiding responsibility for her actions.

Q.  Which book would you love to take a weekend vacation inside of?
A. Lost Horizon. Who wouldn’t want to be young forever?

Q.  What is your favorite season?
A. SUMMER! I’d make an excellent beach bum.

Q.  What inspired your book cover(s)?  Or what is your favorite book cover and why?
A. Well, that’s a story, because I never wanted to put too much emphasis on the externals, only on text. Covers ultimately have to do with brick-and-mortar shelf space. So I used one of my own photographs, one that seemed to capture the mystery and promise of City Hall’s corridors. It’s golden and beautiful and makes for a cover everyone seems to hate, I assume because it isn’t what a cover is supposed to be.

Q.  Tell me something funny that happened while on a book tour or while promoting your book.
A. I don’t know that it’s amusing funny, more curious, but I stopped doubting myself. I could see from various critiques exactly what the reader did or did not grasp of what is after all a very complex, layered work structured to read easily. It can be appreciated simply as a satire or as philosophy or as a commentary on narration and the novel. I think that’s correct, in a way. It reflects the complexity of every living moment, and the ease with which we necessarily ignore that marvelous complexity. Anyway, somewhere along the way other people’s opinions stopped mattering to me, and as a typically insecure writer I find that remarkable.

Q.  Are you working on something new?
A. Yes. It’s about immigration law, a political asylum case, but I don’t want to get into more detail because almost certainly everything will change. As in Worthy of This Great City, the fact of the narrator is important. And again as in Worthy, places and times sometimes move subtly, with no sharp edges but merely a shift in influence.

Q.  Anything you want to say to followers of this blog or those that are just stopping by?
A.  The novel is infinite; it’s a world of unexplored possibilities of both structure and content deserving of constant serious change, not pathetic tricks of cosmetics and inserted media. Text doesn’t need to apologize. But I think we’re entering a new era where major publishing houses produce mainstream, commercial products but also act as distributors, and indie authors are as respected as indie filmmakers.

EXCERPT from Worthy of This Great City:

Earlier that day, I lay in the shade with only my bare toes exposed to the vicious sun, part of a modest audience similarly disposed beneath the modest fringe of trees surrounding the field. Light fell down through the foliage, thick victorious beams that described powerful angles in their descent inside the usual breathtaking green cathedral. Around me the grass was withered and compressed into a flattened mat over ground still saturated from the previous night’s thunderstorms; everything smelled of baking wet earth, sunscreen, and greasy event food. I don’t remember any intrusive insects or even visible birds except for a couple of extremely distant hawks, dull specks in the otherwise empty sky.

Another respectable scattering of spectators occupied the baking field, most sprawled directly in front of the small Camp Stage, true fans eagerly upright despite the merciless heat. So just as expected, one of those perfectly innocent afternoons you buy with the ticket, monotonous while deeply nourishing, readily absorbed through the whole skin like childhood summers.

I didn’t know about the witches yet, but they were out in force. Yeah, it’s a silly description but I don’t know how else to capture the awful effect of those damn women. So they were witches who’d been summoned by a highly demanding assembly of affluent suburbanites, people accustomed to commanding natural forces. And while arguably these were all benevolent females who only meant well, with witches you never know how it’s going to turn out.

Every August for more than a decade I’ve headed out to Schwenksville for this dependable throwback party. And not precisely to enjoy the music, because although it commands my absolute respect I find it too intense for everyday entertainment. It’s a kind of church music, an unashamed church of humanity: pure sound, plaintive and honest, twanging and rambunctious, dulcimer gentle. Fitting, then, for this late-summer pagan rite in honor of righteousness, and I immerse myself in it to perform a spiritual cleansing of sorts, processing across the fields from one rustic venue to another, affirming a succession of bluegrass pickers and ballad wailers and theatrical tellers of old tales. And it’s a mildly uncomfortable ritual in another sense, but that’s because of the mostly undamaged people, the one’s who wholeheartedly enjoy everything and applaud too often.

As with anything religious, there are incredibly subversive undercurrents longing to manifest, easy to exploit by those portending witches. Two of them performed that day, one with such tragic skill and clarity it unintentionally aroused huge amounts of self-loathing and subsequently resentment, at least in me. The second inspired a joy vigorous enough to move the plot. And the third exerted an indirect but equally damning influence courtesy of her own celebrity, her mere idea inciting a shaming nostalgia. In fact it was dangerously stupid to speak her name aloud. All three arrived wearing absolute certainty.

This current festival setting, the Old Pool Farm, is perfectly suited to the occasion. There are wide fields to accommodate the generous crowds, a nicely crisp and sparkly creek, and the requisite gates and groves, all at a situation remote enough to evoke a wholly separate culture despite easy proximity to the city. Although that’s not difficult, because even today you only have to poke your nose outside the nearer suburbs to spot a rusty silo on some decrepit farm with another of those filthy black-and-white, diarrhea-spewing dairy cows leaning against a sagging wire fence, its pelvis practically poking through its muddy hide. Peeling paint and hay bales directly across the road from another mushrooming pretentious development, a slum of dull, identical cheapjack townhouses. So despite the fervent country claptrap the festival is essentially a metropolitan scene, drawing a sophisticated crowd, and therefore in one sense condescending, an insult.
Murmurs of anticipation brought me up on my elbows to discover Hannah Lynch already onstage, a typically modest entrance. I sat up and paid attention, catching sight of her inside an amiable circle of probable musicians, a glimpse of her face and one thin shoulder between competent-looking backs in cowboy or cotton work shirts, all of them endlessly conversing there in surprisingly gentle voices.

Until finally they broke apart and here she came gliding towards the front of the tiny platform, moving within a reputation so illustrious it made her physical presence unlikely and you had to struggle for it. A tiny bird of a woman, an elderly, fragile sparrow with fine gray hair and hazel eyes and translucent skin, nodding to us and smiling nicely with small unremarkable teeth while seating herself on a wooden folding chair. She was dressed like good people, like a decent Christian farmwife in a faded print skirt and cotton blouse of mixed pastels, pink and beige and blue. Only with dangling silver jewelry to be noticed, since after all she was a major star.

With this one unshakable article of faith: that her famously quavering soprano was entirely unrelated to her own ordinary self, more of an imposition or a trust, an undeserved gift from God that in no way merited personal praise. So she has stated. And accordingly she exuded genuine empathy with all of us waiting out there for her, straining forward to better capture the spirit and stamina investing each word. A curve of laughter lit her face, and there was grief there too, but nothing to diminish that serene spirit.