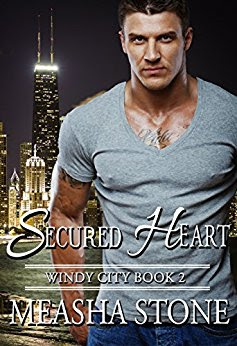 As a child, Kelly dreamt of having a handsome husband, beautiful children, and a dog playing in the backyard. But life rarely turns out the way you plan, and she fears her clock is ticking. Still on the prowl for the perfect husband, she becomes bolder in her search. A night that starts out like any other, ends up being the one that changes everything. As the owner of a security company, Kendrick McFall takes safety very seriously. His first instinct is to keep Kelly at arms length. However, she isn't his to command,and she isn't easily persuaded to stay away from the world in which Kendrick lives. A world that she craves. Taking her under his protection seems to be the only way to keep her safe from the ghosts of his past, and protect her from new threats. Along the way he doesn't just seek to secure her safety, he wants to secure her heart.

REVIEW:
This is the second book in the series so it is preferred to read book one first (then book three and four) but it could be read as a stand a lone. However, there is a developed story line that I think the readers would benefit from reading book one to understand Kelly and her background better. She is an interesting character. Working in the legal world at a high end firm yet she's a free spirit type that seems to be down for just about anything. However, that aside, she is no dummy. She is intelligent, sharp, and quick-witted. She has a good support system with her friends and a pretty good life (aside from being a bit promiscuous). She has plans for her life, or so she did. She seems to have gotten lazy in that department. Not caring as much. There is still that puzzle piece missing from her life: love. She is lonely and needs that void filled. This is where Kendrick enters the picture. He is rough around the edges but perhaps opposites attract and they both fill the gaps that are missing for the other.
I think their romantic feelings blossom in this book when he actually needs to save her from a too-real scenario. Due to this situation, she tells him a secret about herself wanting to go to a BDSM club which he makes her promise to only go to when he is on security duty. But simply watching out for her is only the beginning...
I am really enjoying the fact that there is an actual story line, a plot...aside from the sexual content. And, the sexual content has an actual purpose aside from making the story steamy.

“You don’t.” He shrugged. “I don’t think I would laugh. I can’t imagine you saying something that would make me laugh in answer to my question. But if you’re asking me if I’ll laugh at your wants, needs, or desires…I can promise you I won’t.”
“At the club—”
“At the club, I wasn’t laughing at you. I was trying to protect you.” His voice dropped, making him sound regretful, apologetic. “I went about it the wrong way. I’m sorry if it hurt you.”
The silence hung between them, and she seemed unable to make her mouth move.
“Now, finish what you were saying.”
“Last night, before you showed up, I was watching a romantic comedy. Well, really, it was an action movie, but it was so cheesy… Anyway, there was a love scene… It did nothing for me.” She tucked her hands under her legs.
“It didn’t turn you on?” He entwined his fingers together in his lap.
“No.” She kept her eyes on his hands. There was a strength in them that she suddenly wanted to feel on her skin. The roughness of his fingertips trailing down her arms, the firmness of his palms on her hips—these thoughts were drowning her.
“What would have turned you on?” His question pulled her from her fantasy.
“If he had grabbed her by the hair.” Her answer sounded meek. “If he had tossed her onto the bed. Anything that would have shown his power over her. If she had obeyed a command, even a small one…” She trailed off, unsure of continuing and making a fool of herself again.
“Obedience turns you on?” His voice lightened.
“Yes.” She nodded, but did not look at him.
He dropped his right foot from his knee and scooted over on the couch, until their knees touched.
He reached over to her, lifted her gaze to his with a fingertip under her chin, and held her eyes with his. “Me too.” 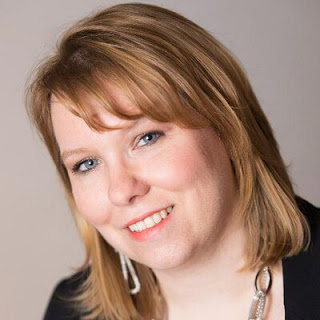 Southern New Hampshire University. Her vanilla writing has been published in the online magazine efiction and the DuPage Writers Group annual journal Possibilities. When she’s not writing, she’s reading and spending time with her kids- who are just as creative and crazy as her.

Posted by Elisha German at 7:32 PM