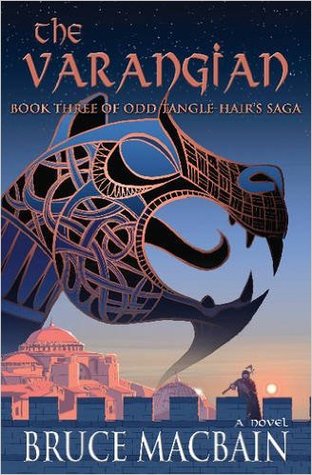 The Varangianis the final entry in Bruce Macbain's Odd Tangle-Hair Saga and brings Odd's challenging adventures to a climactic and satisfying finish. On a secret diplomatic mission to the Emperor's court in Miklagard, the Viking's name for Constantinople, Odd meets the members of the fearsome Varangian Guard whose elite Viking members served as the Emperor's personal bodyguards. Harald, his former master and the man he's been sent to murder, now serves among the guards. Court intrigue and imperial dynastic disputes provide the backdrop for the conflict between Odd and Harald. LikeOdin's ChildandThe Ice Queenbefore it, The Varangianis dictated by Odd to a young scribe whose own life is changed by the telling of the tale."

REVIEW:
This was most definitely an out of the box read for me. I  think it is because of that that it was hard for me to get into. But I kept in mind the synopsis caught my attention so I read on. And, once I got into the story line, it was quite the intrigue. I can see why people enjoy this type of read. It's a historical novel which is why I opted to read it even though the cover threw me. The fact that this is during the second millennium(AD) really takes the reader back into time. Reading about Odd and all the adventures that happened kept me turning the pages. I was pleasantly surprised that I enjoyed this book.

Bruce Macbain holds degrees in Classics and Ancient History and was formerly an Assistant Professor of Classics at Boston University. He decided to stop writing scholarly articles (which almost no one read) and turn his expertise to fiction—a much more congenial medium. His previous novels include two mysteries set in ancient Rome (Roman Games, The Bull Slayer) and the first two novels in the Odd Tangle-Hair series (Odin’s Child, The Ice Queen).
For more information, please visit Bruce MacBain’s website. You can also find him on Facebook, Twitter, Google+, and Goodreads.

Posted by Elisha German at 4:59 PM