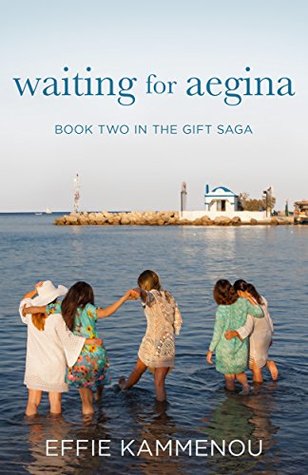 Book Two in The Gift Saga: The continuation of Evanthia’s Gift …

In 1961, five little girls moved into a suburban neighborhood and became inseparable, lifelong friends. They called themselves the ‘Honey Hill Girls,’ named after the street on which they lived. As teenagers they shared one another’s ambitions and dreams, secrets and heartaches. Now, more than thirty years later, they remain devoted and loyal, supporting each other through triumphs and sorrows.

Evanthia's Gift follows the life of Sophia Giannakos. In Waiting for Aegina the saga continues from the perspectives of Sophia and her friends as the story drifts back and forth in time, filling in the gaps as the women grow to adulthood.

Naive teenage ideals are later challenged by harsh realities, as each of their lives takes unexpected turns. Now nearing their fiftieth year, Sophia, Demi, Amy, Mindy and Donna stand together through life-altering obstacles while they try to regain the lighthearted optimism of their youth.

REVIEW:
Waiting for Aegina is a continuation of The Gift Saga. I am loving this series thus far. I love it because it's real. It's about real friendship and loyalty; which I love. There's some time travel in this story in the sense that the author takes you from present time to flashback memories to fill in the gaps on how they all became such good friends. I am reading both books and so far this author did not disappoint. This is such a good story about womanhood, sisterhood, friendship, loyalty, as well as the triumphs and difficulties in life.

EXCERPT:
Sophia was seated at the edge of a worn leather chair with her eyes fixed on Dean, tears streaming down her cheeks. Ignoring the sting from the cuts and bruises on her forehead and nose, the soreness on the left side of her body, and the sharp pains coming from her casted arm, she gently gripped her husband’s hand, hoping her touch would will him into consciousness.

Not twenty-four hours ago, they were having the time of their lives—reconnecting with old friends, dancing, and maybe drinking a little too much. Which is why Sophia took the keys from Dean and insisted she drive home.
Their joyful night came to a crashing end when a bright light reflecting from her side view mirror blinded Sophia. It was as though everything after that happened in slow motion—the sound of crunching metal and screeching tires, a surreal feeling that the car may have flipped over and over, and the shattering of breaking glass when a car struck theirs, slamming into the passenger door where Dean was seated.
When their vehicle came to a sudden halt, Sophia found that the car had not turned over as she thought, yet somewhere in her confused and disoriented mind, it had registered that they must have spun around.
Clouds of white surrounded Sophia and she screamed out to Dean, afraid he was unconscious or severely injured from the impact the car had taken.
Her door flung open. “Sophia, I have to get you out of the car. Help is on its way.”
“Dino! Help Dino!” Sophia desperately pleaded, not sure to whom she was speaking to. It was so dark and she was blinded by fear.
Slapping away the airbags obstructing her view, she called out to her husband. “Dino! Talk to me. Say something.”
Struggling to open his eyes, Dean groaned, but his lids remained closed.
Michael, who had been following in the car behind, could see that metal from the car had compressed around the lower half of Dean’s body and, without help, he would not be able to pull him from the wreckage.
Sophia reached for Dean, but Michael stopped her.
“It’s better not to touch him until the EMTs get here.”
Panic-stricken after watching the erratic driver crash into her brother’s door, Demi helped Sophia out of the car and clung to her.
Within minutes, the dark road was polluted with flashing lights and the sound of blaring sirens. Rescuers came swiftly, assessing the situation quickly deciding to rely on the ‘Jaws of Life’ to cut Dean out of the car.        Another medic came to Sophia’s aid, placing her arm in a splint and tending to the open gashes on her face and arm.
“Forget about me! Take care of my husband,” she demanded, her voice strained from fear.
“Your husband is in good hands.” The female medic looked up after she finished wrapping Sophia’s arm. “They’re about to load him into the ambulance now, ma’am.”
“Take me to him.”
“Of course.”
The uniformed woman guided Sophia to where Dean was strapped on a stretcher and about to be lifted into the back end of an ambulance. Too many people surrounded him, making it impossible for Sophia to get close.

Effie Kammenou is a believer that it is never too late to chase your dreams, follow your heart or change your career. She is proof of that. At one time, long ago, she'd thought that, by her age, she would have had an Oscar in her hand after a successful career as an actor. Instead, she worked in the optical field for 40 years and is the proud mother of two accomplished young women. 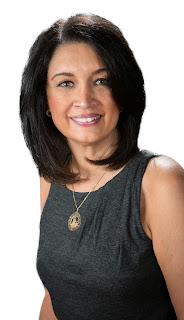 Her debut novel, Evanthia’s Gift, is a women’s fiction multigenerational love story and family saga, influenced by her Greek heritage, and the many real life accounts that have been passed down. She continues to pick her father’s brain for stories of his family’s life in Lesvos, Greece, and their journey to America. Her interview with him was published in a nationally circulated magazine.
Evanthia’s Gift: Book One in The Gift Saga was a 2016 award finalist in the Readers Favorite Awards in the Women’s Fiction category.  Waiting for Aegina: Book Two in The Gift Saga is Kammenou’s latest release.
Effie Kammenou is a first generation Greek-American who lives on Long Island with her husband and two daughters. When she’s not writing, or posting recipes on her food blog, cheffieskitchen.wordpress.com, you can find her cooking for her family and friends.
As an avid cook and baker, a skill she learned from watching her Athenian mother, she incorporated traditional Greek family recipes throughout the books.
She holds a Bachelor’s Degree in Theater Arts from Hofstra University.

Posted by Elisha German at 2:02 AM