Give Me Chaos (Wolfegang #5) By Jillian Ashe

This is my stop during the book blitz for Give Me Chaos by Jillian Ashe. This book blitz is organized by Lola's Blog Tours. The book blitz runs from 28 February till 6 March, you can view the blitz schedule here. 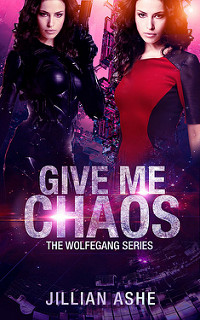 Blurb:
The fifth book in the Wolfegang series follows Katerina back to the top secret military base, Enzo, where she is Lt. Donnellyâ€™s prisoner. The lieutenant puts her through tests and experiments to find out what makes her so special, and why the genetic enhancements arenâ€™t degrading her brain. Heâ€™s looking for his own cure. Katerina might not survive his search for answers until General Ryojin shows up and changes the game completely.

You can find Give Me Chaos on Goodreads


You can pre-order Give Me Chaos on Amazon

General Ryojin wasnâ€™t particularly fond of the genetic program on the Enzo base, but on occasion it produced some excellent results. Lieutenant Donnelly was one of the few great accomplishments of the Heishi Project and at present he ran the program.

The general had been ordered by his superior to check on Lt. Donnellyâ€™s new pet project. It was a project heâ€™d been promised by the lieutenant would cure some of the less than pleasant side effects of their patented serum. If Lt. Donnelly was correct in his assumptions he would be up for promotion.

The general slid his hands in his pockets and walked through every check point without stopping to present identification. Soldiers saluted as he passed by. Every general was given a certain level of security clearance provided by a chip inserted in their arm. Checkpoints automatically registered the serial number and allowed them to pass.

He flicked his longer than regulation hair out of his face. There werenâ€™t many people above him in rank and no one brave enough to enforce the policy on hair length. Heâ€™d lost count how many checkpoints heâ€™d passed as he made his way deeper into the base, through levels of security, a tiny fraction of the population on the base even knew existed.

The Heishi Project was one of the best kept secrets of the Federation.  Some of the details leaked to the masses. The enhanced soldiers who came from the project became a type of bogeyman. No one knew the exact extent of the project and so wild tales arose to fill the holes.

Ryojin stopped outside the last checkpoint. The soldier stared and fumbled with his â€˜sirâ€™ as he tried to salute at the same time. Ryojin knew the effect he had on his soldiers. He was the youngest general in history at thirty-three but it wasnâ€™t always the reason they stared. Ryojin was almost pure Japanese, and one of the few remaining noble families able to keep their bloodlines pure.

He was a rarity among the mutts of humanity.

Ryojin heard screeching and a crash from the genetic labs. His eyebrow rose at the young soldier. Those were not sounds he wanted to hear. The young man stuttered again and opened the door for him, trying to explain but his words were jumbled. Ryojin sighed. He walked through the door and around the corner.

The general stopped in his tracks as he witnessed something he did not usually see in the labs. A young woman with the whitest skin heâ€™d ever seen screamed at three of his soldiers. All of the soldiers were men and all of them were at least three times her weight. She flipped one over her shoulder and hit the second with enough force to drop him like a rock.

The general frowned. He got a look at her eyes. No, she wasnâ€™t Japanese. Something was not right. He intended to find out what exactly was going on.

Donnelly had some explaining to do.

The general walked forward with purpose as she whipped around to face the third soldier. The soldier gritted his teeth but didnâ€™t back down. It amused Ryojin to see him try to take her on though it was clear how outmatched he was. She feinted a punch and then kicked him in the genitals; a low blow.

When she turned on the general, neither of them hesitated. Her fist flew at him with impressive speed. He caught it easily enough without breaking stride and spun her around. He held her close, incapacitating both her arms without too much effort. The girl was strong, but not stronger than him.

General Ryojin was the shining achievement of the Heishi Project.

She growled low and animalistic, bucking against him but he held her tight as he quickly inspected her. The girl was malnourished which angered him. There were marks and bruises all over her body, some were from the mandatory tests, but there were other marks that shouldnâ€™t have been there.

He sighed as the realization came to him. Donnelly had been slipping again without reporting it. They couldnâ€™t manage the sickness if it wasnâ€™t reported. The lieutenant would need to be dealt with.

A doctor came out casually from her lab with a syringe in hand. He arched an eyebrow at her nonchalance. â€œCare to explain, Lyn?â€

Lyn Tallis was a woman he knew from childhood, but they had taken separate paths to reach the point in their lives they were at now and it was mere coincidence she worked for him.

The girl in his arms laughed in a manner which concerned him. He frowned down at her and wondered again where sheâ€™d come from. Pure Europeans were nearly extinct. At most a few thousand remained in the icy north of Earth and his guess was generous.

â€œOnly a test, cousin,â€ Lyn said. She stepped over one of the fallen soldiers and approached the girl. â€œShe did amazingly well.â€

Suddenly the weight in his arms doubled as the girl collapsed. He almost stumbled forward before he caught himself against the sudden change in balance.

He watched the exchange closely with narrowed eyes. Clearly there was more going on than had been on the report. This girl was a captive subject and not a willing one. That information changed everything.

â€œWhere is the lieutenant?â€ Ryojin demanded. He needed to be debriefed. Immediately.

â€œI didnâ€™t know you had cousins,â€ the girl said.

Lyn grimaced, her version of a smile. â€œOf course, Katerina. Now you can go back to your cell or finish the test.â€

Ryojin propped her up and let her go. When he finally looked into her eyes they were dead and lifeless. None of the fire in them he had seen moments before. He needed answers.

Her eyes snapped to his and the grey flashed like lightning. The sudden light allowed him to witness the raging storm inside before shuttering once more as she followed Lyn.


Earlier books in the series

Firefly meets Dark Angel in the YA/NA Sci Fi Adventure series available in Kindle Unlimited. -- Katerina used to be a normal college girl until she wakes up 500 years in the future and finds out her twin Kris, is still alive. Will she be able to survive in the new dark future to find him?

All four books are available in Kindle Unlimited 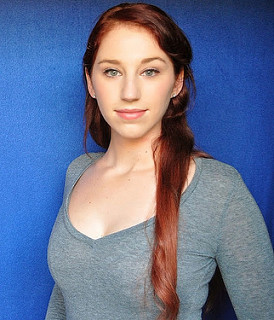 Jillian Ashe lives and works in San Diego, California with her husband and son. While writing the Wolfegang series she attended University in pursuit of a Masterâ€™s degree in English and Creative Writing. She has been writing since age twelve and has written for The La Jolla Light Newspaper. She is part of almost every fandom out there and loves makeup, Steampunk, and geeks out on a regular basis.

Jillian is working on finishing the Wolfegang series.

Posted by Elisha German at 6:15 PM